Thanks, Bill Heywatt! I AM Marc Hershon, your every-other-episode host of Succotash Shut-In, the Soundcast Stimulus Package. I switch off with Tyson Saner, who had some great clips last show, Epi206, including Full Court Chat with Dave Shilling, Sensibly Cynical, and New Player Has Joined. You can still grab it or any of our past episode at our homesite, SuccotashShow.com, as well as Apple Podcasts, Spotify, Stitcher, the Laughable app and all over the web. 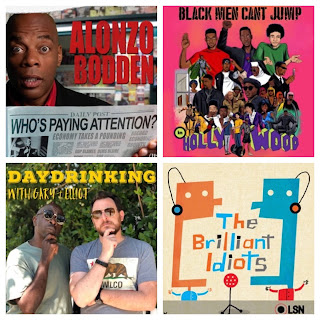 THIS, however, is Episode 207, and I also have a lovely late Spring harvest of comedy soundcast clips for your listening pleasure. Today we’ll be hearing from Alonzo Bodden: Who’s Paying Attention?, Black Men Can’t Jump (In Hollywood), Daydrinking with Gary & Eliot, and The Brilliant Idiots. This episode is brought to you by our two long-term sponsors: Henderson’s Pants, featuring their Wake Island Abbreviated Trousers, and Trumpoetry.com, the website featuring the biting political verse by our very own engineer and producer, Mr. Joe Paulino. And, time permitting, we are going to bring back an old feature of the show at the very end: The Tweet Sack!

Before proceeding, I want you to know that I know this is a very, very weird time, both around the world and here in the United States. It could be the weirdest time ever, maybe, but it certainly is in my lifetime. It’s one of the reasons Tyson and I decided to start producing more rather than less editions of this show. He’s a relatively new father. I’m a relatively old man. Going out into the streets is a piss-poor option for us, but we are here for you. Whether that’s the you who is also sheltering in place and just trying to stay sane, or that’s the you who has been wronged by 400 years of prejudice, degradation, and violence which is still being perpetuated to this day.

Regardless of where you fall on the 2020 Apocalypse scale, Succotash is doing what we can to try to bring a little light and levity into your life, by introducing you to comedy podcasts that you may not be aware of, or that you have heard of but have yet to check out. In the scheme of things, it may not be much. It’s definitely standing none-to-nose with police in riot gear, armed with military hardware. And it’s not offering amazing frontline early responder or incredible unswerving medical care from health care personnel who keep putting their lives on the line without hesitation to help others. But it is what we can do, for free and on a weekly basis, in hopes of making your mental and spiritual load just a little lighter as we move, as a people, to a brighter tomorrow.

Alonzo Bodden: Who’s Paying Attention?
First up is a clip from a soundcast I reviewed just this past week at Vulture.com, as part of the This Week In Comedy Podcasts column. And that’s Alonzo Bodden: Who's Paying Attention? Alonzo is a very funny comedian who you may recall from his winning of the seasons of NBC’s Last Comic Standing show back in the day. His weekly soundcast features him turning his comedic wit and straightforward wisdom on the news. Last week he found the news so full of …news…that he just tackled as many headlines as he could without going to deep on any one story. Our clip features the host calling several folks on what he terms their “bullshit apologies.”

The Brilliant Idiots
Charlamagne Tha God and Andrew Schulz are The Brilliant Idiots.  Charlamagne’s commentary is unfiltered and from the heart. He’s been described as “Hip hop’s Howard Stern.” You may know him from The Breakfast Club, the hit syndicated morning show. Zooming in on the co-host position is Andrew who is a standup comic from New York but I don’t know much more about him – his bio on their homesite says he thinks bios are lame. Okay. These guys can be kind of goofy but they’re always funny. Or almost always - understandably, one can’t expect to get a lot of lightheartedness out of comedy soundcasts right now that are tuned into what’s happening in this country. I think it’s important to hear how these Charlamagne and Andrew break down what fucked up idiocy happened to result in Breonna Taylor getting gunned down in her home by the Louisville Metro Police Department just after midnight on March 13th.

Black Men Can’t Jump [In Hollywood
Our next clip comes from a show that I’ve been a big fan of since they first hit the podwaves. Hosted by Jonathan Braylock, Jerah Milligan, and James III, Black Men Can't Jump [In Hollywood] is a comedy soundcast has guests come in who are actors of color in “the biz”, and they review films through the lens of race and diversity issues. The episode from a couple of weeks back started out with a frank and somber lead-in about hos the hosts were feeling about the unrest going on across the US and the world, and their feeling relevant ot the Black Lives Matter movement. But in the spirit of “the show must go on”, they welcomed guest Niccolo Aeed to examine the 1998 terrorism action thriller The Siege starring Denzel Washington, Annette Benning, and Bruce Willis. Our clip is from their set-up of the movie itself.

Daydrinking with Gary and Eliot
Billed as a "cocktails and comedy" soundcast, Daydrinking with Gary and Eliot features exceptional actor and improvisation comedian Gary Anthony Williams as well as home mixologist Elliot Blake. They like to have celebrity friends drop by for a drink during the sane light of day, although the dropping by these days is virtual via Zoom, and they often have other friends in on the Zoom chat as well, just to make it a party. Most recently they welcomed standup comic Dan Ahdoot, who has his own great foodie soundcast called Green Eggs and Dan. Our clip revolves around something he’s been cooking up while quarantined at his parents house: lamb brains. Be warned: Dan gets into some details here…

There it is, then. Epi207 is in the archives. Thanks for stopping by, downloading, streaming or how ever you chose to experience Succotash Shut-In, the Soundcast Stimulus Package. Always a pleasure. Tyson Saner will be dropping Epi208 next week with some more lovely soundcast clippage for you, and I plan to return for Episode 209 with an unreleased pilot episode for a comedy soundcast I wrote and produced called Sleevetalkers: Adventures of the Third Detail, about the overnight shift of the Secret Service at the White House.

Until then, be good to each other and please pass the Succotash!