Saluton, estas mi Tyson Saner, your host for this and every other episode of Succotash Shut-In, the Soundcast Stimulus Package (formerly known as Succotash, The Comedy Soundcast Soundcast) for the forseeable future. If this is your first time listening, thank you and welcome.

This is the miniaturized form of Succotash, The Comedy Soundcast Soundcast, created by Marc Hershon and we have been trading off hosting episodes since we reached our 200th episode which closed out our 3rd season over a month ago. Episode 205 was our first "Chats" variant of Succotash Shut-In and features a talk with soundcaster, Improvisational comedy performer, author, and one of my favorite guests on this or any soundcast, Greg Proops. Why not give it a listen if you've a mind to? 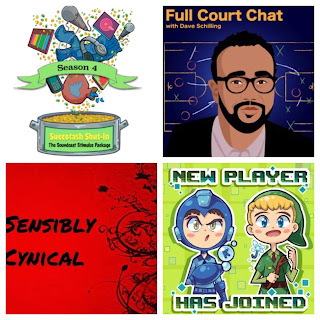 So, I've got another clips episode because I haven't really been able to secure anyone for a short, recorded chat yet but I remain open to the concept. I have several people I'd be interested to talk to...so be on the listen-out. I have three clips for you this week. I was thinking of "theming" the episode but then abandoned that idea. I'll try again in the future...or at least I'll plan to try but Holy Placeholder, can stuff change quickly and often!

I've got clips from the soundcasts Full Court Chat with Dave Shilling, Sensibly Cynical, and New Player Has Joined. (Please notice that you can find clickable social media and websites links of the soundcasts featured below.)

This episode is also sponsored by Henderson's Pants Summer Stock Slacks and by Trumpoetry.com.

Let's do this, shall we?

New Player Has Joined
Each episode from Starburns Audio explores the video games people love and why they love them. Why do we imprint hard on certain games, and how do those games imprint on us? Keith Kingbay and Jesse Neil chat with celebrities, game developers, industry pros, and some folks you’d never guess are into video games. Our clip was harvested from their Epi131, "Far Cry 4 - Keith & Jesse (Like Father, Like Son) Run from a rhino and learn how to use a bow and arrow real fast, because Keith and Jesse are jumping into Far Cry 4. There will be drugs. There will be rocket launchers. And there will be a very eccentric fashion designer.

Sensibly Cynical
Sean Pratten and guests talk about topics that are on the mind of the masses...while taking the discussions to sensibly extreme levels. We clip their episode from January 20th of this year, entitled "The Lore of Grand Theft Auto." where Sean is joined by Stoy from the EXPCast to talk about the legendary action-adventure video game series, Grand Theft Auto!  This Iconic franchise took over the video game world in the late 90's and early 2000's and has developed a cult following — even to present time. They also talk the Pokémon Go phenomenon, Resident Evil, and more!  Turn back the clock with this amazing Podcast!

Full Court Chat with Dave Schilling
Sportswriter and journalist Dave Schilling (ESPN, Bleacher Report, The Ringer, The Guardian) sits down with the biggest names in sports and culture for in-depth, no-holds-barred conversation. The questions will be hard. The answers will be harder. We clip an episode from just last month, in an episode featuring Dave's interview with Steve Bartman. He's the absent-minded baseball fan who caught a foul ball in Game 6 of the 2003 National League Championship Series that cost the Chicago Cubs a chance to go to the World Series for the first time since 1945. That single moment changed the course of baseball history forever. Death threats, public shaming, and a life spent in hiding were Bartman's rewards for his brush with infamy. The scapegoat of the 2003 NLCS has never agreed to an interview...until now.

Ta-dah. Another ending for another show. There are SO very many soundcasts out there in the world and we can only offer but a few at a time for you to sample, and that's going to have to be good enough for the time being. I hope you enjoyed their content alongside our content.

I'll tell you, I never clip something that I didn't finish listening to and I also often listen to more than one episode of a soundcast to get a feel for it...but that depends on how many episodes there are... ah, you know what? I can't imagine you want to hear me go on about my process of selecting clips so I won't right now. I can tell you that I listen to everything submitted to the show when that is done using our Hightail link.

As for this show, we'd really appreciate it if you rate and review over on Apple Podcasts if you have the time. It's a terrific way of showing support and it helps spread our show around a bit for which we would be eternally grateful. And, of course, it's what we mean when we gently ask you to please pass the Succotash.