I was going to start off this episode with a ramble – not a rant, but a ramble – about the medium of podcasting based on an epiphany of sorts which I had while thinking about this show. I was going to be about I suddenly realized that podcasting really is its own medium. Some people, in trying to describe it, refer to it as “radio on the internet”.

As much as back when television was introduced, it was referred to by many as “radio with pictures.” And, before that, radio was often referred to as “vaudeville for the ears.” You get the idea. 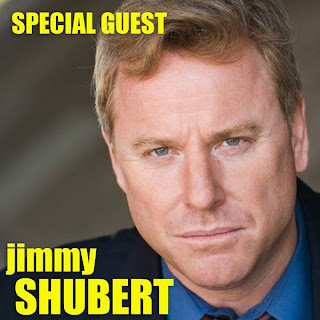 Anyway, before I could put my ramble together, I ended up interviewing this episode’s guest: Comedian, actor AND now podcaster Jimmy Shubert. And we end up discussing that idea in some detail, so I’ll let that go for now.  Jimmy and I talked about a bunch of things about his career and one of the defining periods in his development as a nationally touring headliner was traveling on the road with, and opening for, Sam Kinison.

In addition to being a national headlining comedian, Jimmy has shown up in some movies and TV shows in various guest appearances, including Go, Mr. & Mrs. Smith, The Italian Job, Monk, Two Broke Girls, and a bunch of other projects. He’s recently added podcasting to his resumé and, less than a half dozen episodes ago, he kicked off The Jimmy Shubert Show.

(He's also a good sport. We had Skyped ourselves an interview last week which then crashed and burned on yet another bum hard drive while I was trying to edit it during a business trip cross country. As soon as I called him up, Jimmy didn't even let me get past the second "ahem, you see what happened was…" before he was volunteering to do it again.)

Because of the length of our interview, plus playing Chapter 7 of teh Boganwood podcast mini-series from Australia, we only have time for a couple of podcast clips this show. But it's a full show - including TWO Bursts O' Durst with comedian Will Durst and an end-of-the-show recipe for Irish-style succotash by Chef Shamus, courtesy of Kat Sorens of The Rigid Fist and the Strange Times podcasts.

One more clip we have this episode is from The Paul Mecurio Show, which I also reviewed this week over on Splitsider.com for This Week In Comedy Podcasts. Paul's guest is one of my favorite comics out there: Brian Regan.

For the uninitiated, this weekly feature isn't concerned with the podcasts at the TOP of Stitcher's Top 100 Comedy Podcast list - mostly because they never change much. Instead, we take time out to look at which shows have shown the most significant movement - either way - up or down.

Hosts Dean Haglund and  Phil Leirness have just finished shooting their new movie The Ladykillers and the most recent epi of Chillpak was recorded at the wrap party itself. In this brief clip, they chat with the actor in their cast who is also hosting the party at his home.

Recent guest on OUR show, Paul Mecurio, hosts comedian Brian Regan on HIS show. You can read my review of the show, as mentioned above, over on Splitsider.com. In the clip we have, Paul - who has been an opening act for Brian over the years - gets him talking about his love of coffee and his problem with hotel room numbers. 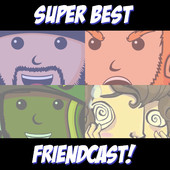 This show just squeaked in at #100 on Stitcher Top 100 Comedy Podcasts this week. As I mention on the show, I'm not sure this qualifies as a comedy podcast per se (but then NPR's Car Talk has been in the Top TEN of the comedy podcasts forever, so who am I to judge?) It is, however, an entertaining show about games - mostly video games - and it's for those who are REALLY into video games.  Matthew tells us about a couple of them and his co-hosts Woolie, Liam, and Patt kick into the chatter.

Congrats to our friend Adam Harris for hitting Episode 200! His consistently solid show's format is most him going one-on-one with comedians from all over. The clip we have for you is a piece of his chat with Tom Wilson, who tends to be recognized most often from his role as Biff in the Back To The Future movies, although his turn as the harassed police captain in this summer's The Heat let audiences see him in a different light. As did his role as Coach Fredricks in the short-lived but cult fave TV show Freaks & Geeks, which is what Adam talks to him about in this clip.

Looking at the page, it doesn't seem like it, but this episode of Succotash is the second longest we've done, clocking in at about an hour and forty minutes. Don't sweat it - it's FREE! (Although you shouldn't feel shy about A) Clicking our Donate button at our homesite, SuccotashShow.com; or B) rating and reviewing us up on iTunes. Or BOTH!) In the meantime, pass the Succotash!