Okay, I’ve been teasing this for a few weeks now but I'm finally going to pop the top on the roadtrip recording I made of Dana Carvey, San Francisco veteran comedian Larry “Bubbles” Brown, and me. The occasion was a pair of theater gigs that Mr. Carvey was headlining — one in Medford, Oregon, the other in Redding, California – and which Mr. Brown was the opening act. Me? I was the chauffeur, documentarian and backstage announcer. 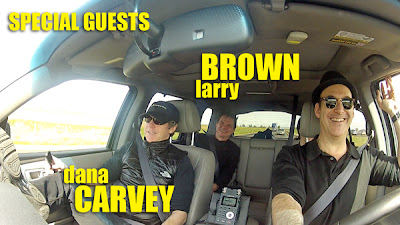 We had two GoPro cameras rigged up in the car, courtesy of a trio of documentary filmmakers who are doing a project about comedy in San Francisco (in which Larry plays a prominent part) and we also had a digital recorder running so that we might grab some on-the-road chatter for Succotash. 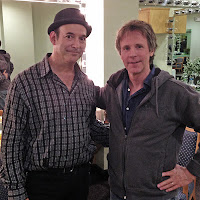 Thanks to my technical knowhow, we almost failed to captured both video and audio during the trip but we did manage to capture enough to fill out this latest epi. (Apologies to listeners: Longtime Succotashians know that I like to nitpick when it comes to crappy audio quality in podcasts and - due to road noise and the other hazards of recording in a vehicle moving in excess of 70 mph, we ended up with a less-than-optimal podcast-quality recording. But I've cleaned it up as much as I can so, hopefully, you'll enjoy the drive along with us.)

If you heard the last episode you know we had some HUGE swings in the numbers all up and down the Stitcher Top 100 Comedy Podcast List. In some cases but 100, 200 or more places. After seeing this week's figures, I think something must have gone screwy at Stitcher HQ, but they are closer to what counts as normal on this list this week.

For the first time since Succotash began, our booth announce Bill Heywatt wasn't available to record our sponsor's commercial (he says he's on "vacation", I prefer the term "rehab refresher".) So I give it my best shot this episode when it comes to pitching Henderson's latest, their Sleepover Slacks.

Our Ambassador to the Middle Will Durst sounds off this episode about two things that go together like salt and pepper, namely politicians and scandals. 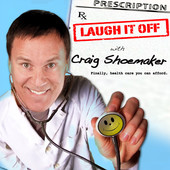 The Craig Shoemaker Show
Back in Epi29 my special guest was comedian Craig Shoemaker, from an interview we had when he played San Francisco last summer. So high time we pay a quick visit to the Love Master via a clip from The Craig Shoemaker Show, which is also known as Laugh It Off, kind of a healing-through-laughter philosophy. He’s joined by comedian Sarah Sweet and sidekick/barista Joel Geist. Craig talks about how he likes to record his encounters whenever he gets pulled over by the police for traffic stops — and we get to hear one. 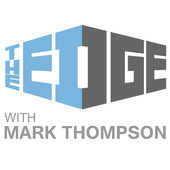 The Edge with Mark Thompson
This week my combing through podcasts turned up an old acquaintance: Mark Thompson. He's been doing TV weather, news and voiceover mostly out of LA for years but we first me when he would guest host show with my improv group in San Francisco at The Punchline in the 80's. About a dozen episodes or so ago, Mark flipped the switch on The Edge podcast. Heather Ankeny is his co-pilot and in the most recent epi, his guest was the very funny Caprice Crane, who is a TV writer and an author. Her parents were pretty well-known folks. Dad was broadcaster Les Crane and - in this clip - Caprice tells what it was like having Tina Louise (Gilligan's Island's Ginger) as her mom. (The Edge is also the podcast I'm reviewing over on Splitsider.com for This Week In Comedy Podcasts!) 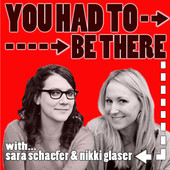 You Had To Be There
Splitsider.com has their own comedy podcast network and You Had To Be There, hosted by Sara Schaefer & Nikki Glaser, is part of the roster. (Don't even get me started why Succotash isn't part of their lineup...) Recently they had Jim and Jeannie Gaffigan guesting — yes, we heard the Gaffigans LAST episode when I featured a clip from The Todd Barry Show — but this time they're talking about fame and Taylor Swift. Or, rather, Taylor Swift’s fame.

So that's all we have in the way of clips this week. Hopefully, you'll be amused by the over 45 minutes of rambling conversation on the road with Dana Carvey and Larry Brown.

Please take two seconds to jump up on iTunes, click to the Podcast section and both rate and review Succotash. You can give us a Thumbs Up on Stitcher. And if anyone asks what podcasts you're listening to these days, be sure to pass the Succotash!