The next episode of Succotash, The Comedy Podcast Podcast, is here. Late. AGAIN. 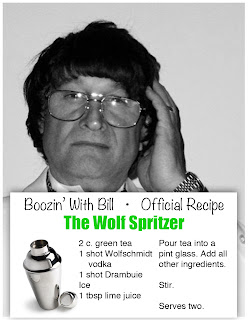 I keep trying to crank this sucker out every week but that darned Life keeps getting in the way.  As much as I enjoy producing Succotash, my landlord has told me time and time again that – no, he will not take plugs on the show in exchange for the rent. Nor will the grocery store trade with me for food. And I'm sure not going to get gas with my podcast.

So, for the time being anyway, this show remains something I get to as often as I can and I will keep TRYING to drop a show a week, but it’s challenging. (I appreciate those of you who can hang with the erratic release schedule!)

In addition to beau coup clips this week, I belly back up to the bar with our booth announcer Bill Heywatt for what proves to be an explosive episode. In the midst of preparing his "Wolf Spritzer" concoction, Bill underestimated the power the his SodaStream machine could unleash and he proceeded to drench the both of us with Gunpowder Green Tea. 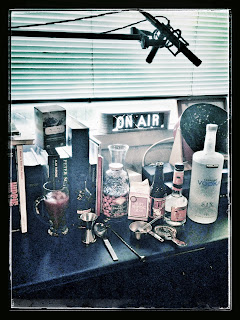 But we weathered that storm and soldiered on to finish making up Bill's tribute to his favorite newsman, Wolf Blitzer. If you can't see the recipe here, you'll find it on our homesite at http://SuccotashShow.com. And I'll post it up on the Succotash Facebook page as well.

It sure was great to finally be back with Bill at the studio wet bar, and I took a picture of the setup so that the listening audience might admire his posh layout.

Friends-of-Succotash Dean Haglund and Phil Leirness are celebrating six years of hosting the Chillpak Hollywood Hour podcast. Their show was a chief inspiration for me deciding to launch Succotash two years ago so join me in wishing them the best as they continue to produce high quality, interesting and entertaining episodes. I've made them an honorary sponsor for this episode of Succotash and - in keeping with our months-old tradition of mentioning each other's programs in one way or another, I've got a slice from their most recent Epi311, where Phil kicks off the show by mentioning us in the process of apologizing for not being able to mention us. It's beautiful.

I'm happy to report that that podcast feature with the longest title in the world just got its own jingle, courtesy of the Studio P Jingle Singers! There was a lot of action in Stitcher's Top 100 Comedy Podcasts this past week - massive swings both up and down for a bunch of different shows. (This is SO much more exciting than charting the Top 10 shows, isn't it?)

This week comedian Will Durst goes after the "Yellow bellied coards" in the Senate who mucked up the sensible shot (no pun intended) we had at some intelligent gun control. 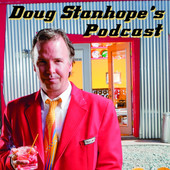 The Doug Stanhope Podcast
Doug Stanhope is, for my money, of the funniest "real voiced" comics around. He's guested on a number of podcasts but now he's looking to get conversational on his terms. His podcast just kicked off and we've clipped the second edition, where he chats with pal GooseKirk, who explains what went down at the airport in South America just before he got busted and put away in a Brazilian prison for 5 years. (Not coincidentally, I reviewed this episode last week for This Week In Comedy Podcasts on Splitsider.com)

The Todd Barry Podcast
The second newcomer to podcast hosting that we have on tap this week is the very funny Todd Barry. He IS the personification of wry and it's a real pleasure to get to hear him on the podwaves in his own format. For his first outing, he interview fellow comedian and voiceover guy Tom Shillue from New York. They took a detour while talking about working on the road and you get the sense that these two guys REALLY like their coffee… (I'm reviewing the episode for Splitsider THIS week, so check it out!)

Clutch & Wiggle
Rob & Craig - the guys over at CWERadio.com – replay Succotash every time we manage to squeeze another episode out. So we love it when we get a chance to return the favor a bit. Rob sent this in along with this note: “Here is a clip from our recent show. We came up with a new 'game' where you have to come up with a description of this 'sex act' from the mind of Craig Wiggle - this one was called 'Snakes on a Crane'."

Special thanks to listener Tyson Saner for sending in clips from two of his favorite podcasts: 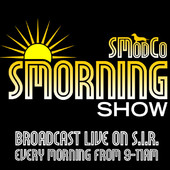 The Breaks
This clip is from James Franco Jr.'s own program which is hip-hop and news through a comedy filter... or vice versa. James is known by the nickname/title "Jammaster James" although his fans call him DJ James or Djammaster because of his twitter handle @Djammaster. His guest is Comedian Nestor Rodriguez who shares a childhood memory.

Complete Sentences with Ty & Rocky K
So Rocky K called into the Succotash Hotline, then sent in a promo for his show, THEN sent in an actual clip when I emailed him and told him that clips were preferable. This clip is called "Late Night Stories".

StarEffers
Joe over at Radio Fubar sent along a clip from his show StarEffers – it’s all about pop culture, celebrity gossip and more.

That's our show for Epi57. Next time out I'll be featuring a bit of a rambling chat/interview/John Wayne extravaganza, recorded on the road with Dana Carvey and SF comedian Larry "Bubbles" Brown.