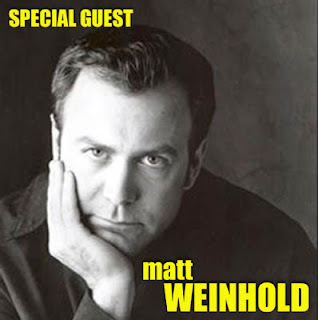 This week's a mostly clipless week on Succotash. Stockpiling a bunch for the next episode while I devote the majority of Epi53 to my interview with Matt Weinhold. In addition to his long history as a standup comedian, Matt's be involved in writing and helping to produce a lot of television, web, and film projects as well. Included in that dossier: Writer and voice actor for MTV’s The Super Adventure Team; a writer and co-creator with Greg Proops on The Amazing Colossal Show, appeared in the Star Trek documentary Trekkies, written on tons of other TV including BBC America’s The Nerdist, Style Network’s The Dish, and used to be part of the Fashion Police commentary team for US magazine. You can also still get Matt's comedy CD, Dead Funny, by clicking on the link or on iTunes.

In the realm of podcasting, Matt's been podguesting with the likes of Jackie Kashian on Dork Forest and more frequently on The Dana Gould Hour. But he's in the process of turning what was a YouTube experiment into a full on video/audio podcast and we talk (and play) a bit from his Monster Party concept during our interview.

(Fair notice: We recorded the interview at the Coffee Fix in Studio City, CA. While it's a great place for coffee, the cavernous space, loud background music, blenders, grinders, and clanking utensils made for a listener-challenging environment. We've done what we could to pull out some of the room noise but there are portions of the interview that are somewhat hard to hear. Apologies. Welcome to the world of guerrilla podcasting...)

Rather than do a straight-ahead Top 10 countdown from this week's Stitcher's Top 100 Comedy Podcasts — because the 'casts at the top don't seem to change very much - this week we introduce "The 10 Most Active in the Stitcher Top 100 Comedy Podcast List"! It was based on an idea I got from Ed Wallick, host of the Don't Quit Your Daycast podcast. I've ranked ten shows by their relative position on the chart, but also included the number of spaces they moved in the past week. Or points they go - I can't really figure out that that up or down number is supposed to represent considering that one of the shows — SModcast — moved DOWN 101 points on a chart that only has 100 spaces.

Last week I played a clip from the Chillpak Hollywood Hour, one of the first podcasts I ever listened to, and I mentioned that hosts Phil Leirness and Dean Haglund had been doing the show for over 4 years. My bad. It’s been SIX years. Not only that, I incorrectly gave their website. It’s ChillpakHollywood.com (As I did mentioned last show, they DO still have a MySpace page, though.) I’m told that my voicemail apology to them will be a special guest on the next episode of CHH. Just got word that pre-production is underway on The Lady Killers, a new feature film by Phil and Dean. If you get a chance, check out their enthralling documentary The Truth Is Out There.

I'm a guest on the latest Seven Days A Geek episode of Podcasting 101. The Angry Ginger and I chat it up about how simple it really is to kick off a show, how to figure out what a podcast should be about and a bunch of other inside baseball chatter. Click on the show link and check it out for some good (mostly) clean conversation about the blood n' guts of podcasting.

Friend-of-Succotash Chet Haase has sent along a nifty little ditty in the wake of the changing of the Pope called Papal Reign, a parody to Prince's Purple Rain. It's timely and funny and you'll find it at the tail end of Epi53. Thanks, Chet!

Our Ambassador to the Middle Will Durst offers a litany of things that go awry as we move into Upper Middle age in this week's Burst O' Durst.

I also get into our TweetSack a bit this week, including some real honest-to-God emails. I read off a long list of Twitter handles from folks who have retweeted, favorited and otherwise been kind to Succotash this past week. It's really appreciated and makes doing the show worthwhile knowing that people are enjoying the experience and sharing that enjoyment with others. Or, as I like to think about it, passing the Succotash!