Saluton and Ahoy-hoy Soundcast Enthusiasts and Accidental Listeners Everywhere! I am your host, Tyson Saner...it is my real name...and we can talk about nominative determinism another time. As for now... 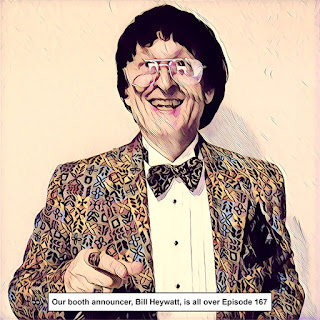 We've also got a single Burst O' Durst from political comedian and social commentator Will Durst for you this show and of course, what would an episode of Succotash be without a classic Hendersons' Pants commercial? That question answers itself…

And please stay tuned until the end for a BONUS snippet, won't you?

Tuesdays with Stories!
Our first soundcast featured is one of several at Stand Up NY Labs and it is called Tuesdays With Stories! The show first appeared on iTunes, September 3rd of 2013, and the description reads: A fun weekly podcast hosted by NYC comedians Joe List and Mark Normand who have an endless amount of funny stories. Every week they spin a few hilarious yarns, sometimes with comedian friends. This clip is from recent Epi238 from last month and is entitled "Snazzy Cock", featuring a snippet of a longer conversation about being a comedian and the ebb, flow and type of attention after your Netflix special airs.

Ding Dong Chomp
Recently announced on Nooner, the long-running weekly live-on-Tuesdays soundcast on Kevin Smith's "Smodcast Internet Radio", Ding Dong Chomp has spun-off and is hosted by @MartyYu and @StephenKrueger.  Marty is one of the 2 original Nooner hosts of and Stephen has been a on-again off-again co-host of the show for years. Marty and Stephen are foodies, and have created this show to accommodate their need to talk about food and eating. Our clip is from their 2nd episode which dropped last month.

The Van Buren Family Roadcast
This soundcast — or "roadcast" — got my attention through Twitter recently. (Which, BTW, is a great way to get my attention as far as the show is concerned, over at @SuccotashShow. According to their description on iTunes: "The Van Buren Family Roadcast is a musico-comedy-goodtimes podcast unlike any other. Brought to you by Boston's favorite funny funk family, the Van Burens, the VBFRC is audio entertainment for the 22nd century. Join PBear, Mr. Pizza King, Keyjay McGee, Max and their wicked talented extended family on a romp through your ears, past your heart, and straight on to your funny bone." I have to admit that it's a pretty great description.  I've listened to most of the episodes by now and I was a bit spoiled for choices when attempting to select a suitable moment of this that also fit between the 3-5 minute limit that our clips usually attempt to abide by.

Hannibal Buress: Handsome Rambler
Here's a show that was recommended to me by the @Laughable app. Hannibal Buress: Handsome Rambler is from the Earwolf network (whose soundcasts have been oft clipped for this soundcast) and the snippet we have for you is from Epi51which hit last month. It features guest Neal Brennan, con-creator of The Chappelle Show and he has his own super cool comedy show Three Mics on Netflix. In addition to comedian host Hannibal Buress, Tony Trimm is in the studio as well, to whom guest Brennan directed the question that kicks off our clips.

Strange Times
Frequent listeners of Succotash will be aware of The Strange Times Show by now, with co-hosts Davian Dent, Kat Sorens, and Samantha Pett. In fact there was a clip of their soundcast in our "The Unfinal Episode", Epi 163 where Executive Producer Marc Hershon announced his (potentially temporary) retirement as host, introduced yours truly as the new host ,and said "Thank You" to a BUNCH of soundcasts and soundcasters who had been very supportive over the years. (I'm embarrassed to say that I did not know that our booth announcer, Bill Heywatt, had begun doing his very own The Bill Heywatt Show as a segment on Strange Times. And when I say I'm sorry it's because I imagine I had been told this by someone, somewhere — and had forgotten about it.  My memory isn't what it used to be, my apologies.)  Anyway, here's a clip that includes an episode of The Bill Heywatt Show from episode 244 published on December 9th, 2017 titled "Ghost Fuckers", along with special guest Dana Lucas.

Prinze and The Wolf
The first five episodes of the Prinze and The Wolf soundcast dropped on iTunes on January 11th, 2017 and they are still going strong with over 70 episodes as of this month. As told to us by the show description on iTunes: "Prinze and The Wolf is a podcast with Freddie Prinze Jr. and comedian Josh Wolf that will cover everything from parenting, to MMA, to pop culture, to gaming. to cooking...you name it! With Freddie's wealth of experiences/stories and Josh's quick sense of humor, no topic is taboo and there are definitely no "safe spaces" on this show." I've decided to clip Epi 1, appropriately entitled "Episode 1...The Beginning".

High Content
Recently I was a guest on High Content Podcast, a show I clipped in Epi 164, my first episode as host of Succotash. Host Iraj Lopez was kind enough to have me on for a conversation in his episode #33 which dropped just last week. It's just a wee clip for you but don't worry, my answer was pretty long.  I appreciate being asked to be on his show a great deal.

Well, that about does it. Another colorful melange of veggies and bacon for your ears. I do spend a good amount of time looking for and finding soundcasts to clip, from a selection of what is now easily half a million different show available.

Okay, that might be stretching it a bit but the actual number as of April, 2018, has got to be over 100,000. I'm not sure how many of those are comedy soundcasts — I have no way even attempting to have these numbers for you today — but if you do hear this voice from the past in your present, you'll likely know the facts, and that ultimately timing IS everything.

And if, by any chance, one or more of these soundcasts I've featured piques your interest enough that you become a regular listener of it, and if I were to theoretically find out about that somehow, perhaps through social media rather than telepathy or osmosis, then I could rest easily knowing my job had been done, at the very least, successfully. Because now you understand what it is to wield the power to (please) Pass The Succotash!