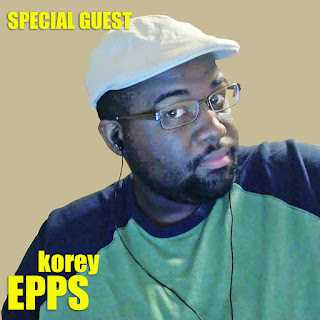 It is in fact I, Tyson Saner, your humble host for the duration of this Chats edition of Succotash. My guest is podcaster (or soundcaster, rather…), singer, and actor Korey Epps.

Korey was the host of The Evil Teddy Bear Podcast for many years and over a hundred episodes. I was even a guest on his show in Epi67, entitled "Fights Like Tyson", back in 2013. (Click the link in this epi's blog entry on on our http://SuccotashShow.com homesite if you want to hear what I sounded like as a Boy Podcaster…)

The ETBP went defunct last year but recently Korey has come back on the soundcasting scene with the appropriately titled The Korey Epps Show. We'll be discussing that and other things so stay tuned, won't you? (Spoiler Alert: We experienced technical problems toward the end of our chat so had to cut our conversation a bit short more suddenly than intended…)

We've got our Burst o' Durst from political comedian and social commentator Will Durst in which In which our intrepid correspondent goes slightly mad and babbles on and on about the shady, depraved and transgressive administration.

I'd like to bring YOUR attention to a special event that Mr. Durst brought to MY attention. It's called "Comedy Celebration Day". They had their first one back in 1981 and this year - in 2018 for you time travelers - , it's being held on September 16th from Noon to 5pm. It features 40 comics, it's in San Fransisco in Golden Gate Park's newly named Robin Williams Meadow... and it's free to attend. They recently reached their gofundme goal but you can still see the promo for the event (and continue to donate!) at https://www.gofundme.com/comedy-day-2018

I've also got another selection of TrumPoetry from our almost-brand-new sponsor TrumPoetry.com...

Thank you for spending your time with us for the hour or so which this installment ate up. I appreciate it a great deal. If you like what you're hearing I'd like to invite you to tell people about us here at Succotash, The Comedy Soundcast Soundcast. It doesn't cost you more than a moment or two of your time to leap over to our page in the Apple Podcasts section, search for Succotash Show, and give us a 5-star rating and a tasty little review. Sharing is, after all, caring...and it's the most direct way to honor our request that you please Pass The Succotash!