Saluton estas mi, Tyson Saner. Welcome to this week's episode of Succotash Shut-In: The Soundcast Stimulus Package. (In case you missed Epi223, it dropped a week ago and was hosted by our other host, Marc Hershon. In that episode he featured clips from a quartet of comedy soundcasts where the hosts talk about movies, specifically How Did This Get Made?, Dad’s Movie Night, The Flop House, and "Who Shot Ya?. You can get it from our homesite - SuccotashShow.com - or Apple Podcasts, Google Podcasts, Spotifu, Stitcher, or anywhere fine (and not so fine) soundcasts are to be found.) 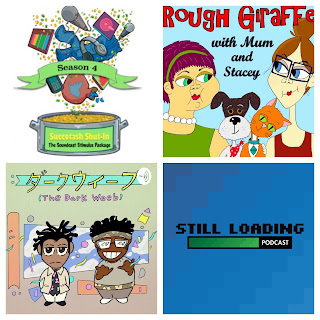 But this is show 224 and I've got clips from Rough Giraffe, Still Loading, and The Dark Weeb. I've also got a reading from our 100% fake sponsor with the 100% real website, TrumPoetry.com, as well as a spot from Henderson's Pants, our O.G. fake sponsor, with a classic commercial for Henderson's Passive Aggressive Pantaloons.

By the way, this episode represents a personal milestone as it is the 100th episode that I gathered clips for in one capacity or another since April of 2013, Epi 57 "Boozin' with Bill (Again). Of course this was after the show debuted waaaaaay back in March of 2011 as Succotash, The Comedy Podcast Podcast with full-time host and show creator, the aformentioned Marc Hershon. I'd like to take this little bit here to thank him again for taking me on as an associate producer now almost a decade ago. I appreciate all the positive feedback and acceptance I have recieved over the years. I'm not great at expressing myself. So I will just repeat, Thank You!

Rough Giraffe
Join hosts Mum and Stacey for a comedy trivia podcast full of weird news, unusual facts, and a wonky cat! Our featured clip is from an episode from this past August, and to celebrate Kipper's 15th birthday, Mum and Stacey are talking all about …birthdays!

Still Loading
This show is focused around video games, video game culture and video game history. The clip we've snipped is from August 23, 2020, and is about NINJAS! For the Summer of PS2, this 'sode focuses on Shinobi by Sega. Kade Call from the Gaming Memories podcast joins Josh Covel to talk about the first 3D entry in the classic Sega series. They talk all about the game and even find time to reminisce on the 3 ninjas movies. (I chose this clip because I was a fan of the arcade game "Shinobi" back when I was significantly younger and, although I do not remember playing "Shinobi" for the PS2, I do appreciate the enthusiasm with which the conversation was had…also, NINJAS!

The Dark Weeb
Comedians and weeb-adjacent homies Cody Ziglar & Brodie Reed kick back each week and cover a favorite nerdy pop-culture interest; anime, manga, video games, and everything in between.
This week Zig & Brodie are joined by apex nerd, writer & comedian Heather Anne Campbell, and super fan Alexis Qusarano to their love for the mind-bending anime classic, Neon Genesis Evangelion! (I chose this clip because although I have not experienced the subject matter firsthand, I have seen many of the classics such as "Akira", "Fist of the North Star", "Wicked City", "Ghost in the Shell", "Ninja Scroll" and "Princess Mononoke", just to name a few and I AM a fan of Anime in general so… I get the enthusiasm… also, I've been meaning to see "Neon Genesis Evangelion" one of these days…)

Yes again, it's another end, my friends. I hope we entertained. I have been listening to soundcasts more and more lately because that's what needs to be done for this sort of show. I'd say that I listen to less soundcasts than I used to but I'm not really sure about that. It's not significantly less… and I only bring it up because I was thinking about how I find shows to listen to and feature on Succotash Shut-In and there are a fair few that I heard of because I'm listening to soundcasts and I hear them mentioned on those soundcasts ,or being advertised somewhere during whatever I happen to be listening to at the time. I also find shows on Twitter. I'm at @revt23 personally and the show is @SuccotashShow in case you happen to be on there… why not say "hi"?

We appreciate it when you tell others about us as well…we try to make ourselves easy to find, easy to digest. Thank you for eating us. Thank you for listening. Wear a mask to protect others AND yourself because you may be fine and get thru COVID-19 unscathed but not everyone does. You could spread it to someone who dies from it. That may not legally be murder…but it's starting to feel more and more like it should be at the very least thought of as such if not enforced in the same way. That's just how I feel because I care about you. So, remember to get out and VOTE and remember to Please…Pass The Succotash.