Saluton, estas mi Tyson Saner. I'll be your host for the duration of this week's edition of Succotash Shut-In: The Soundcast Stimulus Package,  also called SSI The SSP … no, I'm kidding, NOBODY calls it that. … but they could.
Come to think of it, when the show was called Succotash, The Comedy Soundcast Soundcast, people could have called it S The CSS …I really don't know if anyone ever did before my having written this…but then, there's a lot of things I don't know and I'm still breathing as of this recording… so I must have figured THAT out at some point. It stands to reason… and it sits down to shut up. 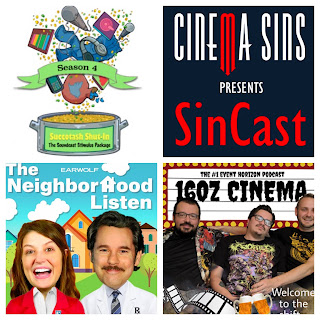 Anyway, unless you're listening to this audio by accident you know that this is a show that features clips of other people's podcasts - or soundcasts as we like to call them here at Succotash - and this episode is no exception to that. I've got 3 clips for you, one from each of the soundcasts I'll be mentioning in the next couple breaths. I've got clips from: Sincast, 16oz Cinema, and The Neighborhood Listen. I've also got the best in fake advertising from our fake sponsors Henderson's Pants and TrumPoetry.com in store for you so I hope you enjoy yourselves as I take you on this listening journey to the far, or perhaps very near, reaches of the internet which is completely relative to you and the type of soundcast listening you might quote-normally-unquote find yourself partaking in.
Let's begin. Cho-la-la-mo!
CLIPS
16oz Cinema
Drink pints. Talk Pictures. 16oz Cinema (Angus, T.J. and Mike) chats about movies, drinks craft beer, then each episode all movies discussed are related to Paul W.S. Anderson's classic Event Horizon! The clip we're featuring is from June of this year and features Angus and T.J. kicking off the debut of their new Sub-Cult Series, talking about the should-be-cult movie Trancers! (After much searching I've not been able to locate any social media for Angus, T.J. or Mike. That is to say, the show is on Twitter and Instagram…but the hosts are very likely not. I'll update that information if possible…)
SinCast
From the co-creators of CinemaSins: Chris Atkinson and Jeremy Scott, who provide your favorite movie and culture nitpicking, are joined by Barrett Share from Music Video Sins, and other guests to discuss, analyze, and ridicule the world of entertainment. Our clip is from just this month - July, 2020 - and although the show is pretty much dedicated to Hamilton, with it being released on Disney+, the SinCast crew decided to delve into some other adaptations of theater to screen and the clip a discussion around the film adaptation of the David Mamet play Glengarry Glen Ross.

The Neighborhood Listen
Join Burnt Millipede (Paul F. Tompkins) and Joan Pedestrian (Nicole Parker) as they explore their hometown of Dignity Falls via posts from a certain neighborhood social networking app and interview the town's most intriguing residents.  On the very first episode of The Neighborhood Listen, local CVS pharmacist / host Burnt Millipede (Paul F. Tompkins) and local realtor / host Joan Pedestrian (Nicole Parker) discuss a lost green parrot, a mystery whistler, and all things Doug (Brett Morris). Plus, we meet Vanity (Maria Blasucci), a suspicious "carrot red-haired" woman who was caught snooping on potted plants. Our featured clip involves the portion of the program having to do with the titular "Parrots" … or at least one peculiar parrot in particular.
And here we are at the end, together yet nearly about to separate due to the nature of how shows work - in that they are finite and must…uh … end. And here we are.
Next week, Marc Hershon has the hosting duties for you and more content to be experienced will be presented for your listening pleasure were you to stream or download us again. We are grateful for you as a listener for using your precious time to spend a bit of it with us. I hope you enjoyed something in what you heard. Perhaps you will even be inspired to start your own soundcast…and perhaps I'll find it and clip it. It's more likely to become a reality than you may ever know… and some of you already do.
By the way, if you like watching people play video games in YouTube videos I do that too. I just recently posted a game video for a game called "Everything" which is really more of a meditative experience than a game AND features narration by Alan Watts… I'd like more people to experience the game but sometimes it's hard for a person to imagine themselves partaking in that sort of activity… so I mention it to increase awareness. …and, if you enjoyed our program, why not recommend it to others?
We'd really appreciate it a great deal for it is what we mean when we leave you with the show's closing sentiment, the gentle reminder and honest plea for you to please pass the Succotash
— Tyson Saner