Welcome to Epi203 of Succotash Shut-In, the Soundcast Stimulus Package. I’m Marc Hershon, switch-off co-host with Tyson Saner, each of us taking every other week. That way we can bring you fresh Succotash every week as we do our best to ride out the pandemic lockdown together. 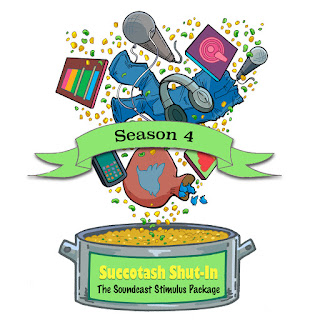 The aim of this season of the show is to bring you short snippets of a variety of comedy soundcasts – a kind of Whitman’s Sampler of funny – so you can then track the ones down that you like and grab their full shows. To make it even easier for your soundcast safari you can easily get to each show by clicking on it's title as it appears below.

I’ve decided to go with a kind of TV-themed rack of soundcasts to play for you durinig the half-hour we have together. We have Office Ladies; Fake Doctors, Real Friends; The Darkest Timeline, and Bonanas for Bonanza.

This episode of Succotash is sponsored by Henderson’s Pants new Foggy Bottom Britches and also Trumpoetry.com.

Office Ladies
If you were a fan of TV's The Office – particularly the American version of Ricky Gervais’ genius mockumentary brainchild – or have thought about jumping in to fill up those long days and nights of sheltering in place, Office Ladies is the perfect “watch-along” soundcast. It’s hosted by Jenna Fischer and Angela Kinsey, who played Pam Beesley and Angela Martin on the show. And it’s an episode-by-episode, one-for-one breakdown, of the entire run of the TV show, which was on from 2005 to 2013 on NBC.

One of the most recent shows tracked the season finale episode of season two, entitled “Casino Night”, which had been written by Steve Carell, who not just played but embodied Michael Scott, the boss. And they had a special guest for this episode – John Krasinski, who played Jim Halpert, who ends up marrying Pam in the show. In this clip, John and Jenna reminisce about when they auditioned together for The Office, which is when they first met.

BTW — If you haven’t caught John’s weekly YouTube SGN videos, which stands for Some Good News, you’re missing out on some great spirit-lifting news about what people are doing during the COVID-19 crisis to help others. Check out a recent installment…

Fake Doctors, Real Friends
Another episode-by-episode breakdown of a beloved TV sitcom is Fake Doctors, Real Friends. Hosted by Zack Braff and Donald Faison, who were two of the series’ regulars on Scrubs, which ran from 2001 to 2010 – most of it on NBC, but the last two seasons aired on ABC. If you somehow missed this show the first time around — it did debut almost 20 years ago — here’s a summary from IMDB.com: “Set in the fictional Sacred Heart hospital in California, John 'J.D.' Dorian makes his way through the overwhelming world of medicine, with the help of his best friend, his fellow rookie doctors, and the arrogant, but brilliant attending physician he views as his mentor.”
So Zach played J.D. and Donald his best friend, Christopher Turk. There are a lot of funny fantasy sequences in the show, which are mostly in J.D.’s brain. This clip is from a recent episode where series creator Bill Lawrence jumps in as their guest to talk about the show.

The Darkest Timeline
So our next clip, from The Darkest Timeline, is also TV-show-related but it’s not a “rewatch show”. The title comes from an episode of NBC’s Community, created by Dan Harmon (who has a couple of soundcasts out there, including Harmontown – a show so popular it spawned its own documentary) and where the plot of it was a look at the show’s characters in a comically grim, alternate reality. Two of the show’s stars – Joel McHale and Ken Jeong – became best friends and feuding enemies. They often take any opportunity if being interviewed alone to throw shade at the other. Not unlike the ongoing rivalry between Hugh Jackman and Ryan Reynolds, albeit with smaller paychecks.
Anyway, they’re currently Zooming together to bring this soundcast to us and it’s really more of a weekly update on the COVID-19 situation and the outlook for the future. Ken has been a doctor for many years, long before he became an actor, and Joel has been a comedian, long before he became an actor. And they’ve found a quirky mix in this show of being informative while trying to keep things as light as they can given the gravity of the current health situation. 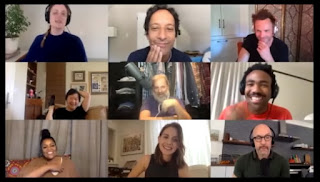 This clip, however, is all for fun, as it’s from their Episode 9 which dropped recently and featured a Zoom call with pretty much the entire cast minus Chevy Chase, and including show creator Dan Harmon. For the record, that was Alison Brie, Danny Pudi, Dan Harmon, Donald Glover, Yvette Nicole Brown, Gillian Jacobs, and Jim Rash plus, of course, Joel and Ken. You won’t get that firepower every week but The Darkest Timeline is a a good listen and you can keep up on what’s happening, viruswise.

Bonanas for Bonanza
For our last clip we’re going to take a hard left away from the sitcoms that feature prominently in the three preceding segments. Although this last one is, for all intents and purposes, a “rewatch” show. I’m not even sure how to explain Bonanas for Bonanza without taking up this whole show but let’s try. First of all, I’m not mispronouncing the title – it IS BO-nanas for Bonanza. Not sure why.
As for the rest: Once upon a time, Andy Daly and Matt Gourley did a couple of seasons of Andy Daly’s Podcast Pilot Project over on Earwolf. (We clipped one of those pilots, Shut Up and Have Fun with Danny Mahoney, back in Epi85 of Succotash in 2014.) One of Andy’s characters from that group of pilot episodes was Dalton Wilcox, who billed himself as “The Poet Laureate of the West.” He also had a habit of hunting down and killing monsters such as werewolves and vampires.
Cut to present day Soundcastland where Any and Matt have created a rewatch show around Bonanza, a very popular TV Western that ran for 15 years and went off the air in 1973. 1973. Take that in for a minute. You can find a lot of it on YouTube and some other streaming services. Well, hilariously, with Andy playing Dalton Wilcox and Matt coming in as country music legend Mutt Taylor, along with comedian Maria Bamford along for the ride as Bonanza superfan Amy Sleeverson, this trio is attempting to get their audience through all 431 episodes of this long-defunct TV show. They often will have a guest riding shotgun and our clip, Episode 4, “The Piute War”, feature the hardest-working guest in soundcasting: Paul F. Tompkins, appearing as Dalton’s adversary, Russell Shine.

That’s going to do ‘er for Epi203 of Succotash Shut-In, the Soundcast Stimulus Package. Episode 204 will be coming up next week with my co-host-at-a-distance Tyson Saner. And coming up in the next few weeks from my side of the soundcast will likely be an interview with returning guest, improv and standup comedian extraordinaire Greg Proops, and a special Down Under edition of the show featuring clips from Australian-based soundcasts and co-hosted with old friend of Succotash Jason McNamara, aka “Jabs”, from Canberra, Australia.

But that’s in the future. For now, take care of yourself, maintain social distance, wear a mask when you go out – I don’t care what local governments are saying, just use your common sense, and if you want to help cheer someone up, please pass them the Succotash!