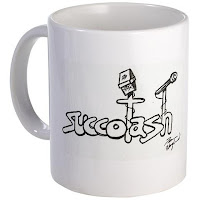 Welcome to our first full-fledged episode of the New Year. We've got nine podcast clips for you, plus a lovely novelty tune, Undead Love Song, by friend-of-Succotash John Anealio. (Off his album Laser Robot Zombie Love, available at http://JohnAnealio.com.) And yet the show comes up a little short, timewise, this week. Maybe it's because we're missing our usual Burst O' Durst with political punwit Will Durst. (Durst's on vacay but will be back next epi...)

Anyway, because the show runs a little shorter than usual, you might actually catch the little "extra" I began tagging onto the very end of the show starting with the previous episode. It's an idea I shamelessly stole from our friend Jabs of The DHead Factor — I started taking the audio track from videos on YouTube that feature recipes for succotash. This week's is a doozy: Daphne Oz and Tom Arnold make "Summerin' Succotash" on ABC's The Chew. Enjoy!

Epi46 also marks the start of our Top 10 Comedy Podcast countdown, as tabulated weekly by Stitcher Smart Radio. It turns out that comedy podcasts up there at the top of the heap don't move around a whole lot, so unless you guys want to basically have me read the following list every week, it will behoove us all to get over to Stitcher and start listening and rating our favorites. Here's how this week looks:

That's about all I have to share with you guys. Maybe if someone wrote in once in a while with questions or beefs or something, we'd get a little going here. Instead, here's who we have ready to serve up for your listening pleasure in this epi:

Dazed & Convicted
As (belatedly) promised, our lead-off clippage this show is from Monica Hamburg's new Dazed & Convicted podcast, with her equally new co-host, Bill Allman. Longtime Succotashians know Monica from S & M Rants, but she's rebooted the concept and their new show focuses on stories from the news featuring what Monica refers to as “criminal fucktards”. Nice. 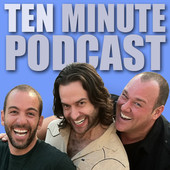 Ten Minute Podcast
Looking for a quick blast from Podcast Land? Listen no further than the Ten Minute Podcast. It’s three funny guys – Will Sasso, Bryan Callen (both from MAD TV) and Chris D’Elia (from Whitney), and they're happy just to be shootin’ the shit and being funny.

Mohr Stories
Mohr Stories is the flagship podcast at Jay Mohr’s podcast network, FakeMustache.com. I’ve been wanting to clip his podcast for a while now and then, when I heard Bryan Callen in the Ten Minute Podcast we are also featuring this epi, I thought what a great segue!

Royal & Doodall
They're back! You can’t escape the Pod Mafia — even though I recently played something from these two "made men" – Tommy Royal and Angus Doodall – I just HAD to play this next clip because it features…me. It’s from the R&D Christmas Panto show, where they had various members of the Pod Mafia from around the world record lines for this holiday audio play, then they stitched the whole thing together like a Christmas goose. I am truly humbled and honored that Royal and Doodall asked me to join in their reindeer games. 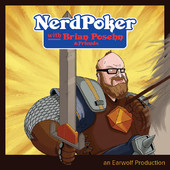 Nerd Poker
Comedian Brian Posehn, who you may know from the Sarah Silverman Show, just started hosting a podcast over on the Earwolf network called Nerd Poker. Which is a euphemism for Dungeons & Dragons or D&D as it is often called. The show is Brian and a handful of funny friends, including Blaine Capatch, Ken Daly, Gerry Duggan, and Sarah Guzzardo, who have created strange and wonderful characters that go on adventures overlorded by their Dungeon Master Scott Robison. Because all these folks are comics and writers and actors, it’s all pretty funny and even if you haven’t been into D&D for over 30 years (oops, did I say that?) you’ll still probably enjoy it. (I recently reviewed Nerd Poker over on Splitsider.com - you can catch it at http://hersh.co/TWICP010313)

The Zane Lamprey Show
Comedian, actor and International Drinking Ambassador Zane Lamprey hosts a show that used to be called Drinking Made Easy but now goes by the name The Zane Lamprey Show. Succotashians were turned onto Zane when we had THAT Chris Gore on as our co-host a month or so ago. Our featured clip is of Zane, his posse Steve McKenna, Fun Josh and Mel, along with guest, three-time Playboy Playmate Jessica Hall. 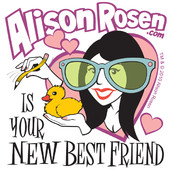 Allison Rosen Is Your New Best Friend
Although she’s pretty well-known as Adam Carolla’s newsy sidekick on his podcast, The Adam Carolla Show, Alison Rosen’s been hosting her own show since 2009. She’s very engaging, involves her listeners in the show with games and thanks largely to her clout from being part of Carolla Digital (formerly ACE Broadcasting), she gets some awesome guests. Here’s a clip from her recent two-part visit with Dave Atell.

Bertcast
Bert Kreisher is a comedian with a podcast – imagine that! – and a forthcoming documentary that’s being done about him. We clip his Epi5 where he interviewed the two filmmakers who have been following him around, Jeff Johnson and Jeff Hinman. In the segment we have, they talk about what happened when they went out after hours with fellow comic Hannibal Buress. 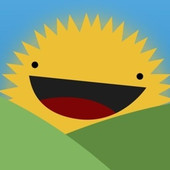 Cox & Crendor Show
The official blurb calls this show “The highest quality non-content 30-minute morning show on the internet in podcast form” and it seem to be holding that spot fairly well. These guys are out of Los Angeles and, if they don’t smoke pot, Jesse Cox and Eric “Crendor” Hraab really should have to explain why they laugh so much during their show.

There's our deal. Epi46 in one neat, tidy bundle. Next week we'll visit with David Owen, one of the founders of the renowned San Francisco Sketchfest, about to kick off it's 12th year. Until then, keep it real. And pass the Succotash!