I was delighted to be able to slice out a chunk of time with Ben Blacker, half of the the brain trust (along with producing/writing partner Ben Acker) behind The Thrilling Adventure Hour. For those unfamiliar with TAH, it's a mega-popular once-a-month stage show in Hollywood, Los Angeles, California, America, which then gets sliced and diced into a weekly podcast as well. We've featured several clips on Succotash and I've reviewed it favorably in This Week In Comedy Podcasts over on Splitsider.com. 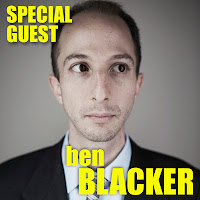 Ben's an affable chap who talks about the origins of some of the show's most popular segments — Beyond Belief, Sparks Nevada, Marshal on Mars, The Adventures of Captain Laserbeam and more – and we drop clips from the segments as we mention them. Since I've only been able to enjoy TAH via podcast, I can't wait for the opportunity to catch the stage show one of these days during an upcoming trip to Los Angeles.

Because of the length of the interview (and the fact we're playing about a half dozen clips from TAH in the course of the show), there wasn't room for any other podcasts during Epi37. We did squeeze in our regular feature, Burst O' Durst with political comedian Will Durst. And remember that Will's ebook, Elect To Laugh, is out and available just by clicking the linked title (and $5.95.) 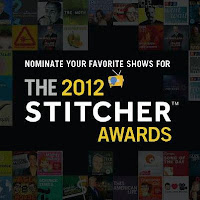 If you're a podcast fan, NOW is an ideal time to show it. Nominations are being accepted for both the 8th Annual Podcast Awards AND the Stitcher Smart Radio podcast awards, too! I urge you to nominate your favorite comedy podcast (and your favorite p'cast from other  genres, too!) If you're kind enough to throw a nod our way, I'd suggest putting Succotash in the Entertainment category rather than cast us into the crowded Comedy contingent (where there are MUCH funnier shows, pound for pound.)

I hope you enjoy Epi37 — The Thrilling Adventure Hour is a kickass show and a lot of fun, and I enjoy doing this sort of "tribute-on-the-fly" for it. Look for more theme shows like this in the future from Succotash but don't worry: We remain your Comedy Podcast Podcast and will be presenting a ton more clips from podcast everywhere!

Live Succotash Alert: The Los Angeles Podcast Festival is this weekend — October 12-14 — in Santa Monica, CA, and I'll be there. Hope to run into a lot of my podcaster friends and acquaintances there. And I'll be interviewing as many folks as I can while I'm in town. Look for me in the Succotash t-shirt. I'll also be tweeting my location through @SuccotashShow live as the fest progresses.