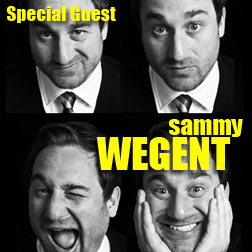 Ringing in with Episode 35, Succotash is beginning to feel like a show (to me, anyway), even if our format keeps sliding around a bit. Maybe that's the nature of this beast. This epi is a real hybrid - half clips, half interview - and it's also the "lots of background noise" episode. I put it together while vacationing in Honolulu and my tracks as festooned with the lapping surf of the Pacific Ocean right outside the window. Coupled with the coffee house environment that special guest Sammy Wegent and I have going on in the background of our interview, I have no right to take anyone down for audio roughage in their clips - this episode, anyway.

Sammy is the brains behind Everybody's A Comedian, the web series that is currently "airing" its sixth and final episode on YouTube this week. He's a fascinating guy who I first met when we were brought together a few years ago to put together an improv training program at the San Francisco Comedy College. Actor, stand-up, improvisor, writer...Sammy is a multi-threat talent and he pulled everything together to create the first season of EAC.

The series is roughly based on his own life in San Francisco as a struggling stand-up comedian. Featuring Samy in the lead role, the episodes also show off a number of comedy faces familiar to San Francisco audiences - Kevin Avery, Bob Brindley, Joe Tobin, Allison Page, Yuri Baranovsky, Sal Calanni...and yours truly. (Check out Episode 2...)

In our interview, Sammy gets into the background that led him down the paths of acting and comedy, as well as how he found his way to San Francisco. Once he hit the City By The Bay, the seeds for EAC began planting themselves and he talk about how they coalesced into the semi-fictional series that concludes this week.

As far as this episode's clips go, here's the rundown:

Here's The Thing
Alec Baldwin kicked off his own podcast last year and, as you might imagine, he can probably pretty much have whomever he wants as a guest. I’m actually reviewing this episode, in which Alec talks to SNL and Portlandia’s Fred Armisen, on This Week In Comedy Podcasts over on Splitsider.com this week, so be sure to check that out. In our clip, Armisen talks about the transition point he went through from drummer to comedian.

Get Into Character
Blasting out of Grand Rapids and hosted by Tommy and Chubby, I don’t know too much more about these guys, but they’re 22 episodes in and taking this podcast thing seriously. And if Angus Doodle, from the Royal & Doodle podcast likes ‘em, that’s good enough for me!

Soda Pop Talk
Soda Pop Talk with Dan and Nolan just started popping up on my radar the past few months when I started seeing their tweets. They sent in the clip and this blurb about their show: We are just two normal guys with much to say about nothing...and anything. Sometimes we go over the line only to realize that there's still further to go. Soda Pop Talk is a show that is about variety - not just soda pop. Able to span current topics to drunken antics of family to UFOs to fecal matter to meaning of life philosophical debates...okay, not so much the latter, but you get the idea.

The Half Scoop
Here's a "new to me" podcast, this time from Down Under, joining Australian podcasts The DHead Factor and The Rigid Fist as those being featuring on Succotash. Featuring co-hosts Bryce McKeon, Corben Mitchell, and Stephen Denham, each week they sit down and talk about anything and everything including time travel, films and Batman.

Way Too Hip
LyonHart and Labrat go live every Monday from 7 to 9 PM, East Coast time, then you can catch WTH as a podcast the rest of the week. We haven't checked in with them for a while, so the clip they sent us is a glimpse in a recent screwed-up evening in the life of the hapless Labrat.

Burst O' Durst
We sign off as per usual with comedian Will Durst reporting in, this episode in the aftermath of the Democratic National Convention. Don't forget to follow Will on Twitter @WillDurst!

Last item this week: I wanted to mention a fond and regretful adieu to The Gee & Jay Show as well as The Pissed Off Man Show, both out Belfast, Ireland, and both mostly out of the mind of Gavin Maxwell. He and Jay have been plugging along in the largely thankless podcast world for a couple of years and they've had enough.. Their shows were breaths of fresh Irish air in a world of soundalike "shootin' the shit" style shows but, for now, they've shut down operations. Gavin sounds off on his blog about the reasons why he's tossing in the towel, so click on the link and give it a read. (Good luck, boys! Come on back anytime!)

UPDATE: Happened to be up late tonight and saw Gavin's tweet that there was an additional Pissed Off Man show that suddenly posted on SoundCloud...it seems if he can find the will (aka money), he'll find a way to keep going. Check it out.

There's Epi35 in a nutshell for you. If you'd like to write me, that's at Marc@SuccotashShow.com and, if you're a comedy podcaster and want to submit a clip, we like 3 to 5 minute ones in MP3 format, which can be sent along to clips@SuccotashShow.com.