Ah. Back to an all-clip episode of Succotash, your Comedy Podcast Podcast. We have a cornucopia of clippage for this time around. Mostly new faces or, rather, voices, but some old faves, too. Purposely not clipping any of the "big" shows this time around. I’m talking the shows that get most of the attention from the media and, as a result, keep cropping up at the top of the heap on iTunes, Stitcher, etc.

There are a lot of comedy podcasts out there that get short shrift, little notice or just plain ignored. Succotash has been making an effort to beat the bushes for the harder to find podcasts and, if YOU’RE a comedy podcaster and want to get a clip on Succotash, just email us a 3 to 5 minute MP3 snippet from your show! Send it to clips@SuccotashShow.com.

I wanted to share a video with you from Frank Cronin, our Irish correspondent. He's finished his summer foray in America and is back on the Emerald Isle - Galway City, to be exact - where he's looking to finish up a college degree. His international travels the past few years have left him a little bereft of ready cash, however, and for the short haul, he's looking for a place near the university to camp until he gets his rent money together. Take a look...

All right - let's get to the rundown for the latest episode. Here's what's on tap...

I Am Idiot
We’ve featured I Am Idiot with Ben, Howard and Keith from Britain before. This clip - featuring a prank phone call from Howard where he's been challenged to mention the title to every Mel Gibson movie in the course of the conversation - is longer than we usually play. But this one was pretty entertaining so I made an exception.

Moment Of Clarity
Lee Camp is a comedian with an activist bent. He's very active in the Occupy movement. And his podcast, Moment Of Clarity, has 158 episodes or so, meaning he’s got this thing down. Interviews, guest, rants. It’s a pretty heady and often revolutionary blend he offers.

Sweet Feathery Jesus
SFJ is a cross-country, trans-Atlantic affair, with hosts Belasco, Dr. P and Booze in Texas, North Carolina and England, respectively. Some listeners seem to think that Belasco and I sound alike. Not sure about that, but the trio of them are interesting guys, sitting around on the internet, talking.

Spoodcast
The teaser for Spoodcast on their homesite reads: “Two Americans, One Canadian, and one American living in Canada walk into a bar. There’s no punchline. That’s the Spoodcast.” One of the co-hosts (and executive producer) is Matthew Dean. Another dude is named Joel. No idea who the other fellows are - more info on the website, guys!

Matthew Dean (see above) also produces and stars in Dr. Matt. This unlicensed head shrinker bills himself as “half Dr. Phil, half Stephen colbert and half Dalai Lama." Ever since our favorite Dr. Feelgood Bob Ducca and his Affirmation Nation went silent back in February, podcasting has needed a self-help guru. Could Dr. Matt be the answer? Maybe so…

We played a clip from Combat Radio two episodes ago when Phil Leirness was our guest co-host. I asked Sargent-At-Arms Ethan Dettenmaier for another little taste of the show and he shot us over a short blast with Captain Cool Billy Dee Williams.

The Brit & The American
Thomas Moore and Alba Lewis over at The Brit and The American were so tickled that we played their clip that they recorded a special little thank you in the course of their podcast. I was tickled about that that I'm playing it in this episode.

From Out Of Nowhere (aka FOON)
We play a first clip from the From Out Of Nowhere podcast — or FOONcast — with hosts Rob Kern and Eric Furniss. It's a music and comedy-oriented show, with lots of guests, such as Marc Maron and Marshall Crenshaw. This clip features the guys’ visit with Blue Oyster Cult singer/guitarist Eric Bloom, and they ask him about the infamous SNL “more cowbell” sketch. 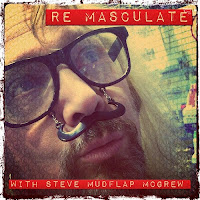 Comedian Steve "Mudflap" McGrew has been featured on Comedy Central and other TV venues. Now he’s fired up a podcast called Remasculate, featuring various guests including his wife. In this sample, Steve comments on a news article about the Top 10 Hated jobs in America.

We close out this edition in the usual fashion, with a visit by raging moderate political comedian Will Durst, this time giving us his take on the recently-wrapped Republican National Convention.