We're back. It seems I'm saying that every 'sode now for one reason or another. This time we got delayed and had some technical difficulties (which are addressed by producer/engineer Joe Paulino during the show.) Epi14 has finally dropped, as they say, and it's a doozy. So much show that we allowed it to run seven whole minutes over our usual one-hour running time!

One of the main missions of Succotash is to expose you, our Gentle Listeners, to all manner of comedy podcastery, especially some of those shows you might not have even heard about, let along listened to yet. And I can proudly say that this epi does just that. There are a couple of clips from some previously visited shows but mostly you're going to hear some new stuff that hasn't popped up on everyone's radar yet. (And if it's a show you already now then congrats - you beat us to it!)

We've got a couple of Studio P visits this show. One is with the owner of Studio P, the aforementioned Joe Paulino. He pops in so I can make him plug his new CD, a delightful relaxing musical blend entitled Inhale Slowly. If you like to take a break and ratchet the madness down a few notches once in a while, this collection of meditation-inspired tracks by Joe and collaborator Tim White will get you there. Click on the link to visit Inhale Slowly and pick up a copy. We also have another Boozin' With Bill segment.

More intense than our previous encounters, Studio P has installed a functional wet bar and Bill forces your host to imbibe his latest concoction, the "Popper Stopper". (I've popped the formula down there toward the bottom of the blog.)

Before I get to the lineup, let me remind you that you can catch my blatherings in a more focused form each week: as a contributing reviewer to This Week In Comedy Podcasts over on Splitsider.com. Jesse Fox and a handful of other opinionators each pick a comedy podcast that has caught our fancy that week and we write them up.

Finally, Succotash has gone listener-supported! (Okay, so we haven't ever had a real sponsor yet...) Look over there in the right-hand column on the blog page and you'll see the shiny new Donate button. Just click away and through the miracles of PayPal, you'll be able to toss a few digital dollars into our virtual hat if you'd like to help us defay the costs of producing this fine program. We'd be much obliged and will mention your name in an upcoming show as one of our benefactors.

Ok! Enough rambling. Here's who's up in Epi14 of Succotash, the Comedy Podcast Podcast. Just click on the show titles to visit their homesites... 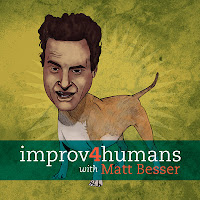 New in the land of podcasts, Matt Besser of the UCB Theater in Los Angeles hosts this foray into bringing some core elements of longform improv comedy to the audio arena. He's joined in this clip by Chad Carter and Sean Conroy.

What a fun discovery! Two lads from Hertforshire, England — Scratcher and Roberts – sit 'round and snipe at issues of the day. Guest Luke McFayden in this clip, where a rebuttal letter is read in response to a notice of traffic violation received by one of the boys.

This is our second time around with host Cameron Buchholtz, whose interviewing skills get better and better with each podcast. Here he's got pretty much a podcast exclusive with guest comedian Brody Stevens, who pulls back the curtain on his recent Twitter-perceived breakdown.

Also a second visit, this time from the Northwest's Brett Hamill in the form of a commercial for one of his show's mythological sponsors. (Hey! We have one of those, too!)

Here's a new-to-Succotash podcast. Not sure who these folks are or where they're from and I take 'em to task for it a little bit following their clip. I like to be able to give podcasters their due – most of us are slogging this out without a lot of recognition – but when your p'cast's homesite doesn't have much info on you (AND you sent us the clip yourself!), there's only so much we can say. 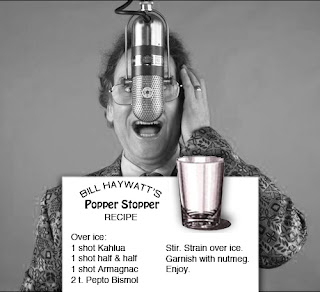 Hosted by Parker Arizona and Jason Frisbee (great names!), PPR is one of those free-wheeling discussion-style podcasts where folks generally shoot the shit about anything and everything. In this clip, they're talking movies and get into something I can appreciate - what I call the "pussification" of classic monsters in recent films.

Their title stands for File Under Horrible and the hosts - Bill and Jim - toss around a number of topics that get their goats and their dander up. Even their goat's dander, occasionally. Out of Chicago, these guys channel their creativity in this clip into a sketch about Michael Jackson based recent news that surfaced regarding one of his brothers. (I don't mean to pick on these guys in particular but I hold the FUHcast up as an example of a show that could be made better simply by ramping up the audio quality - that goes for a lot of the programs out there. Nothing personal, guys - I appreciate what you're doing!)

I pretty much completely mangle my mention of the four hosts' names - Andrew Jupin, Stephen Sajdak, Erik Szyszka and Chris Cabin (well, three out of four) - so apologies, gents. I love their take in this clip about the idea for a GOOD Star Wars-based TV series: The story of Lando Calrissian in a The Wire-style telling of the Cloud City story. (I'm not a squeamish guy, language-wise, and we do carry an Explicit warning on the podcast but I don't believe these fellows could cram more gratuitous uses of the word "fuck" into this clip...)

As a kind of memorial to podcaster Adam Spiegelman's recently removed tonsils, we roll out three related offerings next...

Adam hosts his "Cult Movie Podcast" each episode and this clip is from a recent show featuring Crystal Angel, a rare creature, indeed - she's an avowed fan of Adam Sandler's Jack And Jill movie, which has not been kindly received. Guest Judith Benezra helps to gentle roast her.

Spiegleman produces what's being billed as "The Game Show To Go", hosted by comedian Jonathan Corbett. I think this clip comes from a show that was produced in a Mini Cooper (slightly creepy) and features two contestants who are trying to guess which celebrity supplied one of a trio of tweets. The prize is five bucks. (I see a future on GSN...) 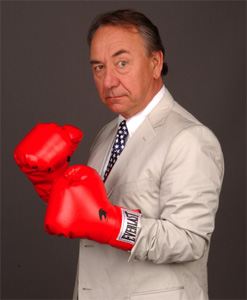 This is the first time Succotash features a possible podcast. Mike Spiegleman, Adam's brother and a San Francisco-based comic, has a blog entitled Luggage Tuesdays and his sibling is urging him to turn his writings into a podcast. Here's one of the test segments so we can all get a taste of what that might be like.

We round out Epi14 with a visit from our fave political wag Will Durst, who shines his wry light on the Herman Cain misfire. (If you're in the San Francisco Bay Area, don't miss Will's Big Fat Year End Kiss Off Comedy Show XVII -it's all over the place the last week of the year so Google it (click the title to link to the Yelp listing for the show on New Year's Eve in Alameda.)