Saluton. Estas mi, Tyson Saner. I'll be your host for this Final Episode of Season 3 of Succotash, the Comedy Soundcast Soundcast. If you've not been listening to the previous episodes then you might be unaware that this is also the final episode before our hiatus…but more on that later. This also happens to be our 200th episode (hold for applause) and what a full episode I've got for you this time. 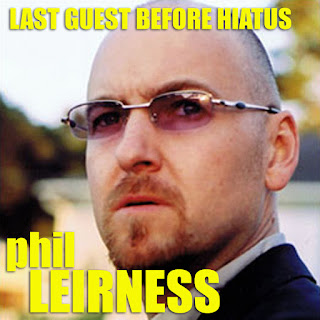 It's a Succotash Chats episode and I'm joined by producer, director, violence prevention specialist, friend of Succotash and one-half of the team that hosts Chillpak Hollyood Hour: Phil Leirness. Mr. Leirness, along with Dean Haglund of TV's The X-Files and The Lone Gunman, has been creating and publishing episodes of CHH since 2007. They've always been supportive of this show, which itself has been around for your listening pleasure since 2011.

Chillpak Hollywood Hour, to me at least, has always seemed like a big brother of sorts to Succotash…not in any insidious way, of course. There used to be a lot more crossover between Succotash and Chillpak in those early days.

In addition to my chat with Mr. Leirness I've received some special audio sent in by a few soundcaster supporters of Succotash whose identities I will keep a surprise for now. There's at least one surprise I don't even want to tease at the beginning here…suffice to say it's a very pleasant surprise for listeners and this host alike. All will become clear eventually. And this hiatus-adjacent Epi200 is brought to you by none other than our longtime, non-paying sponsor: Henderson's Pants and their new Bicentennial Pants.

Incidentally, it't not to late to purch some merch - the Succotashery remains open during our hiatus, giving you the chance to pick up some gear that's sure to become collectors' items one of these days. Just click over to https://www.cafepress.com/succotashshow to see our selection.

Finally, I'll mention that after my discussion with Phil I've got a bonus chat featuring none other than the original host and current executive producer of Succotash, Marc Hershon, who discusses the past and possible futures of the program with me and sends us off in style…or something like that. No, I like that: In style!

Before we begin I wanted to share some news with you regarding our most frequent contributor and friend of the show, raging moderate Will Durst. As regular listeners of this soundcast know, Mr. Durst suffered a stroke in October of last year. I've been holding on to the remaining Bursts o' Durst I received and spreading them out over time so as to have at least one in every episode until the hiatus. Because, somehow it might not feel like an episode of Succotash, The Comedy Soundcast Soundcast, without a Burst o' Durst.

I really don't know what else to add at this point. It's been a fun ride over these last nine years since the show began…and eight years of my involvement. I feel like going on too much at this point might be gratuitous.

Mostly I'd just like to thank everyone here at Succotash for making the show what it has been throughout the years…Scott Carvey's theme music, Bill Heywatt's mellifluous announcing, Henderson's Pants and TrumPoetry.com's fake sponsorship, all the soundcasters who had interesting ideas that they took the time to record and publish so that they might one day be listened to by Succotash, The Comedy Soundcast Soundcast, and anyone else who might might be in search of something to listen to…and, of course, Marc Hershon's creation of the show in the first place.

Mostly, I'd like to thank YOU, the listener, for taking the time to make Succotash part of your listening life…even if it you're only listening to this episode…well, of course you are, you wouldn't be able to hear this otherwise.

So, for Succotash, the Comedy Soundcast Soundcast, I've been Tyson Saner saying farewell and gxis poste, and reminding you that we've got at least 200 episodes in the archive now so if you wouldn't mind terribly, I'd like very much to remind you to Please, Pass The Succotash.