Hey, look. Or listen, rather. It’s me, Marc Hershon, your host and carpet remnant for Epi155 of Succotash, the Comedy Soundcast Soundcast. I had a delightful bunch of soundcast clips lined up but then got the chance to chat with one of my more popular soundcast contemporaries. So I decided to go with another Succotash Chats installment and hold the clips until next time. 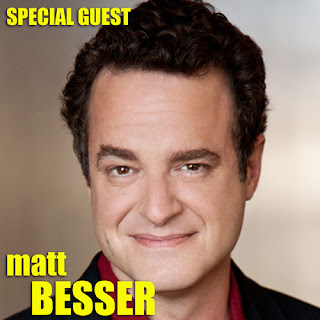 Our special guest this episode is Matt Besser, host of the improv4humans soundcast and one of the founding members of the Upright Citizens Brigade, which has become one of the guiding lights for improvisational comedy in the US.

I wanted to talk with Matt because of a special improvised narrative trilogy that he’s been doing recently amongst the regular improv4humans episodes, a three-part story entitled The Mopes.  Along the way we chatted about how he first got up to speed on doing improv in Chicago, what it was like to hold down “normal” jobs before getting in the business of show, and some future improv-based plans for TV that he hopes will come about.

Bookending that conversation is a double shot of our Burst O’ Durst segment with political comedian and social commentator Will Durst. And this episode of Succotash is brought to you by our friends at Henderson’s Pants and their oh-so-comfy Chillin' Churidars.

We recently kicked off a Patreon page for this show, in case you were wondering how you could help support Succotash. Only problem is, no one has subscribed yet. So i don't even know if the damn thing is hooked up. Do us a favor and check it out, then let us know by subscribing for a measly dollar a show. (There's also still the Amazon banner at the top of our http://SuccotashShow.com homesite and our dusty old Donate button there, too.)

If you'd like to help us out in spirit only, please go to our listing on iTunes to rate and review Succotash. Those 5-star ratings help push us up into the light.

Starting with this month's episode 6, I am lending my voice as the announcer for The Los Angeles Breakfast Club ON THE AIR soundcast, hosted by Phil Leirness. Check that ou for a fascinating look at a fascinating LA institution that's almost 100 years old.

Next episode I should be returning with a Succotash Clips show BUT there are a couple of more interviews on deck, so those may take precedence. Nonetheless, if you're a comedy soundcaster and would like us to feature a clip from your show, you can get a 3-5 minute MP3 clip directly to us via our upload link, at http://hightail.com/u/Succotash.