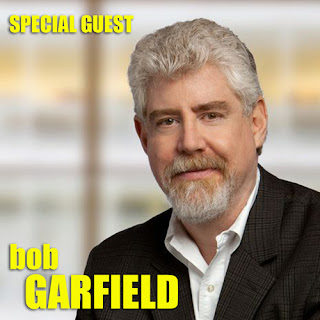 Yes, it’s me – Marc Hershon – your host and ripstop nylon for Epi152 of Succotash, the Comedy Soundcast Soundcast. This is an installment of Succotash Chats, rather than Clips, and our special guest this episode is Bob Garfield, host of not only NPR’s Peabody-award winning show On The Media, a correspondent for All Things Considered, plus a journalist and writer for such publications as The New York Times, Playboy, Atlantic, and Sports Illustrated, but he’s also hosting a new soundcast on Audible called The Genius Dialogues.

It’s a really interesting series where Bob chats with people who have received MacArthur Foundation "genius grants." (If you’re unfamiliar, the John D. And Catherine T. MacArthur Foundation is a fascinating philanthropic organization — click the link and check it out!)

Much like being able to binge watch a show on Netflix, all 12 episodes of the first season of The Genius Dialogues, is available for binge listening via either download or streaming from the Audible app. You may not recognize most of these names but the MacArthur Foundation has recognized them all as being geniuses: Chemist Phil Baran, RadioLab founder Radiolab Founder Jad Abumrad, DuoLingo creator Luis von Ahn, extreme action choreographer Elizabeth Streb, New Yorker Investigative Journalist Sarah Stillman, famed debunker The Amazing Randi, Growing Power Founder Will Allen, MIT Inventor Amy B. Smith, artist Jorge Pardo, Origami Microscope Creator Manu Prakash, physicist Carl Haber, and creator of HBO's The Wire, David Simon.

We have not one, not two but THREE of our Burst O' Durst segments with political comedian and social commentator Will Durst! (The third one is a BONUS segment and appears in the closing credits of the show.) We take a peek into the Tweetsack to check out some emails and tweets. And this epi is brought to you by Henderson's Pants newest offering, their Foggy Bottom Britches.

If you've got a comedy podcast that you'd like us to feature, you can upload a 3-5 minute an audio clip (MP3 or WAV formats are good, but we can pretty much use anything you've got) directly to us. Click over to http://hightail.com/u/Succotash and upload it right into our Tweetsack!

I, of course, have a deep appreciation for each and every pair of ears that gets filled with Succotash. But that appreciation runs even deep for those who willfully pass the Succotash along to friends, family, and co-workers. And deeper still to those who rtake the time to rate and review the show on iTunes, Stitcher, SoundCloud or wherever they listen. But the deepest appreciation of all goes to those thoughtful folks who can afford to help me out with defraying the production costs for this show by clicking the Donate button over on SuccotashShow.com or who click the Amazon banner there or who buy themselves a mug or a t-shirt from our Succotashery.

That's going to do it for now. Coming up next will be another Succotash Clips episode, #153, and I'll see you then.