Yes, this is Marc Hershon, your host and non-fat dried milk for Epi 128 of Succotash, the Comedy Podcast Podcast. And this is the very first episode of the show to be recorded in front of a LIVE audience! It all went down on Friday, February 5th, at the Comedy Lab, the tiny showroom next door to the world famous Improvisation in West Hollywood, California.

Our announcer, Bill Heywatt, and I made the trek from NorCal to SoCal, arriving in time to set up and welcome show guests Dana Carvey, his two sons Dex Carvey and Tom Carvey, and Wayne Federman. (We also had a Burst O' Durst, but Will Durst was making his appearance via recorded medium…) 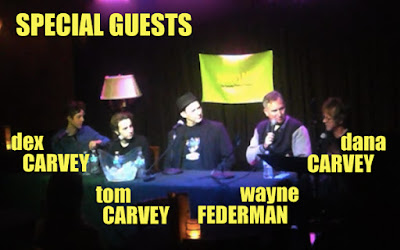 Friend-of-Succotash Rick Overton was slated to be on the show as well, but had to bail as he got cast in an episode of HBO's Veep literally the night before and had to be on set shooting at the same time we were doing the podcast.

I want to thank the Sideshow Network's Shawn Marek and his crew for inviting us in and making the whole thing come together. As well as the folks who showed up to watch — 6 PM on a Friday night in LA is a sketchy time to pull off a show and we did it. (I will not be thanking the LA Parking Authority, which slapped me with a $63 ticket because the show ran 10 minutes too late for me to feed my meter…)

Suffice it to say, between airfare, the rental car, and the parking tickets, and the dinner I bought some of our guests afterward, this was the most expensive episode of Succotash to date. Which seems a dandy time to remind you that there are several ways to help support the show:

• Click our handy Donate button on our homepage, at http://SuccotashShow.com

• Click on the Amazon banner at the top of http://SuccotashShow.com and we get a slice off anything that you might happen to purchase during that shopping trip

• Click on the link to The Succotashery at http://SuccotashShow.com, purch some merch, and festoon yourself with our logo

If money's an issue, you can give us moral support by clicking over to iTunes to rate and review us, Like our page on Facebook, Follow @SuccotashShow on Twitter, "heart" us on SoundCloud and, whenever you get the chance, whether you're with friends, family, co-workers, or total strangers, please remember to pass the Succotash!