Succotash is your Comedy Podcast Podcast and, as such, we feel it's our duty to keep stretching the definition of "comedy podcast" a bit more when we can. Succotash hit the road to interview this week's special guest, Kelly Carlin, who was kind enough to invite me into her home for a discussion about comedy, podcasts, and her late father, comedy legend George Carlin. 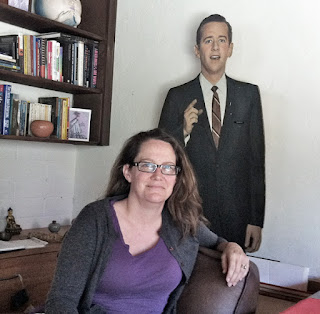 She's a smart, lively, funny, and fascinating personality, who hosts Waking From The American Dream, an internet radio show and podcast. Interestingly, we learn that she wasn't involved in the world of comedy very much while her dad was alive but, immediately following his passing, she found herself greeted by well-wishers of high status in the comedy community, who were anxious to make the only child of a comedy figurehead know that she was welcome to become part of this great extended family.

It's an interesting conversation, one which I've broken up over the hour-long episode and interspersed with a handful of clips from some comedy podcasts we've not featured yet:

As I mention in the show this week, Affirmation Nation is one of my new favorite p'casts. The installments are short and can be found daily over on Earwolf.com. Featuring Bob Ducca, there's a great lampooning of "feel good-ness" going on in each tasty bite of this offering. (Apologies to Bob, Seth Morris, and the Earwolf folks - I blew leaving the link info in the show this time! I'll mention it in Epi10. In the meantime...)
www.Earwolf.com and iTunes

Funny concept and follow-thru for a show by a quintet of guys. They watch movie trailers and, from those alone, attempt to predict the film's ratings on the Rotten Tomatoes site. Talk about meta! In this clip, the guys examine recent release Fright Night.
www.CinematicMethod.com and iTunes

Friend of Succotash Dave Nelson and his p'cast are back on the show via this clip featuring a taste of his interview with actor/comedian TJ Miller. Dave's a touchstone for podcast and comedy happenings in the Midwest, and we're glad he asked if we'd revisit his program.
www.dvnelson.podvean.com and iTunes

An "open forum where a 'nothing is sacred' approach is taken" is how the Mad Ranters' website talks about their podcast. Angus and his crew take everything to task and leave no stone unturned along the way. We're just giving you a taste: Angus ranting solo about drivers in the middle lane.
www.TheMadRanters.com and iTunes

So we're a little short on the clip count this week to better accommodate our interview with Ms. Carlin. But you'll also catch another Burst O' Durst with regular contributor and political comedian extraordinaire Will Durst (www.WillDurst.com and @WillDurst on Twitter), plus we dip into the Tweet Sack and have another new ad from the folks at Henderson's Pants.

Lastly, we've received zero calls on the new Succotash Hotline at (818) 921-7212, which leads me to believe everyone's incredibly happy with what we're doing, nobody's listening, or you all wish that it was toll-free. Regardless, if you're listening to the show and could do us the great honor of going up to iTunes to rate it ANd review it, we'll be your bestest friend ever.

Hope you enjoy this week's serving and that you'll do your best to pass the Succotash!