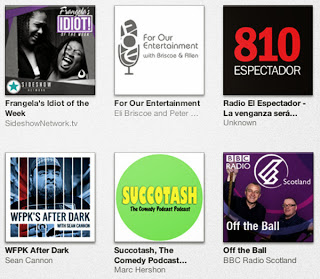 Welcome to EPISODE SEVENTY of Succotash, the Comedy Podcast Podcast. 70!!! Seems like only yesterday I was asking myself "How do I get my voice to come out of that sound thingee?" I estimate that, in these first 70 episodes, that we have played over 630 podcast clips. Listenership continues to grow. And we have consistently been showing up on iTunes' "What's Hot" section as well as being recently featured on Stitcher.

<— Here's a screen shot of our logo floating amongst other podcast friends (and strangers) on last week's "What's Hot" page in iTunes' podcast section.

I'm getting ready to take this show on the road next week for the 2nd Annual Los Angeles Podcast Festival. I got my shipment of Succotash buttons – they’re like pins for your clothes but WAY cooler because they hang on with this magnet backed thingee. I'm going to give those away at our table in the Podcast Lab at the PodFest, so look for me. I’ve even got a couple of big green Succotash banners to hang up so you can find me easier. You can get your tickets for online at http://LAPodFest.com. I’ll have my mics set up and will interview any comedy podcasters who stop by! 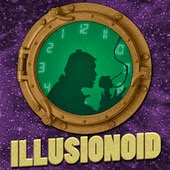 Last week I had the honor and pleasure of meeting, hanging out with, and watch Paul Bates, Lee Smart, and Nug Nahrgang – the cast of podcasting’s Illusionoid – when they were in town for the San Francisco Improv Festival. They did a fantastic job and I’m going to be featuring an interview with them AND the show they recorded live at the Festival on an upcoming episode of Succotash. You can actually hear that episode now – it dropped yesterday – called The Asteroid Juggler! Get up to iTunes, Stitcher or their homesite at http://Illusionoid.com. There’s even a little pre-show chat with ME on the episode!

Our Ambassador to the Middle, political comedian Will Durst was enjoying a well-deserved week off following San Francisco's annual Comedy Day. So there's no Burst O' Durst commentarythis episode. He'll be back next time. In lieu of Mr. Durst's appearance, I'm featuring a funny little ditty called Questions by friend-of-Succotash Chet Haase.

You see that banner up there? The one near the top of our website? That can whisk you magically off to the Amazon website where you can buy pretty much anything you want. (Except, as Larry Miller is wont to say on his This Week With Larry Miller podcast, "a REAL Amazon!") The only difference by going there from here instead of right to there from…somewhere else…is that Succotash receives a kickback for showing you the way to go. So help us out for helping you out, won't you?

Normally I don't even touch the Top Ten shows on Stitcher's Top 100 Comedy Podcasts because there's very little movement up there. Maron, Rogan, Carolla…y'know, the usual suspects. (Oh, and still very mysteriously, Car Talk. ) But this week Bill Maher managed to muscle his way in there, so good on him! Here's how the whole list shook out for this week…

As for OUR Stitcher rank, we are once again on the move! Consistency IS key in this podcast game, don’t let anyone fool you. Miss a week and your ranking sinks like a stone. Last week we were at #6721 but THIS week Succotash jumps up 2,182 place to end up at number 4539! As you can see above, Aisha Tyler’s Girl On Guy leapt back into the Top 100 this week, up 48 places, with the kick-off of her third season. (I still don’t know what constitutes a season of podcasts, by the way. It seems pretty arbitrary from show to show. Hell, at Succotash we’re still in our first season and we’re 70 shows and 2 and a half years in!) Aisha welcomes Jack Osbourne to her show. Jack’s the son of Ozzy Osbourne and he talks some about dealing with the reality of that experience. 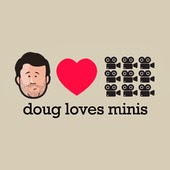 I wanted to pull a slice from this show which is one of my regular "listens" and an episode he had last week really have me laughing hard. (Which must look weird if anyone is seeing me, out on a wilderness trail at 5:30 in the morning, running full speed in the dark and laughing like a maniac…) He had first-time guest Nick Offerman, from Parks & Rec, and returning guests Jon Hamm and filmmaker “Werner Herzog”, which is in quotes because he’s portrayed by Paul F. Tompkins. In this episode, Herzog is really on his game, too. (Don't forget to check out Doug's newest offering, Doug Loves Minis - which are some of the shorter shows now under one label.)

All We Know
The All We Know clip was grabbed for us by Tyson Saner, our Honorary Associate Producer (he's got three of 'em in this epi - thanks, TS!) It’s with Benny and Rafi Fine, AKA The Fine Brothers and is described (on their Tumblr page) as "A sometimes ignorant, occasionally uninformed, irresponsible news podcast." The content is largely driven by audience suggestions through Twitter and Facebook.  Tyson tells me that All We Know isn't a weekly or even bi-monthly podcast lately but that could be because The Fine Brothers also produce weekly content for at least TWO YouTube channels.

No Pressure To Be Funny 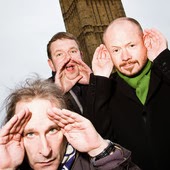 For This Week In Comedy Podcasts on Stitcher.com, I’m reviewing No Pressure To Be Funny, a British podcast I’ve featured before. The brainchild of Nick Revell, Alistair Barrie and Jake Waring, there are lots of other folks involved in this topical live monthly show from the SoHo Theatre, including a panel of journalists and pundits that changes every show. They just kicked off their 6th season with Angela Barnes, Rich Peppiatt, Dan Smith, and Richard Herring, along with host James O’Brien, who keeps it all together. (We've actually got TWO bits from NPTBF - Nick Revell with an emergency bulletin about handbags and a song about randy pandas by Steve Gribbin.

Shane And Friends
Here’s a another show harvested by Tyson Saner for us. It features Shane Dawson along with his producer Lauren Schnipper. This is a new podcast – only been around since June – and there are nine episodes so far. This clip is from Epi8 and features guest Harley Morenstein of Epic Meal Time, a very popular YouTube web series.

The Clutch & Wiggle Experience
We didn't have to go looking for a clip from Clutch & Wiggle - one showed up in the Tweetsack this week! It seems that hosts Rob, Craig and their new "3rd Mic" The Ditz created an accidental "He-Man PSA" while talking about proper pooping etiquette. These are the same folks that run http://CWERadio.com, by the way, where you can hear episodes of Succotash "randomly replayed" during the week!) 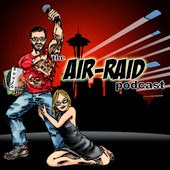 We’ve featured the Air-Raid podcast with Aaron Roden several times before. Aaron’s heavily into the music scene in the Seattle area but he’s also into comedy there, too. And he manages to snag some great interviews with comedians who may be on everyone’s radar but not necessarily getting on podcasts too often. This week he got a hold of SNL veteran Jim Breuer and talked about a bunch of stuff…

The Schmoes Know
The last of this week’s clip contributions – or “cliptributions” - from Tyson Saner. The schmoes in this case are Kristian Harloff and Mark Ellis and their podcast talk about all things entertainment. In their Epi87, they have two guest schmoes – Maria Menounos and Hal Rudnick – who discuss Seth McFarland’s hosting of the last Oscars telecast and also about how subjective humor is.

That's all the Epi70 that there is (except for a really long recipe for "spicy succotash" after the closing credits.) Thanks for listening and please remember to pass the Succotash!