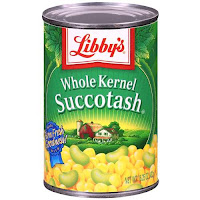 It's been another couple of weeks since I last posted a new epi of Succotash, so I hope you didn't forget about us! We’ve got a bunch of podcast clips in store for you in this – Epi67 of Succotash, the Comedy Podcast Podcast.

I really appreciate you sticking around and downloading or streaming our show. The delay was kind of unavoidable – work has been crazy busy PLUS the computer I use for creating the episodes was damaged while I was on vacation. Fortunately (and coincidentally) past-and-future guest as well as friend-of-Succotash Dana Carvey wanted me to help him out with some writing on a project, so I bartered the job out in exchange for a spiffy new Mac to replace Fleegle, the official Succotash computer.  (In memory of the first one, I am also calling the replacement Fleegle. It's not sentimental, it's just that all my files transferred over to the new one and it would be a hassle just to change its name…)

I want to give a big shout out to our friend and avid listener Tyson Saner, who recently has been clipping some comedy podcasts that HE enjoys listening to and then passing the clips along to Succotash. We got a bunch of them from Tyson this show so I think I’m going to make him this episode's honorary associate producer. (It's probably temporary mainly because I think Tyson is about THIS close to launching his own podcast – at which point he won’t have any spare time left to cut clips for our show!) Thank you, Tyson, I really appreciate it.

Another friend of the show, Charley Miller, featured an interview that he did with ME back in April on a recent episode of his Random Variety Show podcast. And it wasn’t just an interview – this is a real tribute to our show. He plays a couple of classic Henderson’s Pants spots, played a clip of us clipping RVSP, and he even plugged I Hate People!, the business book I co-wrote a few years ago (which is still available online!) On top of all that wonderfulness, Charley dipped into his 1-year-old son’s college fund and kicked a very generous donation in through our Donate Button on the SuccotashShow.com website. So get up to http://RandomVarietyShow.com or iTunes or Stitcher or the PodGods network and give Charley’s episodes a listen. (You should also do like Charley did and feel free to donate a little bit to help us keep this podcast going!)

One of my favorite features of our show is fast becoming the succotash recipes that appear at the very tail end of the show. The original idea came from Jabs at the Dhead Factor and Boganwood podcasts and it was fun to play an actual recipe for succotash after every show – I just grabbed the audio off of YouTube video where people were cooking the stuff. But after doing that for about 6 months, the well was running try. So I’ve been reaching out to some of the more creative comedy podcasters out there and asking them to record recipes. So far we’ve had Chef Eddie Vedder from the Tiny Odd Conversations podcast and Chef Terry with a Cajun recipe from the Don’t Quit Your Daycast podcast. This week’s episode features a recipe provided by Davian Dent over at the Bitter Sound Podcast through his Bitter Sound Cooking Class and Chef Matt Bubbles.

Even though we’ve been down for a couple of weeks, it seems our friends Dean Haglund and Phil Leirness over at the Chillpak Hollywood Hour podcast have been swamped and, although they’ve been very good about putting out their Monday episodes, they’ve been from the set of a new movie they’re producing, directing and acting in called The Ladykillers. As a result, they haven’t been mentioning Succotash, which is fine, but those have been the clips I’ve been playing here – when they mention our show, see? I guess we’ll just call the past couple of weeks a wash.

My latest review on Splitsider.com, for This Week In Comedy Podcasts LAST week, was The Jimmy Shubert Show. Veteran comic and actor, Jimmy Shubert has been around a while but only 2 episodes into the world of podcasting. And I’m going to interview Shubert on the next epi of Succotash, so how about that?

This show also features Episode 6 of Boganwood, the podcast mini-series out of Australia. Just before that rolls, there's more from an interview I had over Skype with the series' creator, Jason McNamara.

Our Burst O' Durst segments have been piling up so in Epi67 we're running two - one towards the beginning and one in its usual spot near the end of the show.

Here are the shows on Stitcher that shown the most movement - up OR down in the past week. Simple.

The Dana Gould Hour
The funny and dark, or maybe it’s the darkly funny Dana Gould is back. I thought I was offline for a bit but he’s got me beat by a month. He has a better excuse – and I’m not telling tales out of school because he mentions it right in the opening to The Dana Gould Show – he was going through a divorce. When I saw him early in the summer, it was just getting started but now most of the hysteria is done with and he getting back to finding the funnier things in life. In this clip Dana and two of this episode’s guests – April Richardson and past Succotash guest Matt Weinhold – chat it up about ghosts in the Comedy Store in Los Angeles, which seques quite naturally into a discussion about cocaine. What? 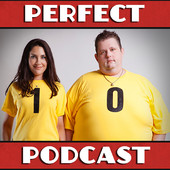 Anyone familiar with Ralphie May’s comedy know that he’s got strong opinions about things. He’s not afraid of expressing them onstage and he’s definitely not afraid to jump into them on his podcast which he co-hosts with his wife, comedian Lahna Turner. It’s called the Perfect 10 and this week it jumped up into the Top 100 on Stitcher at #91, having leaped up 45 places since last week. In this clip, we discover that Ralphie not only doesn’t like wine very much but HATES the movie Sideways, that is all about wine and wine tasting and screwing. This clip precedes a visit that Lahna then makes to take a tour of a winery and to learn a little something about viticulture.

The Bitter Sound
The Bitter Sound podcast out of the UK is often a sort of audio experiment. Host Davian Dent likes bending sound and structure in interesting and – often – disturbing ways. In the spirit of the BBC over there, Davian’s recently concluded his second season of six shows and we have a clip from that last show where a friend has bought him something to commemorate the occasion. 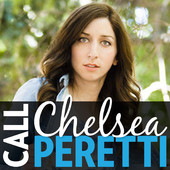 Here is the first of the clips submitted by our buddy Tyson Saner. Tyson is not just an avid listener to podcasts but he’s a very supportive voice out there for a lot of shows – he’s constnatly retweeting stuff from not just Succotash but Chillpak Hollywood Hour, Combat Radio and others that he wants people to discover. I love this clip from Call Chelsea Peretti – a show we hadn’t gotten around to featuring yet – as Chelsea has guest Bill Burr on her podcast and you can tell they like mixing it up a bit.

Action Science Theater
We received a clip from Dan Bond, Brian Macken, and Dan Booth from their relatively new sketch-based podcast. Action Science Theatre is a monthly show. The description on their website reads: “Action Science Theatre is a podcast in the style of a radio play, that mixes action, science, comedy and silly voices to create a welcome distraction from real life for 20 minutes or so. It is unquestionably the finest free online audio drama you can get without trying any others.” There’s a little bit of a feel of The Thrilling Adventure Hour, Superego and Illusionoid to the show – at least in the clip we have, but that’s not a bad thing at all. 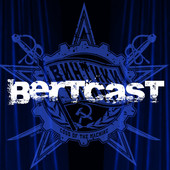 We played a clip from the Bertcast – hosted by comedian Bert Kreischer – when he first launched about a year and a half ago. Our honorary associate producer Tyson Saner lets us revisit the Mancave this week when Bert lures Marc Maron out of the WTF garage on The Bertcast to get real about marriage, kids, drinking, as well as hopes and dreams.

Mission Log: A Roddenberry Star Trek Podcast
Tyson Saner comes through again with Mission Log: A Roddenberry Star Trek Podcast. It’s a one-of-a-kind thingeroo that I’d never heard of but is pretty interesting, especially if you’re into The Trek. It features Ken Ray and John Campion delving into EVERY episode of EVERY Star Trek TV series, recounting the plotlines and then delving into the character motivations, plot wrinkles and everything in-between. There’s a sense of humor to it, for sure, but this is for the true ST aficionado.

Our next clip was sent in by Tommy Kay, one of the hosts of the One Dollar Beer podcast. Other hosts include Frost-T and Anthony Gunn. Tommy’s cover note says, "This is a snippet of our second episode entitled "Purple Lightsabers and White Women". It includes a clip from a segment where one of the hosts reveals some of his list of confessions and secrets that he never told anybody, along with reactions from the other hosts. Thank You." No, no - thank YOU, Tommy, for sending the clip in. Enjoy your first taste of One Dollar Beer…

There it is, Epi67 of Succotash, all neatly wrapped up and ready to pass along to your friends!