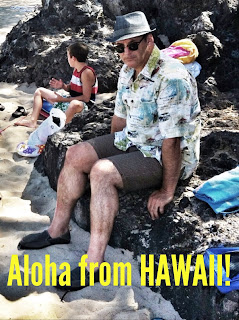 Aloha! I was delayed getting Epi66 out because I was out of town in Hawaii for a vacation last week and pretty much technology free. Had a great time but it was one of those vacations that you need a vacation to recover from when you get back. Or I would have if it wasn't for the fact I knew that folks would be clamoring for their next helping of Succotash!

This episode marks that first time since we started over two and a half years ago that pretty much all the clips were sent in by comedy podcasters. I usually am out there, sweating in the cloud, harvesting clips myself so it was quite a treat to get back from vacation and find the TweetSack brimming over with sweet, sweet clippage.

The exception is this show's visit to the Chillpak Hollywood Hour, where Phil Leirness reveals to Dean Haglund the subject of a Skype call he and I had, along with confederate Taylor Ripley. We've begun the earliest stages of trying to put a new podcast network together. Too early to reveal much more than that, but the ball is rolling.

I love that my friends in the Pod Mafia - which is not a network but a closeknit bunch of podcasters who share information, visit each other's shows and do various favors for each other - have begun supply this show with our "post farewell" succotash recipes. For those hardy few listeners who venture past announcer Bill Heywatt's signature "Good-bye!" at the end of each show, I've been laying an Easter egg since the beginning of the year: The audio of recipes for succotash that I've been snipping off of YouTube. But I've cleaned out that pantry and need more fodder. This week the show is visited by Chef Terry, courtesy of Ed Wallick and his Don't Quit Your Daycast podcast, for a Cajun version of the popular Early American dish.

We continue to serialize Jason McNamara's Boganwood pod mini-series this week, with Episode 5. As we've been doing, that chapter is prefaced with a snippet of a conversation I had with "Jabs" about the origins of the show.

And, as is standard, we've got our two-minute Burst O' Durst provided by the waterboard of political comedy Will Durst.

Here's the hottest action - up OR down - on Stitcher's Top 100 Comedy Podcast lineup:

Over on Splitsider.com, you can find my review for This Week In Comedy Podcasts. I'm listening in on The Bugle podcast, co-hosted by John Oliver and Andy Zaltzman. You're probably aware that Oliver's been filling in on The Daily Show since early June, when host Jon Stewart took time off to direct a movie. I wanted to see if he was still showing up for the podcast gig and, indeed, he's managing to pull it off. 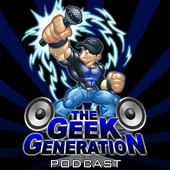 The Geek Generation
We got an email from our friend Rob Logan over at The Geek Generation podcast that reads: Hi, Marc! With the social media attention that Sharknado has been receiving, I thought your listeners might enjoy some exclusive audio from the sequel! And he sent along a clip from his and co-jhost Mike Volpe's Epi143 with that exclusive trailer.

Foster The Podcast
We got a clip in from comedian Justin Foster and his namesake podcast, now 20-something episodes in. He’s in LA, originally from Dallas, and sent along this note: Here's a clip from my podcast Foster the Podcast, the official show of comedian Justin Foster. Short, hilarious, and insane stories from some of the most interesting people I know. Missing kidneys, partying with navy seals, and getting fired by James Franco, are just a few of the stories you will hear every week. I’m not sure who his guest is in this clip, but it’s someone who got drunk from a little person pouring booze from a hut behind a bar somewhere, who then got arrested. The comic, not the midget.

An Idiot At Home
This show's pretty new – there have only been five or six episodes of An Idiot At Home – and it comes from host James Proudlock and permaguest Karl Stott over in Shotten Colliery in the UK. It’s a podcast that focuses on music AND comedy which, in the case, seems to be drawn from the news. 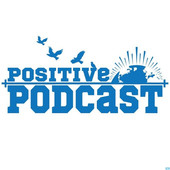 Positive Podcast
I appreciate Adam and Josh of the Positive Podcast sending a clip with a nice note: Hey saw your post on twitter here is a clip from episode 23: Testosterone Zone the latest episode of our podcast. Thanks for doing something like this love to get new listeners. We will shout you guys out next episode. Hope you Enjoy! That’s all great but Adam and Josh didn’t send along much information about their actual show. After a bit of digging, though, I think they’re from Chickopee, Massachusetts, and that their show bounces around between music and comedic commentary. In this clip they chatter on about public drunkenness.

Talking Rubbish
The show's last submitted clip comes via email from a husband-and-wife podcasting team, Eric and Stacey, who host Talking Rubbish. Their cover note into the TweetSack reads: Hello Succotash! Love the show (first heard of you on Podcasting101) and thought I'd try to get you a clip of our show "Talking Rubbish" with Eric and Stacey. This is from show 21 “Ballwater / the worst show ever”, its the very end of the show and I try to explain one of my many phobias (while drunk) to Stacey who ends up not being very supportive and just starts cry laughing. Hope its good enough to be on your show, Thanks! Eric Yes, Eric – congratulations! Your clip IS good enough for Succotash!

Epi 66, at just a hair over 57 minutes, may be the shortest episode we've done this year. Next week should be more robust but hey, for what you're paying, you're still getting a hell of a show! So get out there and pass the Succotash!