The usual format for the show is to be festooned with wall-to-wall clips of comedy podcasts from around the world via the internet. Along with some regular features and some inane silliness provided by our local crew – me, Joe Paulino our producer/engineer, Bill Heywatt our booth announcer, and even Kenny Durgess, our booth assistant. 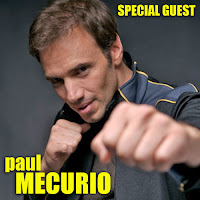 For Succotash, Epi65, we DO have a few clips but we also have an interview with special guest Paul Mecurio. We’ve clipped The Paul Mecurio Show several times before. And the last time was a short clip from an interview he did with Paul McCartney. Well, his entire episode featuring the McCartney interview dropped this week. So we talk to Paul about that, his own career, podcasting, and a whole lot more.

He talks about having gone from sweating out 100-hour-weeks as a big shot Wall Street acquisitions-and-mergers guy and chucking it all to do open mics and one-nighters as a standup comedian. And how his work ethic paid off as he moved up and into the offices of The Daily Show and later The Colbert Report as an Emmy-winning writer.

And then how he ran into Sir Paul McCartney in passing one day, struck up a conversation and ended up inviting him to be interviewed for his podcast. The rest is online and we have the interview with the guy who interviewed McCartney. I'm never washing my audio recorder again…

There was mostly sluggish movement this week on the Stitcher Top 100 Comedy Podcast list. MOSTLY. There were a few gigantic climbs up the ladder, though and a few jumpy jumps as well. (That’s a technical term. Jumpy jump. It means, well…look it up.)

We're up to Episode 4 in our featuring of Jason "Jabs" McNamara's Boganwood pod mini-series. In my chat with Jabs before it play, we talk about what some other podcasters think about the show and also get into where he got the idea for some of the characters in the show.

Since the beginning of the year, I've been featuring a little Easter Egg at the end of almost every episode: A recipe for succotash - different each week - pulled from videos on YouTube of people preparing the dish. But now I'm scrapping the bottom of the saucepan as I've gone through most of them at this point. So I reached out to Travis and Brandi Clark of the Tiny Odd Conversations podcast and they were able to get Chef Eddie Vedder to whip up his version of succotash exclusively for our show. So if you listen past the show ending, after Bill Heywatt says his goodbye, you can hear Chef Eddie prepare his dish while he tells - nay, sings - you how to do it at home.

Our Ambassador to the Middle Will Durst lambasts the conservative folk of Texas in this week's installment of his regular feature. And if you're going to be in the San Francisco area this summer, Will's show BoomeRaging, LSD to OMG, has been extended! It plays ever Tuesday night at the Marsh Theater in the city. visit http://WillDurst.com for more information. 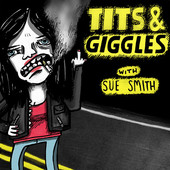 Tits & Giggles
Jumping up 632 places to hit #68 in the Stitcher Top 100 Comedy Podcasts this week, in only its second week, it's “The podcast for women in comedy AND their supportive male friends.” according to the homesite for the just two-episode old podcast. In our clip, host Sue Smith (actress, writer and comedian)  talks to Orthodox Jewish transgender comedian Dana Friedman talks about the pressure, in front of a Jewish audience, whether to do Jewish material or not. (Spoiler Alert: Sometimes, she doesn’t.) 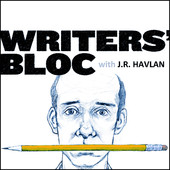 Writer’s Bloc
Writers’ Bloc is a podcast that leaped up 355 places, ending up at #65 this week on the Stitcher Top 100 Comedy Podcasts, and it’s a show all about the business of comedy writing. Hosted by J.R. Havlan, an 8-time Emmy Award-winning writer for The Daily Show with Jon Stewart, his recent guest was Scott Jacobson, the co-producer of TV's Bob’s Burgers. In the clip we have, Scott talks about how the show was originally pitched to the network, and they also get into some of the characters. 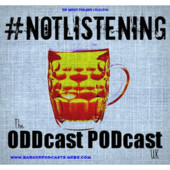 The OddCast Podcast
Congratulations to Adam Barker over at The Oddcast Podcast on hitting his Epi100! Adam’s got several shows under the Barker Productions banner, including the It’s Not Soccer podcast and the Ask An American podcast. For Episode 100, he had fellow podcasters from all over the place chime into an extensive audio play, in which a visitor from the future comes back to warn him about how dangerous his podcast is going to become. I clipped a clever bit from the top of the show, springing off of his catchphrase, “Nobody Is Listening”, and based on the Baz Luhrman song, Everybody’s Free To Wear Sunscreen.

Doesn't seem like a lot in writing but this episode runs over an hour and 20 minutes. (Not as lengthy as last week's fun epi with guest co-host Monica Hamburg from the Dazed & Convicted podcast, but still pretty ample!) Hope you enjoy it. Fell free to let me know how you're liking the show by emailing me at marc@SuccotashShow.com or show your appreciate even more concretely by going up to iTunes where you can rate and review Succotash. For even MORE concrete-ness, you can use the Donate button on the side of of our homesite and toss us some spare change to help us keep this mothership hovering a little longer over Podcastland.

Don't forget to pass the Succotash!