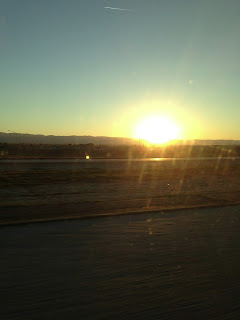 This title refers to the fact that we're back to an all-clip show this week. No interviews (although we have a goodie coming up next week!) but I did want to thank everyone who commented, tweeted, emailed and otherwise gave me feedback on last week’s Epi51.5, my I-5 Extra Episode. It was experimental, really – just me recording me as I drove back to San Francisco from Los Angeles up Interstate 5. Maybe I’ll try it again on my next road trip. And it gives me the confidence to play a little bit more between clips of the regular podcast, so we’ll see where that goes.

To the left is a shot of the sun setting as I trundled through the San Juaquin Valley at the wheel of Studio F, my Fiat 500. (It's not that picturesque but I post it because I love how pissed off people get when they think of me taking pictures while driving...)

I mention in this episode that I'm thinking of dropping the Stitcher Top 10 Comedy Podcast Countdown that we've been featuring on Succotash since the beginning of the year. Reason? The shows just don't change positions enough to be very interesting. None of these, for instance, are unfamiliar:

On the other hand, for the first time I also read down the BOTTOM Ten of the Stitcher Comedy Podcasts. Lots of action and places being swapped down there in the cellar. So maybe I'll just do that from now on…

93. The Best Show on WFMU with Tom Scharpling

This episode our Ambassador to the Middle Will Durst ponders the ex-pontiff and what sort of mischief the former Pope Benedict might get into in his retirement.

Comedian Jake Johannsen's podcast is pure Jake. Even when he has guests, it’s got that "Jake" feel to it. I used to hang out with Jake and his guest this latest episode, Bobby Slayton, a lot, as we were all in the San Francisco comedy scene. They were both as the Aspen Comedy Festival recently and Bobby recounts part of a story from when he got to have dinner with Woody Allen. 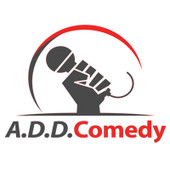 David Razowsky is the host, creative force, and backbone of the A.D.D. Comedy Podcast. Ian Foley is the producer and creator. They talk to a lot of comedians, most of whom have come out of the ranks of improv, but also actors and writers. We clip part of David's great interview with screenwriter Carl Gottlieb.

Friends-of-Succotash and podcast royalty Dean Haglund and Phil Leirness continue to fascinate with their Chillpak Hollywood Hour podcast. They get into X-Files memorabilia by way of an email from a listener in this clip. Oh, yes, and they still have a page on MySpace.

Too Heavy Too Skydive

Gotta clip in from the guys over at Too Heavy Too Skydive, which is still one of my favorite podcast titles out there. This is Matt's interview with Kai, no last name, who you may have seen on the internet a couple of weeks ago when he stopped a rampaging guy by pulling out a handaxe. 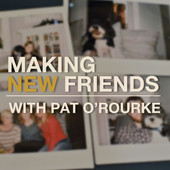 Pat O’Rourke invites people into his kitchen every week and I guess gets along with all of them because his podcast is called Making New Friends. He sent this clip along and maybe I lost some notes along the way because, even though I checked the website, I’m not sure who his new friend may be.

I THINK the Sup Dude podcast is from England so it kicks off our Triple Shot British Invasion clips this show. AJ & Nathan host a show about a bunch of stuff and yet seem to almost always have time to review a James Bond movie. Here they’re getting into Her Majesty’s Secret Service starring that one-off Bond, George Lazenby.

Adam Barker of Barker Podcasts is back with his It’s Not Soccer podcasting partner Billy Bilo. Adam didn’t send a clip but he did send where to find this clip in their lastest episode which, really, is the next best thing. It’s about a package delivery that happened to a friend that went south.

This clip is a last minute entry to this week’s show, suggested by the aforementioned Adam Barker who says that it’s a great representative of “north English humour”. I guess that’s humor with a “u” after the  “r”, right? Uncle Arthur seems difficult to find a lot about so just enjoy his ranting about fat people, won’t you? 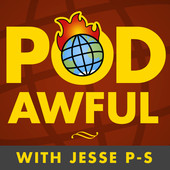 Jesse P-S has kicked off Season 5 of his Pod Awful podcast. His guest, Mike Blejer, a comedian and host of his own podcast, Malignant Brain Humor, and he spend part of the kickoff episode trying to track down a fortune teller of sorts…

I’m not quite sure what the main thrust of the Salty Language podcast is about. I think it’s a “shootin’ the shit” show, with hosts Bryan, Tony & Tate doing just that. Here’s a chunk that spins off of reading a news item, so that should be a clue, right?

The Red Mud & Rolling Hills podcast is a sister/brother show, with Dawn Smith and her bro Bo Tate being real from the foothills of South Carolina. Their website proclaims that they use swear words as “sentence enhancers” and there is no shortage of them in the clip we have, where they’re talking about footwear and handsomeness.

Once again, we've done our job. Now get out there and do yours: Pass the Succotash!