It's been roughly a year this month since I started Succotash and it's been an very interesting journey just getting to this point. Originally I foresaw us moving into a weekly model but as you can see, with us just now getting to Epi23, we didn't even get to a pair of shows a month. I've been working on streamlining the workflow, however, and hopes are that the remainder of 2012 will see more Succotash more often!
For the third time, Dana Carvey graces us in Studio P ("The Home of The Hit!") and he's not alone. Frank Cronin is a globetrotting Irishman, capturing his journeys on video and posting on YouTube on his Glowpunk channel.
Currently in the United States for as long as his visa holds out, he's going to travel the country with his video camera, grabbing as much Americana as his hard drive will hold. This is Frank's very first podcast appearance, which makes this a Succotash exclusive. And, in another excloo, we also have Tom Carvey, in the studio — Dana's breakdancing teenage son. (Although there's no breakdancing in the show, Frank WILL have a video up soon featuring Tom's crew doing their thing.)
Early in this show, I feature an audio clip from THIS video by Frank, called Cliff Jump. It's all about plunging off rocky ledges into the freezing cold North Atlantic on the coast of Ireland. Here's the video in its entirety...

Even with all of these guests, we got in a pile of comedy podcast clips AND our Burst O' Durst. Of course, the show also runs a full hour and a half. (Try THAT on terrestrial radio!) Here's who we have this time out:

PF's Tape Recorder
PF Wilson uses his tape recorder to capture life's little moments (TV, too) and then the clips he selects are the springboards for commentary and sketches. This particular taste deals with a not-too-bright, pooch-stealing cable guy. The show's an inventive idea. Get more nuggets from the source, at either http://pfradio.podbean.com/ or on iTunes.
The Gee & Jay Show
I've referred to guest Frank Cronin as Succotash's Irish interpreter in the past but he earns his keep this show as we spin three clips from Belfast's The Gee & Jay Show. These lads - Gavin and James - host a rollicking time and the more listen the more you understand. For more immersion, hit http://geeandjayshow.com/ or iTunes.
The JV Club

This new podcast on the Nerdist site is hosted by actress/comedian/SF Sketchfest organizer Janet Varney. More conversation than interview, Janet goes one-on-one with a female guest who, like Janet, is in the entertainment world. In this clip, her guest is comedian Natasha Leggero. You can get extra helpings of the JV Club over at http://www.nerdist.com/podcast/the-jv-club/ or on iTunes.
Jay V Mail
This podcast, hosted by Jay V and Brady, started back in 2005, making it one of the earliest podcasts around. But then it disappeared two years later, only to reappear last year. Simple premise: Jay V answers his mail. One letter, one episode. They rarely run over 10 minutes. The hot button topic this clip? Zombies. More? Go: http://www.blubrry.com/jayvmail/, iTunes or Stitcher Smart Radio.
Don't Quit Your Daycast
DQYD is a new show, with about a dozen epi's now. And it's hosted by friend-of-Succotash Ed Wallick, who continues to sharpen his wit on bits of rant. Turns out that Ed doesn't like it when dismembered human feet wash up on his nearby beach. Who knew? Find Ed lurking at http://dontquityourdaycast.com/ as well as on iTunes.
I Am Idiot
Ben, Keith and Howard (they put the i's in Idiot…) are back for a second time, this time because one of the boy's has scribbled a children's book. Spoiler Alert: It sucks. And the others are only too happy to critique it. More in store at http://www.iamidiotcentral.com/ or on iTunes.
The Green Room
We haven't featured Sean Green's little slice of podcastland since one of our very first episodes, so it's good to be back in touch. And there's a great story by his guest Tess Barker about when her dad tried to scare her straight. Didn't work. But funny getting there. Drop into the Green Room at http://seantgreen.com/, iTunes or Stitcher.
The Thom & Jeff Show 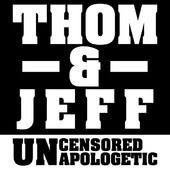 These former radio guys - Thom and Jeff - have found a new lease on broadcasting life by jumping into a podcast. In this clip, they're playing a little something they like to call The Fuck No Game. Get more fun features and laughs at http://thethomandjeffshow.com/ or on iTunes.
Burst O' Durst
This time around, our in-house political pundit Will Durst points out how we can expect to watch Republican Presidential candidate Mitt Romney morph his performance and perspective into something that an unsuspecting moderate or liberal might fall for...if they were brain dead. Get more Durst at http://WillDurst.com or catch his tweet on Twitter @WillDurst.
Things to remember: Rate Succotash on iTunes! Your rankings and reviews help to push us out into the light where more people can see us! Also, click on the Donate button on the website to contribute to the Save Our Hard Drive Drive! Will less than a hundred bucks so far, we may never get this drive fixed and the trapped interviews off of it. so give, won't you? And buy some merch at the Succotashery! Just click the link on our blog page.
That's it. Until next time, please pass the Succotash!
— Marc Hershon