I gotta tell you - trying to pull a podcast together with a fulltime job while moving and having sketchy Internet connectivity is harder than it sounds. Apologies for the gap between 'casts. And for the sound quality on this particular epi. Not only was I NOT in Studio P with ace producer/engineer Joe Paulino, but our featured interview with comedian/actor-turned-director/producer Jordan Brady turned out to be really echo-y, which I didn't discover until after we were all done. And then my audio wraparounds during the show were recorded late at night and I had to be quiet, so the whole episode sounds like it's been commentated by a golf announcer.

That rundown get you in the mood to listen? 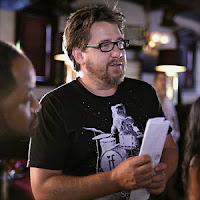 Audio weirdness aside, this is a fun interview with Jordan, who I first met years ago during the half year he lived in San Francisco during his life as a road comic. He's gone on to direct some films, some TV and a boatload of commercials, but what put him back on the comedy radar bigtime was his release of I Am Comic, a documentary about being a comedian in and around the real world. We talk about that and a whole lot more in this chat.

Jordan is a big podcast fan and we not only talk about some of his faves but we play a few clips from them, too. Plus I've got some new finds that I'm happy to share with you in this episode. Throw in a classic Henderson's Pants spot, our Burst O' Durst with Will Durst and you've got yourself a massive helping of Succotash (the episode runs more than an hour and fifteen minutes.)

Here's who we're listening to this week...

From a watering hole in north Texas comes Brian, Kyle, Terrill, Mike, and Curtis — the Pub Guys. These guys have logged more than 90 episodes, all from taverns and they've definitely created their own style and format. Their listeners become contributors to the show (and sometime even co-hosts), so check 'em out on iTunes and Stitcher. They also are big supporters of podcasts, so drop by their homesite at PubGuys.com if you want some recommendations on even more ear munchies.

I just discovered this quirky funfest, hosted by Travis and Brandi, and liked what I heard enough to give them a review over at This Week In Comedy Podcasting on Splitsider.com. Turns out that Travis is the son of comedian/actor Blake Clark, who drops in to bump memories with his son about raising a family when you make most of your living on the road. They're 40+ epis in, so get yourself more tiny and odd at TOCpod.com or on iTunes.

A lot of the podcasts I find on my own but we're getting more and more pings on Twitter from podcasters themselves. I'd been following the tweets of comedy writer Darren Staley (aka @Crobama) and didn't realize he was the host of this homegrown interview-based podcast. Check out his homesite for the backstory on the show's title. And to hear more, he does his show on Blog Talk Radio or you can scoop it up later at iTunes.

You Made It Weird

Guest Jordan Brady is a big fan of this fast-growing podcast on the Nerdist network and so am I. Host Pete Holmes is a comedian and the voice of the ETrade baby on TV - how's that for a pair of credits? He mostly manic in his p'cast and his guest often seem to get caught up in his energy. One guy who is too centered to be swayed is Larry Miller, who guests on this clip. Check out YMIW over at Nerdist.com or on iTunes.

The most popular show in podcasting today? Quite possibly, and with good reason. Host Marc Maron knows his way around an interview and usually, if its a comedy contemporary, he can dig pretty deep (often fueled by an ancient jealously the host has for the success of others.) In this case he's got nothing but adoration for the unassuming, comically brilliant Fred Willard. There's so much more over at WTFpod.com, iTunes and you might even consider picking yourself Maron's smartphone app for even more goodies.

There was a time when we weren't actively listening to DLM, way back after Epi9 when host Doug Benson had sent me a message requesting we not play clip from it because he didn't think the humor translated well in short chunks. AFter seeing guest Jordan Brady tweet about it being one of his favorite p'casts (and my subsequent followup as to why we don't feature it on Succotash), I received another message from Benson that, in essence, gave his blessing to play a clip once in a while. So we're back! And this is a rollicking sample, feature Doug with guests Pete Holmes, Rob Huebel, Kumail Nanjiani and Matt Myra.

That's everything I could cram in this time around. Hope you enjoy it - sound problems aside - and that you remember to pass the Succotash!