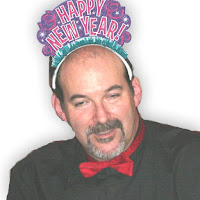 Back with producer Joe Paulino in Studio P for this New Year kickoff show! Succotash Epi 17 is stuffed full o' clips, this time a look back at some of my personal favorite p'casts. But we're only retreading a couple of cuts — I've selected a bunch of recent clips from amongst the podcasts I tend to listen to most (when I'm not scanning, scrolling and slicing up bits n' pieces of the known and unknown p'casts that have yet to grace our show...)

2011 was a banner year for Succotash, mainly because we kicked this whole mess off last April. Our first lucky break was getting a kickass theme song provided to us by our musical director Scott Carvey. And we've gotten a lot of nice ratings on iTunes (but we can always use more!), kindly comments on Twitter, got picked up by Stitcher Smart Radio, and yours truly started contributing reviews weekly to This Week In Comedy Podcasting over on Splitsider.com.

On the downside, we have yet to attract a sponsor (besides Henderson's Pants who, between you and me, doesn't pay us squat), which led to the brilliant idea of trying out being listener supported. While I'd love to be able to say this is your Succotash, not a single soul has clicked over there on the sponsor button since we put it up. Which means this is still my Succotash, damn it!

We're sure glad you're listening, of course, and we welcome your emails, tweets, and voicemails called into our Succotash hotline (1-818-921-7212). We're looking forward to an amazing 2012 — in addition to our usual lineup of funny, new, and interesting podcast clips from around the internet, we're looking into doing some live shows, hooking you up with some more amazing interviews, and just having a whole lot more fun before the Mayan prophesy takes over and kicks our butts in December...

Here's what we're serving up this episode: 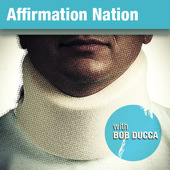 Affirmation Nation
Can I play too much of Bob Ducca? I think not. To prove it, here's a rundown of everybody's favorite ex-stepdad with a list of his New Year's resolutions. Seth Morris kicked off this series over on Earwolf this year and the world's never been a brighter yet sad sackier place.

Comedy Bang Bang
Another offering from Earwolf — this time from one of its founders and operating partners, Scott Aukerman — CBB changed its handle from Comedy Death Ray Radio this past year but has retained its commitment to keep providing warped, weird and funny stuff thundering down the pipeline.

The David Feldman Radio Show
Ringmaster David Feldman is an old buddy of mine from his San Francisco standup days, but that's not why we feature him on Succotash. It's because his show is inventive, funny and often hard-hitting when it comes to taking the world's politicobankstershitheads down a peg or five.

Fitzdog Radio
There's something endearing about Greg Fitzsimmon's sincerity even when his humor gets biting. He has few qualms when it comes to exposing his own faults to his audience, a disarming quality which tends to make his guests open up (probably more than they were expecting to.) This clip is a sample of him at his soul-bearing best.

Mike And Tom Eat Snacks
I probably play clips from MATES more than is good for me, just from a calorie intake standpoint alone. But the repartee between hosts Michael Ian Black and Tom Cavanagh, based around the simple notion of picking, tasting and rating snacks, is unique in the realm of podcastery and always makes me laugh out loud even when I'm by myself, which is vaguely disturbing.

Succotash
What?! Yes, I'm narcissistic enough to think some of the shit we do on this show is hilarious. Witness one of our Boozin' With Bill segments. Or any of the Henderson's Pants commercials. Then, of course, our occasional guests can rip the place up. One of our most pointed-out pieces is from Epi3, when Dana Carvey was our in-studio guest and we got a call from Sir Paul (no last names, please...)

Superego
I only discovered Superego this year - they've been around for a few - and I'm glad I did. Rooted in improv, this four-man team is always joined by a crew of some of LA's funniest improv, sketch and standup performers. And they never fail to throw together some stunning audio comedy.

This Week With Larry Miller
I've been a fan of standup comedian Larry Miller since he first worked a week headlining at Seattle's The Comedy Underground, which I managed in the mid-80's. His podcast has already had over a million downloads and it's a delight to see this raconteur storyteller capturing the attention spans of some younger listeners who have maybe never seen him on stage.

What The Fuck
Arguably the hottest podcast on the interwebs for the past couple of years, Marc Maron and his combination of manic self-introspection and probing, insightful interview style makes for a thoroughly entertaining show. Grab you some right here.

Burst O' Durst
We round out the first show of the year with a shot from our regular contributor, raging moderate politcal wag and wit Will Durst. He started shooting his reports to us early in our inception and continues to be a terrific flagpole in our comedy podcast bigtop.

That's quite a little lineup for you - hope it keeps you sated until the next epi is served up. Next time we'll have an interview from an old comedy chum and a bunch of fresh clips from show we haven't featured before. Until then, please remember to pass the Succotash!