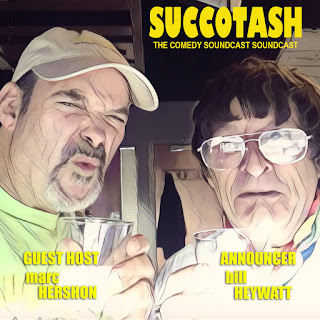 Once again, it is I — substitute host, executive producer, and ripstop nylon tenting material Marc Hershon — filling the host chair for proud papa Tyson Saner! Tyson and his wife, Laura, along with young Jareth Saner, are doing great.

With any luck at all, Tyson is figuring out the parent game – at least in the early going, because this is a puzzle that no parent really ever gets  handle on — and he should be back Succotashin’ it in no time.

In the meantime, you’ve got me, the OG host of this audio hayride, and I’ve got a bushel basket of grand soundcast clips to toss into your ears. They include:

• I Shake My Head

The story behind Succotash, if you didn’t know, is that I started this show back in 2011 as a way to showcase comedy soundcasts because, at the time – believe it or not – the medium of podcasting was floundering. People were having trouble finding them or knowing how to listen to them, and a lot of what was available was somewhat sketchy in terms of both content and quality.

Well, since then, it’s clear that soundcasting has found its footing and now we’ve hundreds of thousands of shows.  I like to think that Succotash has something to do with the medium surviving and paddling to the shore, to emerge, stand up on its own two feet, and evolve into the awesome force it is today. I know that’s not true, but I still like to think about it…

Nonetheless, I encourage you to take in today’s clips and — if you’re liking one or more of the show’s we’re sampling — go and check out an entire episode. Most of what we’re featuring today can usually be found on outlets like iTunes, Spotify, Stitcher, iHeart Radio, SoundCloud, the Laughable app, and a bunch of other distribution points.(You can also just click on the linked titles above to be taken to the show's homesite!)

Today’s show is brought to you by Henderson’s new Parka Pants, and by Trumpoetry.com.

That’s all she wrote when it came to Epi188 of Succotash, the Comedy Soundcast Soundcast. Please remember to rate and review this show on iTunes. And if you have something you want to get off your chest, you can always call our toll-full Skype line, at (818) 921-7212, and leave us a message that we can play on the show.

Tyson may be back hosting as soon as our next installment – who can say? – and I may be contributing a new feature we’ve talked about  but I’ll save that as a surprise.

Until we meet again, I will gently remind you to PLEASE pass the Succotash!