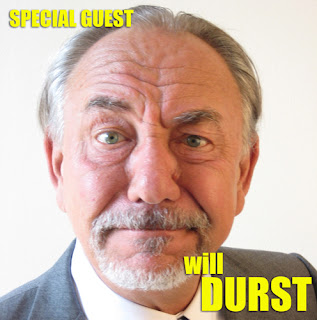 Yeah, it’s me. Marc Hershon, your host and HO-scale Lionel train for Epi134 of Succotash, the Comedy Podcast Podcast. This is an installment of Succotash Chats, with almost 100% yakity yak and almost 0% clippety clips.

Our special guest this episode is none other than our very own raging moderate, political comedian and social commentator Will Durst! Yes! Unbelieveable — after his priceless contributions for the past FOUR years of our Burst O’ Durst segment, I finally managed to wrangle the great man himself into a sit-down.

It really shouldn’t have been that hard to get together with him – we live in the same goddamn city. And we’ve both been appearing periodically together on the same stage the past few years during screening of the 3 Still Standing documentary. It’s about the early days of San Francisco stand-up comedy starting back in the early 1980s boom times, and featuring Will, Larry “Bubbles” Brown and Johnny Steele.

Anyway, it’s a good time to get Will in front of the mic. Every four years we have the Presidential election and Durst blooms like one of those crocus plants, except his comedy is being liberally – or, rather, conservatively — fertilized by Donald Trump’s bullshit. So he’s in rare form.

I just got back from LA this past weekend, where I was hosting the kickoff episode of The Carvey Podcast, a new show featuring Dana Carvey and his two sons, Dex and Tom. Their roommate Rickie was also onboard for this inaurgural event, and veteran comedian Barry Sobel jumped in for the last few minutes as well.

Things got a little dicey about a half hour into the proceedings. Dana and I kicked things off and he was really funny. The audience – which wasn’t huge – maybe 20 people in the Improv Lab — was enjoying it. And why not? A lot of them were friends of mine! So Dana had gotten up to make room for the boys at the table on stage. He was moving around to the other side of this standup piano on the side of the stage and… well, to find out what happened next, you're going to have to LISTEN to this episode!

A NEW WAY TO LISTEN

I’ve been using a brand new app that just launched last week in my effort to make listening to comedy podcast episodes easier and easier. It’s called Laughable, and I’m finding it to be pretty handy. I’ll talk about it more on our next Succotash Clips episode and maybe have an interview with the brains behind Laughable — a guy names Ned Kenney — if I get the chance.

In addition to my chat with Will, we have a double dose of our Burst O' Durst segment, one that plays before the chat, and one that plays after the Tweetsack segment. So strap in!

This episode is brought to you by Henderson's Wake Island shorts. Since most people have trouble tracking down Henderson's Pants, you can also help out Succotash by clicking on the Donate button at the top of our homepage. Or consider festooning yourself in some style of our merch at the Succotashery. Then there's always shopping online at Amazon - just click through to them by clicking on the banner at the top of our page — magic web elves make sure we get a slice of your purchase.

Please remember to pass the Succotash!