Welcome to the first installment of Succotash Shut-In of 2021. I'm your bi-monthly host, Marc Hershon, and you can punch me in the nuts and call me a soprano, but what a hell of a year it’s been already! It’s more like 2020 won’t let go.

I did not have “President incites insurrection” on my New Year bingo card.

Things are so unsettled in the US right now that I was debating whether to come back from our scheduled holiday break. But, in the end, realized that both you and I could probably do with some laughs, courtesy of the fine folks whose soundcasts we’re clipping this time around.

Before I tell you who we have in store today, if you didn’t catch our last epi before the holidays, featuring my every other weekly co-host Tyson Saner, be sure to check out Episode 243 featuring his interview with Cassandra Cardenes, which can be found on Apple and Google Podcasts, Spotify, Stitcher, iHeart Radio, and on our homesite: http://SuccotashShow.com. 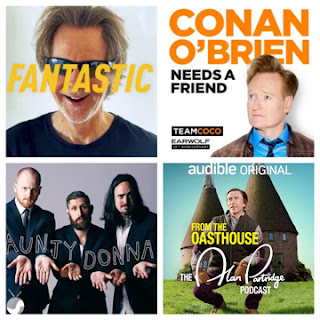 This week we’re featuring clips from such comedy wonderfulness as Fantastic! with Dana Carvey, Conan O’Brien Needs A Friend, Aunty Donna Podcast, and From The Oasthouse with Alan Partridge. Some heavy hitters in this week but what the heck? It’s first show of the year…and we needed something strong to get that taste of radical unrest out of our ears.

In addition, we’re sponsored by Henderson’s Pants new Auld Lang Sign pants, and – probably for the last time that I’m hosting the show – Trumpoetry.com, which is rapidly winding down to Inauguration Day.

Fantastic! With Dana Carvey
First up is a brand new show from an old friend of Succotash and frequent guest Dana Carvey. (In fact, he was last on this past November in Epi229.) He’s been talking about doing his own show for years – I even was the announcer and kind of sidekick on a podcast pilot we did a few years ago that never went anywhere. But now there’s Fantastic! with Dana Carvey. He’s got no one telling him what to do – there’s no network, no bosses – just him, a sidekick named Chris Rios, who happens to be the woman who cuts Dana’s hair, and his son Dex, who is producing the show. He talks to an old comedian pal, Larry “Bubbles” Brown, and also to his younger sister, Lori. This clip is from when Dana introduces us to a new character he’s working on, a blue collar comedian named Red Rednecky, the Redneck Comedian…

Conan O’Brien Needs A Friend
A show that really delivers entertainment, and a lot of laughs, is Conan O’Brien Needs A Friend. I grabbed a clip from a recent episode where Conan O'Brien’s guest was Matthew Rhys, who’s not only a terrific actor from stuff like The Americans, Perry Mason, and A Beautiful Day in the Neighborhood, but he turns out to be really funny. I also didn’t expect his amazing Welsh accent, which I’d never heard before. In this clip, they talk about the character of Perry Mason and how much wigs played into the action of The Americans.

Aunty Donna Podcast
I was originally turned onto Aunty Donna, a sketch comedy trio from New Zealand, by friend of Succotash Jason McNamara (or just “Jabs” if you're nasty.) They have a limited run TV show on Netflix produced by Ed Helms that totally whacked out, bizarre, and wonderful. But the trio — Mark Samual Bonanno, Broden Kelly, and Zachary Ruane — has had a soundcast for the past 5 or so years called, aptly enough, Aunty Donna. At the end of 2020 – is it actually over yet? – the trio had a two-part “Best of 2020” show, where they featured their Top 10 (or 11…they couldn’t decide) sketches from their show. This clip features the fifth best bit, which is, eventually, moms and dads beating their kids…eventually.

From the Oasthouse with Alan Partridge
If you’ve never caught any of the many incarnations of Alan Partridge, a fantastic character created by British comedian and actor Steve Coogan, now is your chance because he finally has a soundcast. Partridge is a showbiz personality that is just full of himself and has managed to fail downwards ever since his first TV show, Knowing Me, Knowing You. Now he’s got From the Oasthouse. (I went to the trouble of looking up oasthouse, and it is a little building for drying hops as part of the brewing process.) Rather than making beer, Alan is using his for soundcasting. This clip is a chunk that was released as a promo for his second episode and its actually Alan outside the oasthouse, as he’s having a bit of a ramble.

That’s what we have in store for our first show back from the holiday break. Now we just have to weather the shitstorm being kicked up before Ol’ Orange Numbnuts is shot through the grease and run out of town next week (if not sooner.)

Remember that Tyson will be here next week for Epi236 with a bouquet of comedy soundcast clips for you. And until I return, stay safe, try not to invade any government facilities, wear a mask, and wash your hands. And when you’re standing in line to get your COVID vaccine shot, and that person behind you asks if you’ve heard anything good lately? You be sure to pass the Succotash!