Saluton and feliĉan Kristnaskon! Estas mi, Tyson Saner, your host this week on the final Succotash Shut-In episode for 2020. And what an episode it is! Comedian, actress, improvisational performer, soundcaster, and all-around great person Cassandra Cardenes joins me for her very 1st Succotash episode as we talk at length about the Christmastime movie classic (?), the 2003 Richard Curtis-directed film with the sizable ensemble cast: Love Actually.

(BTW, last week, Marc Hershon interviewed his fellow Vulture.com soundcast reviewer Becca James for Epi233 and you can still listen to it on Google and Apple podcasts, Spotify, Stitcher, Podbay, iHeart Radio, and the Laughable app just to name a few places…as well as over at www.succotashshow.com which is, of course, this show's homesite. 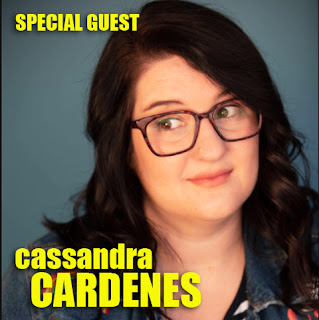 Cassandra joined me for this conversation immediately after appearing on a weekly soundcast she has been appearing on for the last 5 years, Nooner Podcast over at Kevin Smith's SModcast Internet Radio…which YOU can listen to live just about every Tuesday night at 7:30 Pacific Time. She also has a regular soundcast called Trashy Trashy that she co-hosts with Erika Curry. (Trashy Trashy was clipped for Succotash Shut-In Epi216: "Clippin' The COVID Blues Away", and both Cassandra and Erika were guests on the most recent episode of Anti Social Show #89: "Fun With Trash", which you can find by Googling "Sounds By Tyson Saner" or by going to www.tysonsaner.com and clicking the link for my Soundcloud.

This episode also includes a holiday-season-appropriate commercial from our longtime ersatz sponsor Henderson's Pants and what could be the final reading from our more recent sponsor with the website, TrumPoetry.com…maybe. We shall see what the new year brings.

This is the final Succotash Shut-In of 2020. What a year this has been and still continues to be. I would say something like "I can't wait for 2020 to be over," but as I ponder my own mortality as well as that of those around me that I love, care for, and respect, I reflect on the finite nature of pretty much everything and choose to experience every day and make each one last as long as it can.

The fear of death can make people desperate in particularly nasty ways. Some people claim that they aren't afraid of dying and use that as an excuse to be careless and/or reckless with the lives of the people around them…which I would like to go on record as generally wanting to discourage that sort of thing. After all, encouraging the spread of a deadly disease is tantamount to domestic biological terrorism. Imagine if it were treated as such.

Now, shake it off and imagine peace on Earth and goodwill towards all humankind. Imagine that love IS all around…because it actually is…actually…

If all goes well, I'll talk to you in 2021 on January 23rd, I believe. 4 days before my son's 2nd birthday. Thank you for listening, Thank you to Marc Hershon, Joe Paulino, Bill Heywatt, Scott Carvey, and Kenny Durgis for making the show a thing and for including me in it. Thank you to all my friends and family who might hear this one day…BTW, don't forget to please pass the Succotash!