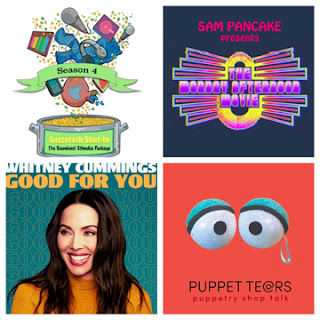 Saluton, estas mi Tyson Saner. Welcome to the soundcast known as Succotash Shut-In: The Soundcast Stimulus Package. It's Season 4, Episode 232, and I've got some clips for you from three soundcasts I've been listening to recently, namely Sam Pancake Presents the Monday Afternoon Movie, Puppet Tears: Puppetry Shop Talk, and Good For You with Whitney Cummings. There's also going to be a reading from "TrumPoetry.com" and a spot from our other original fake sponsor Henderson's Pants and their brand new Holiday Pants.

By the way, Epi231 featured bloopers from 5 soundcasts which were Conan O’Brien Needs A Friend, A Paranormal Chicks, Roll Out!, Who Back When, and Voyage to the Stars. It was a very entertaining episode hosted by Marc Hershon with whom I alternate hosting duties with weekly. You can find it in the same place you found this soundcast or any of the other options available for soundcast listening including, but not limited to: Apple or Google Podcasts, Stitcher, Spotify, iHeart Radio, the Laughable app, etc. There's also the homesite at www.succotashshow.com or at succotash.libsyn.com where you can find all the shows dating back to 2011.

As I'm recording this, it's early December of 2020, a year that has been possibly the worst year in recent memory since…like 2016? That was pretty bad. 2014 wasn't great either come to think of it. And 2012 everybody was talking about the "end of the world…"

Actually, I remember 2012 having some bright spots. It's the year I met Ethan Dettenmaier of Combat Radio and, as a result, I met many other guests of Combat Radio including Marc Hershon who was at that time the host of a show called Succotash, The Comedy Podcast Podcast, which subsequently became Succotash, The Comedy Soundcast Soundcast and then, eventually, Succotash Shut-In which you are listening to now.

I also met Dean Haglund and Phil Leirness of Chillpak Hollywood Hour of whom this program has featured clips and with whom this show and many of it' contributors have collaborated with over the years. In fact I took part in a 28-hour "Mayan Marathon" that Chillpak held live on the internet counting down the hours until the impending apocalypse. I remember taking photos in realtime as a way to commemorate the occasion… if there was, in fact, a world after said apocalypse where my iPad 2 had both survived intact but also had a charge…That was a really good time…

2012 was also the year I met Hunter Block on Twitter. We became friends and, as of October of 2016, co-hosts of a soundcast called Anti Social Show which is still releasing episodes as time moves steadily on. So, there are a couple of bright spots from 2012 and 2016…

I guess what I'm getting at is that all years have their bright spots in some way or another for someone or another and it is important to remember that when things get really dark. In 2020 I got to spend most of my time with a special little guy named Jareth as he entered his toddler stage. I consider these recent memories to be of truly the happiest moments I have ever had in this life that I've had so far. I don't think I could be more grateful for these bright spots than I am…but I can always try.

Anyway, thank you for listening…or reading if this is the episode blog.

Puppet Tears: Puppetry Shop Talk
The soundcast Puppet Tears feature hosts Adam Kreutinger and Cameron Garrity having in-depth interviews with the world's most passionate puppeteers. On March 27th of last year - 2019 or "Pre-pandemic as it's become known - Ryan Dillon stopped by for a jam-packed episode of the show. OUr featured clip is from their chat with this Muppet performer on Sesame Street, perhaps best known for performing Elmo since 2013.

Good For You
Comedian Whitney Cummings interviews guests (friends, comics, celebs, experts, weirdos) every week. Known for her standup comedy specials for HBO and Netflix, Comedy Central Roasts, multiple television series and films, Whitney has a lot of questions for a lot of different kinds of people. She also has opinions. And a robot. Epi57 from November of this year featured guest Meghan Tainor and, in our featured clip she and WHitney strained to remember Milli Vanilli and whatever became of them…with varying degrees of accuracy.

Sam Pancake Presents the Monday Afternoon Movie
Actor/comedian Sam Pancake sits down with friends famous and funny to discuss the surreal, silly and nonetheless star-studded made-for-TV movies of the 1970s. It's a loving look at baffling not-quite-feature-length flicks that often aren't on DVD and have largely been lost to time. IN November of last month Sam welcomed comedian Dave Holmes on to talk about The Night Stalker - not th eTV series but teh 1972 TV movie that served as the pilot for the show starring Darren McGavin which was to follow. It influenced generations of subsequent paranormal-themed TV shows, but does it hold up today? Not so much, says Holmes, who objects to this take on vampire horror being so decidedly unsexy and overstuffed with middle-aged white dudes.

And here we are again, together at the end of the show…wondering what the future will bring. Well, there are more soundcasts out there to listen to and share with you for one thing. If all goes well, COVID-19 will be eradicated, or at the very least manageable, treatable, preventable…rather than what it seems to be which is "inevitable".

It is the Xmas season right now as anyone with an active radio can't avoid noticing…So many holiday tunes out there. Many people don't know this but I actually wrote a Christmas song called "For Christmas" waaaay back in 2014 for a charity Christmas album. It has lyrics but so far only the instrumental has been produced and distributed. It's a long story as to why the lyrics were never recorded… mostly having to do with technical limitations on the part of the producer… er, me. …Well, I guess that isn't really a long story per se. Anyway, the song is still available in the form it currently exists in, and I'll provide a link: https://www.amazon.com/For-Christmas/dp/B00PJUHQJE

I do think it is about time I recorded a version with words… but then everything is about time, isn't it?…ok, maybe not everything. You can also check out the show archive at SuccotashShow.com to find all the episodes throughout the years, presenting what HAS to be around a thousand different soundcasts from various places around the world and the internet as we know (or knew) it. Maybe YOU are in the archive… maybe you will be someday? Who knows? In the meantime we can always use your help in the form of rating and reviewing the show… and also sharing the show. Because sharing is caring… unles it's COVID-19, DON'T SHARE THAT!!…But, sharing US is what we mean when we gently ask: Won't you please…Pass The Succotash?