Saluton and Feliĉa Turkia Semajno! I am Tyson Saner, your every-other-week host for this 230th episode of the soundcast now called Succotash Shut-In. And for those of you who don't speak Esperanto it is "Turkey Week" here in the still somewhat United States of America where at least one turkey is pardoned every Thanksgiving. Right now there are heated debates attempting to establish whether or not this year's turkey can pardon itself. Time will tell on that one…

Last week on Epi229, show creator Marc Hershon brought you another terrific interview with frequent Succotash guest Dana Carvey. That show is still available on all soundcast streaming platforms and, of course, on our webpage over at http://SuccotashShow.com which you may already be visiting and reading this along with listening to it…

Hello. Right now California is going thru a pretty substantial new infection period of COVID-19 and a curfew will be in effect starting, I believe, Saturday the 21st. The Saner households will be having a Thanksgiving Zoom get-together to make up for not being able to visit each other's living spaces. Although this is saddening, we'd rather not play games with our loved ones lives so that we will be more likely to visit them in the future and have other holidays with them for many years.…or maybe this is the new normal.…I suspect VR tech is going to have its time to shine before too long. 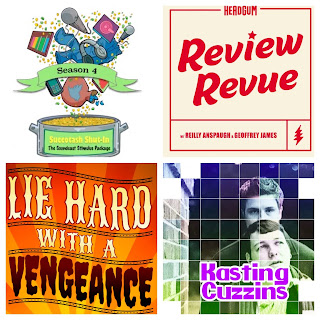 In this episode, I have clips for you from the soundcasts: Lie Hard With A Vengeance, Kasting Cuzzins: A Podcast About Rap… By Two Recovering White Rappers, and Review Revue. I've also got what seems to be the only Thanksgiving-themed ad, Turkey Trousers, from our longtime fake sponsor Henderson's Pants, and selected reading from TrumPoetry.com which is, of course, our 100% fake sponsor with the 100% real website.

Kasting Cuzzins
Our first clip up is from a soundcast called Kastin Cuzzins, which calls itself "A Podcast About Rap… By Two Recovering White Rappers". It's hosted by @KeefHerbin and Alex who were known in hip hop circles as Kissing Cuzzins. Now they have this podcast which they use primarily to take a long, hard look at their own discography. Sharing the stories behind each track, the artists that inspired them, and the logic behind their oft cringe-inducing lyrics. Our clip is from their episode from the first of November - just this month - entitled "The Bullet With Butterfly Wings Effect ("The Heist")", and their are reviewing what they consider "the pinnacle of our rap career, a cartoonish heist track aptly titled -The Heist.'" To aid in the discussion, they are joined by unofficial KC historian Brendan Roney.

Lie Hard With A Vengeance
From this soundcast's homesite: "Two ‘men’. Four lies. Two truths. Why not take a break from the real world and come wrap your ears round this weekly comedy gameshow?" Hosted by Paul Blakeley and Rick Allden, is also a "clean" show as well, meaning it's safe for kids' ears. Also: It's British. So classy, right? I went back to the earliest episode I could find for this clip, which is from September 16, 2018. The episode is called: "Medical Advances and Beards".

Review Revue
This weekly show, hosted by Reilly Anspaugh and Geoffrey James, blends conversation and improv comedy based on the most absurd reviews on the internet. Our clip hails from very recently - November 10th, to be exact - entitled Live, Laugh, Love Artwork with guest Lauren Lapkus. In the episode, they share reviews about Live, Laugh, Love artwork and discuss extreme home makeovers, white elephant gifts, and triplet rivalries.

So there you have it. Another week, another episode. Another year, another Holiday Season. I'm just going to put this out there: The holiday season is really about how we are all supposed to be nice to each other for a few days a year. Like…nice on Thanksgiving, shitty on Black Friday and Nice again on Christmas… on into the new year. I don't personally need the holiday season to tell my loved ones how I feel about them. I tell them all the time because life is short and filled with uncertainties. I relate to the heaviness of showing someone you really care about them by staying the fuck away from them. It's no fun. But, with effort, one day we will theoretically be able to hug each other again…those of us who willingly receive hugs that is…and you can give presents to people any time of the year.

For example, you could give this show the present of a favorable review on Apple or Google Podcsts or Follow us on Stitcher ANY time of the year…as well as telling people to listen to us while providing them with the where and how of it all. Sharing is caring, and being cautions so as to not accidentally share COVID-19 is also caring.

Until next time I'm Tyson Saner for Marc Hershon, Bill Heywatt, Joe Paulino, Scott Carvey and Kenny Durgis, reminding you to wear a mask in public and if you could: Please pass the Succotash!