Saluton! Estas mi, Tyson Saner. Dankon, Bill Heywatt for the lovely introduction. I am your host of this week's edition of Succotash Shut-In: The Soundcast Stimulus Package. It's episode 222 this week.

Last week, Marc Hershon hosted episode 221, "Guestin’ It Up with Pat Kelly & Peter Oldring" and it was a pretty entertaining listen. You can still find it and all of the previous episodes at www.succotashshow.com and of course soundcast streaming services like Apple Podcasts, Stitcher, Laughable, Podbay… just to name a few. 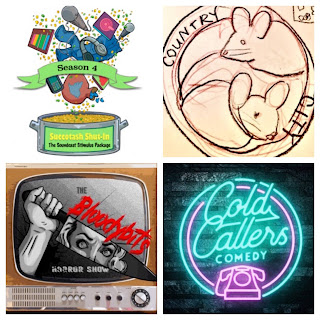 But you are here for this week's show and I do, indeed, have clips for you. I've got clips from City Mouse Country Mouse, The Bloodybits Horror Show, and Cold Callers Comedy. I've also got an advert from our longtime sponsor Henderson's Pants and their just-in-time-for-Autumn Leaf Behind Pants, and a reading from our other regular sponsor TrumPoetry.com.

The Bloodybits Horror Show
Hosted by Eddie "The Axe" Jefferson, The Bloodybits Horror Show is a weekly discussion about all things horror. Movies, Television, Books, Video Games. We cover the history, behind the scenes, and philosophy of it all. This recent clip is from the beginning of September, where the host and sidekick Faustus are discussing what might be David Cronenberg's best work: Videodrome.

And that's where we put a pin in Succotash Shut-In for now. Now all that remains is for you to actually listen to the episode while I do hope we, at the very least,gave you something entertaining to listen to for the last +/- half-an-hour. Please remember to rate and review us on Apple Podcasts or anywhere you can rate and review us to let us know how we did. It's been quiet in the old feedback department lately…

At any rate, Marc Hershon will be back for Epi 223 and who knows what he will have in store for you at that point in the future? I am as curious as you are, I imagine. That's really all I can do …is imagine… if you don't say anything…

But honestly, thank you for listening, be decent to each other, and remember: "Asymptomatic spread" is a real thing so wear a mask in public so you don't inadvertently murder someone close to you OR otherwise. Because, really, you can't count on that sort of thing only affecting a stranger, and in general you should care about them too because misery in the world is already plentiful, so why add to it?

Oh, and remember to PLEASE pass the Succotash.