Last week, in Episode 217, my co-host and show creator Marc Hershon interviewed American stand-up comedian, actor, director, producer, writer and soundcaster Mike Birbiglia. If you haven't heard that episode yet I recommend that you do at your earliest convenience should you also be in the mood to listen to a soundcast episode at that particular moment in your future. 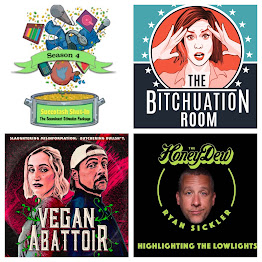 In this episode I've chosen some prime clippage for your listening pleasure. I've got clips from The Honeydew Podcast with Ryan Sickler, The Bitchuation Room, and Vegan Abattoir. This week we're once again sponsored by Henderson's handsome new Ransom Pants, and we have a reading from TrumPoetry.com our other 100% fake sponsor with a 100% real website.

A weekly caucus of progressive comics, activists, and thinkers hosted by Francesca Fiorentini. Our featured clip is from just a few weeks back - August 9th - an episode entitled "Breaking Biden" with guests Marisa Franco of Mijente and comedian Zahra Noorbakhsh.

The HoneyDew with Ryan Sickler

The HoneyDew is a storytelling podcast hosted by comedian Ryan Sickler. Inspired by Ryan's adverse upbringing, the show focuses on highlighting and laughing at the lowlights of life. We're featuring a clip from their episode from August 17th, "Big JOhnson Energy", with guest Sara Weinshenk sharing a story about how she was being prescribed Adderall for ADD…and ended up in a psych ward for 72 hours.

When filmmaker Kevin Smith nearly died from a massive heart attack, his only begotten daughter Harley Quinn Smith convinced him to try a plant-based diet for 2 months. 2 years later and still not dead, the dad asked his daughter to join forces so the two can provide plant-based answers to the Vegan-curious questions they get from a meat-eating and dairy-drinking audience. The clip we're highlighting is from their debut "Going Green" episode from June 26th of this year (that being 2020.)

…and here we all are once more at the end together. I do hope your listening experience was to your liking. Next week, Marc Hershon will have the hosting duties and I will, presumably, still be on the hunt for more soundcasts to clip. It just so happens that I've got two in mind already but you'll need to listen to Epi220 if you want to know what I ultimately decided on.

I greatly appreciate you for taking some of your time to spend time with us here at Succotash Shut-In. You have so many choices after all and we are but one…that also provides you with a few possible alternatives to us. Or, perhaps you prefer only to hear snippets of shows to a longer listening experience and Succotash is the only way you do that. We may never know…unless you go to Apple Podcasts or some other site that allows you to rate and comment on shows…and tell us there…you can also email us at marc@succotashshow.com or call in to our non-toll-free # which the wonderful Bill Heywatt will give during the outro of the show…which is right around the corner.

So, until next time… follow us on social media, Be decent to each other, wear a mask in public to protect yourselves and others, incorporate critical thinking into your daily life, maintain hope, and please…Pass the Succotash!