Saluton, estas mi, Tyson Saner. I'm your host for this and every other episode of Succotash Shut-In, the Soundcast Stimulus Package, for the forseeable future and I welcome you happily into our loving embrace. Last week, Marc Hershon hosted Epi215 and provided you with 4 clips from the soundcasts 2 Dumb 2 Tame with Mia Pinchoff, Lewis Black’s Rantcast, Stop Me If I’ve Heard This with Art Krug and Susan Rice, and Sunday Papers with Greg Fitzsimmons and Mike Gibbons." You can still catch the episode, either on our homesite or on Apple Podcasts, Spotify, Stitcher, YouTube, the @Laughable app, Google Play, iHeart Radio, and more. 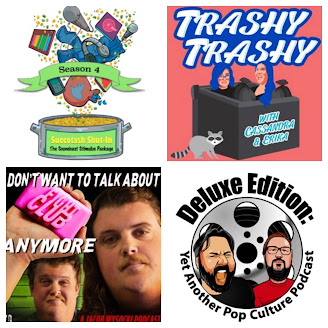 This week, I've got clips from the soundcasts Trashy Trashy, Deluxe Edition: Yet Another Pop Culture Podcast, and I don't want to talk about Fight Club anymore. I've also got an ad from our longtime sponsor Henderson's Pants for their new Spring Breakers line, and from our relatively new sponsor TrumPoetry.com…which is a 100% real website that I will be reading from.

If this is your first time here, I appreciate you making us your choice for your listening experience for the next more or less half an hour. Let's get to the clips!

Deluxe Edition: Yet Another Pop Culture Podcast
Our featured clip from this show, hosted by Bill Sebald and Casey Schearer, comes from July 3rd, 2020: #7 - The Joe Alves Interview. Alves has designed three features for Steven Spielberg, firstly for The Sugarland Express. He designed the three mechanical sharks for the movie Jaws (1975) with mechanical effects man Bob Mattey and he was nominated for the Academy Award for Best Art Direction and won the BAFTA for Best Art Direction for his work on Close Encounters of the Third Kind. (Off the record, he had once selected a screenplay that was co-written by Succotash Shut-In's Marc Hershon to be his directorial debut but the deal never came together…)

I Don't Want To Talk About Fight Club Anymore
A torture endurance podcast where Jacob Wysocki subjects himself to watchthe movie Fight Club for 72 hours straight. Joined by his comedian friends, listen as he documents his descent into madness. Our clip is from 35 hours into the run and Jacob has seen Fight Club 15 times. He is halfway through the marathon. This episode he's joined by Shaun Diston (Wrecked), Kerry O'Neill (The UCB Show), and her dog Frank; together they delve into the exploratory qualities of Jacob's marathon.

Trashy Trashy
A podcast for garbage people. They cover trashy news stories. Hosted by Cassandra Cardenes and Erika Curry, our featured clip is from their Episode 3: "Farm Talk", from just a couple of weeks ago.

…and that's all the content I've got for you this week. I hope you enjoyed the time you spent with us because if you didn't… there's not a bunch I can do about that. I can apologize… show remorse somehow… through my speech into your ears apparently… but who is to say whether or not that is warranted?

We don't get a great deal of feedback anymore here at Succotash Shut-In, formerly called Succotash, The Comedy Soundcast Soundcast, created by Marc Hershon, who will be hosting again next week. I know that I would — and I believe that I can safely state that he would appreciate it — if you left a review on Apple Podcasts or iTunes or wherever else one can leave reviews.

Anyway, if you enjoyed the show why not tell someone else about it with your mouths into their ears? Keep that safe social distance of course… never let it be said that we want you to unnecessarily risk your health for us. So until the week after next this is Tyson Saner saying "Good-Bye", asking you to keep an eye on my YouTube channel for more H.P. Lovecraft-inspired video games along with whatever else I'll be playing and posting, and reminding you to keep the spirit of hope alive in your hearts, be mindful and Please…Pass The Succotash?