Hey there - it's your every-other-weekly host Marc Hershon here with Epi213 of Succotash Shut-In: The Soundcast Stimulus Package. But I am not manning this installment alone — I'm joined by a longtime friend of the show, Jason "Jabs" McNamara, all the way from Canberra, Australia! And this isn't the first time we're done this but it has been a LONG time — Jabs last co-hosted Succotash with me back in Epi40: Down Underin' with Jabs, in November of 2011, the very first year of the show. 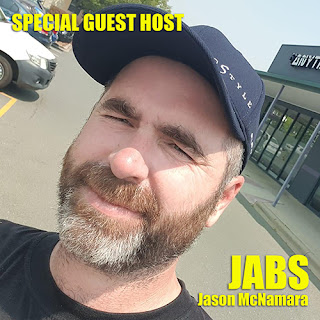 Jabs used to be the ringmaster of a three-headed dog of a soundcast called The Dhead Factor (we talk about that in this episode), a show which has been on a VERY long hiatus. He also produced a comedy narrative soundcast from 2013, a limited series called Boganwood (which you can still catch over on Stitcher.) We also talk more about Boganwood during this episode if you want to find out more.
An avid runner, he's got a great wife and three kids in Canberra, the capital of Australia, where he holds down a day job working at a hospital. We're in farily regular communication so I thought I'd see if he wanted to grab several clips of some Aussie soundcasts and jump on the show to present them with me. Not only did we do it up in audio but, since we were on Zoom, we captured the "magic" (if one could call it that) and — for the first time ever — we will be simulsoundcasting an episode of Succotash! In audio form in all the usual places AND on YouTube!
The shows that Jabs picked out for us to feature clips from this episode include I Don't Know About That, Tony Martin's Sizzletown, The Betoota Weekly News Bulletin, and Unravel True Crime: Snowball. The last one isn't a comedy soundcast clip per se, it's the trailer for a bizarre true crime show that's so bonkers as to be very entertaining. This installment of the show is brought to you by Flying Jodhpurs from Henderson's Pants.
CLIPS
I Don't Know About That
If you've been wondering where Australian-born, American-transplanted, comedian Jim Jeffries has been since his Comedy Central commentary show shut down last year, this is it. He brings his special brand of non-knowledge to I Don't Know About That, where he's challenged by staffers Kelly Blackheart, Forrest Shaw, and Jack Hackett to figure out the ins and outs of various topics, only to then have a real loive authority on those topics come on to set him straight.
Tony Martin's Sizzletown
Aussie comedian Tony Martin is a longtime stable in his native land. Now he's plunged into the world of soundcasts with Sizzletown. Replete with offensive tweets, the frustration of COVID-19 lockdown, and rampant conspiracy theories, Tony is joined by folks like Niles Nyquist, Shane [REDACTED], Simon Haight, and The Pikelet Man — all calling in from their own bunkers.
Unravel True Crime: Snowball
Season 4 of Unravel, a true crime show from ABC in Australia. This is the trailer for a wild show that actually involves the show's host, Ollie Wards, because his brother gets conned by an American woman from California who bulks the family out of  giant sums of money.
The Betoota Weekly News Bulletin
I love the name of this soundcast so much! Hosted by Cadet Wendell Hussey, along with Errol and Clancy, The Betoota Weekly News Bulletin is a showcase of some of "the biggest stories" from The Betoota Advocate, Australia's oldest newspaper. (Jabs tells us that Betoota is actually a ghost town.)
I can't thank Jabs enough for co-hosting this episode with me — especially because we had to record it twice due to my Zoom ineptitude. Will his show, The Dhead Factor return? who's to say? Enjoy him here with me and hope for more.
Co-host Tyson Saner will be on hand with Episode 214 next week. (If you missed it, you can catch his episode 212 from last week here, where he features clips from Sincast, 16oz Cinema, and The Neighborhood Listen.
If you get a chance to get up to Apple Podcasts to rate and review our little soundcast in a favorable manner, you'll be our bestest friend. Or just give us a little word-of-mouth, which we call passing the Succotash.
— Marc Hershon