Welcome to Episode 205 of Succotash Shut-In, the Soundcast Stimulus Package. I’m your every-other-edition host Marc Hershon, switching off with the inimitable Tyson Saner. And we are doing our best during this time of pandemic and – since the most recent installment – extreme civic unrest, to bring you fresh comedy soundcast tidbits every week. 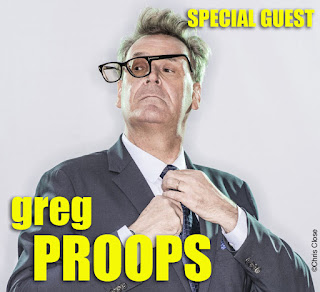 I have a special treat for you this week, departing from playing a sampling of several comedy soundcasts to, instead, bring you a conversation I held via Skype with comedian, writer, raconteur, and friend-of-the-show Greg Proops! You likely know Greg from his years of appearing on TV’s Whose Line Is It Anyway?, both before they added the question mark to the title and afterwards. He’s also been soundcasting for years with his show The Smartest Man in the World, and wrote The Smartest Book in the World in 2015. He’s got a list of TV and movie credits you can check out on IMDB.com as well.

He and I go back a long way, to when we were both with the house improv comedy group at The Punch Line comedy club in San Francisco starting in 1986. We run into each other every couple of years at things like the San Francisco Sketchfest, or Comedy Day in Golden Gate Park. But since the last time we had Greg on the show was a couple of times in 2015 – for a full episode in May of that year and in a minisode I put together during the 4th Annual Los Angeles Podcast Festival in September, it seemed a good time to bring him back.

Like many of the rest of us, Greg has been sequestered at home during the current COVID-19 crisis which, for him, is in Los Angeles. He and his wife, Jennifer Canaga, have been continuing to do episode of The Smartest Man in the World from their "Fortress of Proopitude", and we’ll get into that in this show's discussion. We also talk about what the state of live performing might be like if and when thing open back up more fully, what it’s like to do comedy for audiences via Zoom, and we also talk about our mutual friend Will Durst, who is still recovering from a stroke suffered last fall.

This episode of Succotash Shut-In is sponsored by Henderson’s Pants and their new Peersucker Pants.  And also by Trumpoetry.com.

Before you know it, Epi206 will be here, hosted by Tyson Saner but, in the meantime, if you’d like to email me with any questions you’d like to hear sampled on our show, shoot me a note at marc@SuccotashShow.com. And if you ARE a comedy soundcaster, listen in for details from our booth announcer, Bill Heywatt, on how you can upload a clip directly to us!  So as I get out of here, let me remind you that if you liked the show, please rate and review us on Apple Podcasts and don’t be afraid to pass the Succotash to someone you care about.