As Santa Claus said after a day of delivering toys around the world, "Oy." This Epi78 of Succotash was intended to be our Christmas episode but between the crush of business, holiday shenanigans, a wicked cold and assorted other speed bumps, it's only getting out now. And how was YOUR holiday?

We have a brief chat with Rachel Eaton, the Director of Content Partnership at Stitcher. We start out talking about the nominations for the 2nd Annual Stitcher Awards but they closed the Sunday before Christmas. Fortunately, Rachel also talks about the voting portion of the awards. The finalists to get your votes in each category will be announced on Tuesday, December 31st, after which you can begin voting at the Stitcher site. (I appreciate that Rachel took time out to talk via phone while on vacation visiting family back in Boston!)

We've also got a bunch of clips for you - many of which were harvested by Tyson Saner, our go-to guy and Honorary Associate Producer. He's also one of the three folks who called into the Succotash Hotline and dropped a holiday greeting on our listeners, all of which are featured in this episode. If you'd like to hear more of his melodious tones, I've been chatting with him about co-hosting an episode of Succotash sometime in January.

SONG OF THE SEASON

Our friend, fellow podcaster (Functional Nerds) and novelty songster John Alealio re-released one of his holiday classics, Batman Smells (A Rebuttal), and it's out pleasure to feature it this episode to help us round out our post-Christmas non-stravaganza. Click on John's name to go visit his site and pick up some of his tunage, won't you?

We're featuring not one but TWO of our Burst O' Durst segments this episode, including comedian Will Durst's belated Xmas List for 2013.

Here's the way the movers, shakers, and droppers shaped up this past week:

Amish Baby Machine
This clip was a request I made of Tyson Saner after I read last week’s Top 10 Most Active Show On Stitcher’s Top 100 Comedy Podcast list. The show jumped up over 500 places to get in. So I asked Tyson to grab me a sample. In this taste, hosts Dags and Jeff welcome back Dan Simon, who shares tales from his recent African adventure.

WTF
One of the best known podcasts around is WTF or What The Fuck, with Marc Maron. He recently hit his epi450 and had Will Farrell on as his guest, which I reviewed for This Week In Comedy Podcasts on Splitsider.com. A few weeks earlier, Marc had author David Sedaris on and he’s a favorite of our friend Tyson Saner, who provided us with this clip of Sedaris reading from Marc’s recently published book.  (Marc's IFC TV series Maron returns in May of the new year.) 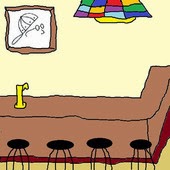 Broadcast Basement
Chris Lanuti runs his show from an actual bar he has in his actual basement, surrounded by actual friends like Acoustic Mike and Wild Bill as well as whomever drops in. Chris is a former radio guy who knows how to run a show and I guess he’s the commissioner of the Broadcast Basement Fantasy Football League in which our Succotash Rocs did okay in this season, considering I know nothing about football other than the fact it’s the brown oblong ball. This clip focuses on that newish Christmas tradition: The Elf On The Shelf.

Seven Days A Geek
The lads over at Seven Days A Geek recently held their “30 Days of Podcasting” event. These guys aren’t just podcasters but they also get into the nuts and bolts of podcasting a lot – well worth subscribing. In this clip, Jay “The Angry Ginger” and Jeremy McBlizzard discuss horror movies including The Human Centipede. 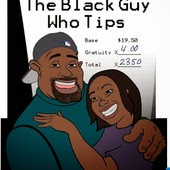 The Black Guy Who Tips
Tyson Saner has clipped us a hunk of a pretty popular show featuring married couple Rod and Karen – no last names – who have been together since they were 16 and got marreid in 2002. They kick stuff around and also have interesting guests. This slice features the couple discussing R.Kelly’s ill-advised Q&A session via Twitter a little while back.

Big & Clever
This podcast out of England has been around for three years and if it hadn’t been brought to my attention by one of our friends on Twitter, I still might have heard about these guys Danny Blaze and Keith True. They’re a pair of DJs and, much like our new friends Trev & Ben, they talk about news of the day, current events, pop culture and enjoy taking shots at each each other every now and then as well.

There you go. A little over an hour of podcast gold. You can help us out for the new year by heading over to iTunes and gives us a nice star rating and perhaps a short review. You can also give us a "Thumbs Up" on Stitcher, Like us on Facebook, give us a heart on SoundCloud or Favorite our tweets when you see 'em on Twitter. You can also help us to offset expenses by clicking on the Donate button on the righthad side of our SuccotashShow.com website, dipping into your Christmas bonus and sending a little smidgen our way. We'll regale you in word and verse on the show.

Best wishes for a great 2014 and we'll talk to you next year!