This is the two-year-iversary month for Succotash! Two whole years. I didn't know it would last this long but then, I didn't know that it wouldn't last this long. If you've been listening the whole time I can't thank you enough. And if you've picked us up somewhere along the way, I thank you as well. 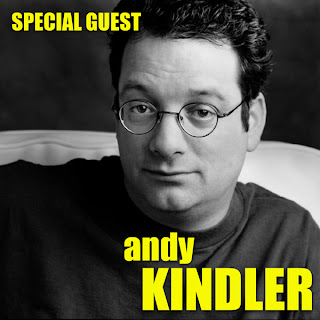 Epi55 is not a big clip show - we've only got four snippets from comedy podcasts - but that's because the majority of the show is my interview with the poster boy for alt comedy Andy Kindler. I would have really enjoyed settling in for a quiet, contemplative, in-depth one-on-one with Andy, but podcasters can't be choosers. Instead, I got a rollicking chatfest over a late night meal at D'Angelo's Italian restaurant, the usual hang for comedians following the Mark Pitta & Friends show at the 142 Throckmorton Theatre in Mill Valley, California.

And it wasn't just Andy and me. We were joined by Mark Pitta, Larry "Bubbles" Brown, and Bob Rubin, all of whom would randomly come and go at our table, cracking wise and telling stories as the occasion warranted. In between, Andy answered a few of my questions, none of which really got into his background so if you're unfamiliar with Andy or why he's regarded so highly among comedians, you may not understand why the flock of comics around our table were drawn there like moths to a flame. We do get into some of Andy's thinking about comedy itself and a bit of his history. So it's safe to say there's something for everyone in here.

Having abandoned my countdown of Stitcher's Top 10 Comedy Podcasts because the top shows rarely change position, here's this week's The 10 Most Active in the Stitcher Top 100 Comedy Podcast List*: 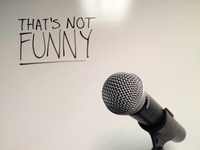 A new campaign over on Kickstarter.com that caught my eye is That's Not Funny, a documentary by filmmaker Mike Celestino. He's talked to some comedians (and wants to talk to a lot more) about subject matter in comedy that rubs some people the wrong way, and why. Succotash kicked him 50 bucks but he's trying to raise $50 THOUSAND to complete the project. (He's already got interviews in the can with funny folks such as Emery Emery, Jackie Kashian, Kyle Kinane, Greg Proops, and Paul Provenza. As of this posting, he's got 30+ days to go but that's going to run out quick. I'll have him on for a quick chat about the film in Epi56 but, in the meantime, click the link or hop over to http://hersh.co/16ntubA and see if you can't help him out.

Our regular check-in by Will Durst has our favorite raging moderate peering over at the US Supreme Court's reason tussle over the marriage equality issue. 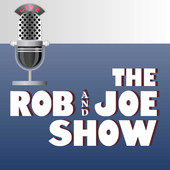 The Rob & Joe Show
We've featured snippet from Rob Maher & Joe Robinson's podcast before. This time it's an indelicate peek into Joe's sexual past. It's not exactly tasteful but, if you're looking for that, there's still terrestrial radio out there for you…

The Random Variety Show Podcast
Another return visitor this episode is Charley Miller and his Random Variety Show. The chunk Charley sent us is a story he created with the help of sentences sent in by listeners.(BTW, I'm slated to be a guest on the RVS podcast sometime this month - I'll give you a heads up and a link when it happens!) 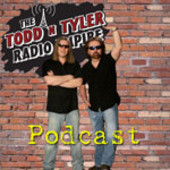 Todd N’ Tyler Radio Empire
The Todd N’ Tyler Radio Empire has been cranking on air since 1993 out of KEZO in Omaha, Nebraska. They’re syndicated on a number of stations, on the internet and their show has – as so many other radio shows have – become podcastted. Even with all that coverage, I am embarrassed to say I have never heard of Todd Brandt and Mike Tyler until I read last episode’s The 10 Most Active in the Stitcher Top 100 Comedy Podcast List. That’s when T-N-T rocketed into the Top 100, landing at #73 and climbing an incredible 306 places in one week. So I just HAD to clip 'em…

The Q Show
Mark Bland sent us a sample of The Q Show which originates from St. Louis, Missouri. The description off the homesite tells us that the show is about "everything and is liberal/moderate radio for people with a brain!" Check out our sample tidbit and see if you qualify.

That's what we've got for you this time around. I'm off on a road trip this week with Dana Carvey and Larry "Bubbles" Brown, during which time we are going to attempt to record enough material for one and maybe even two upcoming episodes. THAT should make it worth passing the Succotash, right?