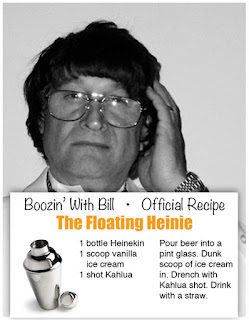 This episode we return to our roots. Clips, clips and more clips. Also, a return to Studio P ("The Home of The Hit!"), engineer-producer Joe Paulino, and another long-awaited installment of Boozin' With Bill featuring our booth announcer Bill Haywatt.

Bill's concoctions are usually something he picked up during one of the many radio gigs he's had over the past 70 years. Often scrounged from either a hard-drinking co-worker or from one of the numerous dive bars that could be found in the neighborhoods that usually spring up around radio stations and recording studios.

This time around he presents us with the very first alcoholic mixture he can first remember making while still a lad at the tender age of 14. During the show he dubbed it "The Beer Float" but given the beer required for this one, I call it "The Floating Heinie". Either way it's a twist on that soda fountain favorite, the root beer float.

Once again, very little movement in the Top 10 of Stitcher's Comedy Podcast chart this last week. In fact, this week, other than the fact two shows switched places in the Top 10, nothing’s gone on.

In "This Week In Comedy Podcasts" on Splitsider.com I reviewed Penn's Sunday School with Penn Jillette and guest Peter "Herman's Hermits" Noone! It went a little something - no, exactly - like this:

Ah, Penn Jillette. Magician, conman, truth-sayer, provocateur and atheist. It’s the last of those that drives many of the discussions around Penn’s Sunday School, although in the latest installment, none of that comes around until after the first hour, during which time Peter Noone (of Herman’s Hermits fame) is Jillette’s guest. And Noone turns out to be a treasure trove of fantastic stories from the early days of the British Invasion and beyond. The child TV star (from BBC’s Coronation) had turned to music and was playing at the age of 16 while hanging around the Beatles before they took off. He tells of John Lennon knocking out five blokes in a working man’s bar and of meeting and hanging out with Elvis in Hawaii a few years later. Jillette punctuates Noone’s tales with his trademark hoarse guffaw. Later in the show, after Noone has left, the host shares how his own atheist beliefs have been picked up by his young daughter and how that causes a bit of a problem with a god-fearing boy in her school, about which Jillette is a little leery about dealing with. Jillette’s shows tend to run over an hour, and each extra minute is well worth the listen.

So you can get the complete flavor of it, I clip that show in this very episode.

This week our on-call Raging Moderate Will Durst turns his acerbic funny beam on the Civil Ware brewing in the Republican't party for our Burst O' Durst. 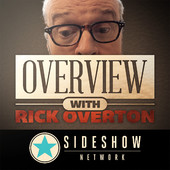 Our first clip is from new podcast, Overview, by a friend of Succotash and a good buddy of mine: Rick Overton! (He was one of our earliest guests – you can find my interview with him in Epi 6 AND I also released a bonus Epi 6.5, which was my interview with Rick in its entirety.) Now he’s got his own show going. And he’s already had some great guests from the world of comedy. Recently he spoke with comedy legend Jonathan Winters – what a score! It struck me that some of what Jonathan is talking about in our clip, where he’s talking about starting out as a comic, relates directly across to podcasting in many ways.

Although this IS a new podcast, the host will be familiar to some of you Succotashians. It’s Caleb Bacon who, until a couple of months ago, was the host of The Gentlemen’s Club podcast. With this new show, Bacon gets pretty heavy in the first show, as his guest is “Bald Bryan” Bishop, who is a producer and sidekick on the Adam Carolla Show as well as the co-host of his own podcast called The Film Vault. Four years ago, at the age of 30, Bryan was diagnosed with inoperable brain cancer. He’s still around, so not only has he survived it, but it’s given him some perspectives on life a 30 year old doesn’t often have.

Penn Jillette, best know for being one-half of Penn & Teller, does a number of things as well, including this podcast. Jillette has become somewhat well know for being an atheist – he doesn’t believe in god – and he often goes into the topic on his podcast. But he also has guests come through and the subject of religion never comes up. Recently he had Peter Noone on the show, the founding member of Herman’s Hermits.

From the show’s intro I know that host Nick Dressel is a student at MSU in East Lansing, Michigan, and the premise for Nobodies is that he and all of his guest are “nobodies” – they are actors and comedians and other flavors of performance who have not “arrived” yet but hope to someday, so Nick sees his show as being the first place you will have heard his guests, but not the last. In Epi35 of Nobodies, his guests Spencer Perrenoud and Jason Carlen gather ‘round a rendering of “McConaughey”.

Here’s one of the only clips from a show we’ve heard from before – it’s Snitch & Lins from Australia! I like the fact that this is a sketch more than anything. I think if I have to hear more people going off on a pop culture riff on their podcasts, I’ll throw up. So thanks, Stitch & Lins!

When I heard from Cam of the 3 Pleasant Gentlemen podcast, I was informed that there  are only TWO Gentlemen in the cast - Cam and Remo. The third Gentleman is a woman, who goes by the name Savy. I also discovered that I’m not alone in finding out that a car makes for a suitable substitute podcasting facility. (While we often have luxurious Studio P, The Home of The Hit!, at our disposal, some episodes of Succotash come to you via Studio F, my Fiat.) 3 Pleasant Gentlemen orginates from the roomy interior of a Chevy Tahoe. 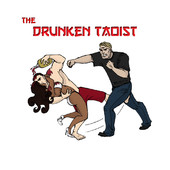 I think I’m going to be enjoying the Drunken Taoist, a bi-monthly podcast hosted by Daniele Bolelli. He’s got quite a colorful collection of stuff next to his name. He’s a writer, a martial artist, and a college professor. His teaching style’s described as “half standup comedian and half Zen master.” Bolelli’s guest from the episode we clipped is New York Times Best Selling author Christopher Ryan, who co-wrote Sex At Dawn and has his own podcast called Tangentially Speaking.

Unlike The Drunken Taoist, our next podcast has precious little on about the podcast or the people on it, even though they have a half dozen places on the web where you grab their episodes. I can’t even find names for the voices you’re hearing in this clip from the Dirty Kong Podcast.

We have a clip from another new podcast – only 6 epis in – called OK Hypothetical and it was submitted by Garin, one of the two hosts. The other fellow is Connor. I like these guys. Here’s the text from their email: “Good morning, The attached clip is actually the full first episode of our show. Run time is 4 minutes 33. Thank you for your consideration. Garin and Connor”. Straight to the point. No nonsense. Get in, get out, no one gets hurt. I love that their show’s title is most of what you need to know about how the show goes.

So there you go - back to a clips royale with this episode! If you're a comedy podcaster, remember that you are welcome to submit a 3-5 minute MP3 clip from your show, via email, to clips@SuccotashShow.com. (While we may well get around to your podcast, there are THOUSANDS of shows out there on the comedy side of podcasting, so you stand a better chance of having us feature you if you are proactive and shoot us a clip yourself!

Until next time, won't you please pass the Succotash?