Here at Succotash I'm celebrating the FIFTIETH episode! In some ways it’s hard to believe we actually have gotten to 50 shows. (On the other hand, given that we started 22 months ago, this SHOULD be episode 96.)  But it’s been tough to get consistent. Between my day job, time at Studio P ("The Home Of The Hit!") and other elements, it’s been hard to crank out a show a week.

BUT we’re finally there, more or less!

If you’re new to Succotash, the reason it’s called “The Comedy Podcast Podcast” is that we usually feature between 10 and 12 comedy podcast clips from around the world. We also have interviews with podcasters, comedians and other sundry show biz folks. This week being our special Epi50, I’m  featuring the interview I had last week with the cast of Superego, who were up from Los Angeles to be part of the 12th Annual San Francisco Sketchfest.

It was part lucky happenstance and part perfect storm, my getting the opportunity to sit down with the guys from Superego: Matt Gourley, Jeremy Carter, and Mark McConville. I've been trying to coordinate a sit-down with them for over a year. So when they were booked to return to Sketchfest this year in San Francisco, we saw our opportunity to pull it together.

The great thing about having these guys as the focus for our 50th episode is that Succotash is not just a showcase for comedy podcasts but it also a celebration of the medium. And Superego really represents a certain measure of podcast success. These guys aren’t getting rich off of their show – not yet – but it’s a show that didn’t exist WITHOUT podcasting. Superego – as they talk about in our interview – starts as improv but comes together through careful editing and post-production. So, although they’ve learned how to re-create what they do in a live setting, the show is, first and foremost, a podcast.

Now in their third season, they're gaining in popularity and opportunity and I beg your indulgence, as listeners, in having our format step away from playing a bunch of clips this episode in order to enjoy this interview with Superego.

The shows in Stitcher's Top Ten Comedy Podcasts this week have either got a lot of loyal listeners or else there are a lot of new people just checking out these particular shows. Only ONE out of the Top 10 were not up there last week.

Got a letter from a friend, James Mogavero, who sent a link to me, Eddie Pepitone, Rick Overton, Jimmy Dore, Lee Camp, David Feldman, and Carlos Alazraqui. It’s to Podcasting Community Faces Patent Troll Threat; EFF Wants to Help,a story about podcasters getting threatening letters from attorneys representing a company called Personal Audio that claims to hold the patent on "apparatus for disseminating a series of episodes represented by media files via the Internet as said episodes become available". Patent trolling is a despicable, money-grubbing practice and now it's bein gused to try to grub money from a "business' where most of us can barely afford the microphones into which we talk. 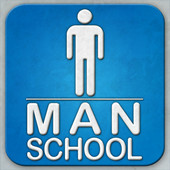 On Splitsider.com, for This Week In Comedy Podcasts, I review Caleb Bacon's new show Man School. Caleb ran 154 episodes of The Gentlemen's Club podcast but shut it down at the end of last year and decided to shift gears. The premiere episode features his chat with "Bald Bryan" Bishop, a producer and sidekick on Adam Carolla's show as well as the co-host of The Film Vault podcast. And they focus on Bryan's facing brain cancer at the age of 30. Now, four years after the diagnosis, he talks about how his life is different.

The only clips featured on this week show are a couple from the most recent Superego episode to highlight the group's sound and rhythms. You can find all three seasons of the show by Gourley, Carter, and McConville (as well as their amazing slate of guest performers) at http://GoSuperego.com.

We DO have our usual segment, our Burst O' Durst with raging moderate and political comedian Will Durst. So be sure to listen all the way to the end to your dessert.

As part of my observance of our 50th episode of Succotash, I want to thank all of the podcasters who generously allow us to use their clips each week. (Sure, it’s free plugs for them, but they’re also putting their trust in us that we’re going to do right by ‘em.) I also want to thank all of the folks who have given of their time and let me interview them for the show. But most importantly, I want to thank you guys, our listeners, for passing the Succotash. Whether you’re a first time Succotashian or have been with us for all 50 episodes since we started almost 2 years ago, it means a lot to me that you’re out there.

Which reminds me: if there’s a favorite comedy podcast YOU listen to but haven’t heard us feature on the show, drop me a line to marc@SuccotashShow.com. You can also call into our Succotash Hotline and leave us a message – that number is (818) 921-7212. And if you ARE a comedy podcaster and would like us to feature a clip from your show, you can send us a 3-5 minute MP3 clip to clips@SuccotashShow.com.

As I say on the show, you can Like us on Facebook, rate and review us on iTunes, thumbs up us on Stitcher and retweet us @SuccotashShow!

Here's to passing the Succotash for another 50 episodes!