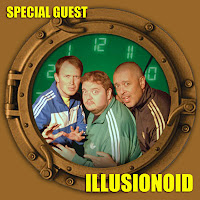 I’m very excited about today’s show. I’m usually excited about every epi, but sometimes I’m more excited than other times and this is one of those more excited times. Our special guests are Paul Bates, Lee Smart, and Nug Nahrgang – the cast of Illusionoid, one of my favorite podcasts.

One of the most interesting things about Illusionoid is that it is a highly improvised show, built within a framework that makes it seem like each episode is an integral story within a structured whole. Maybe that's where the "illusion" part of the name comes from - I didn't think to ask. We DO get into the nuts and bolts of how the show gets put together - performance, music, sound effects - as well as how the three guys met up and how the show got started.

I play a snippet of a recent Illusionoid episode after the interview, one that was inspired by part of our conversation just before the guys were going into the studio to record the show. You really should hear more and you can do it at http://Illusionoid.com, as well as on iTunes and Stitcher Smart Radio.

Here's the latest Top 10 Comedy Podcast countdown from Stitcher Smart Radio. There are a couple of new entries this week but not a whole lot of action - no movement at all amongst the top eight shows from last week's numbers.

There's our Burst O' Durst, with comedian Will Durst talking about Girls (HBO) creator Lena Dunham and her amazing display of tattoos that joined her at the recent Golden Globes awards. I read a letter from Louis CK. And we have a song from Bonn and Obo. 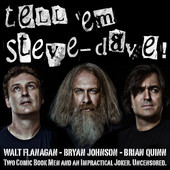 SModcast: Tell ‘Em, Steve-Dave
Featuring Brian Quinn, Bryan Johnson & Walt Flanagan, Tell 'Em, Steve-Dave is billed as “Two Comic Book Men and An Impractical Joker. Uncensored.” The origin of the title is from a comic store that Kevin Smith and Walt Flanagan used to go to, run by a guy who they could never remember if his name was Steve or Dave. So he became Steve-Dave. Our clip has part of their regular segments called "Fat News".

The Church Of What's Happening Now
Some people may be old enough to remember that the title of Joey Diaz’ podcast came from a character that late comedian Flip Wilson did, the Reverend Leroy, and it was the name of his church. Joey’s a truth-to-power kind of guy who also seems heavily fueled by edible forms of marijuana. But he used to be into heavier stuff, as evidenced by the story he tells in our sample of the show. 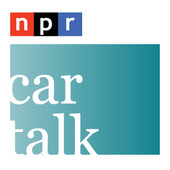 NPR: Car Talk Podcast
Did you know that NPR's Car Talk radio show, featuring the beloved Click and Clack (AKA Tom and Ray Magliozzi) is also Top 10 podcast? You can tell it's new to podcasting and a to a whole new audience because otherwise listeners would know that Car Talk - around for 35 years - stopped producing new shows last October! What you’re hearing are old reruns of people calling in to ask Click and Clack about their old broken down cars.

Sloppy Seconds
The official blurb for Sloppy Seconds reads: “San Francisco comedian Howard Stone and co-host Tom Sawyer discuss current events in this fast paced comedy talk show with music.” What it neglects to say is that Tom Sawyer has been a fixture in the San Francisco comedy scene for 30 years as the owner of Cobb’s Comedy Club. And he’s got as many opinions as he had comedians cross the Cobb’s stage. Their guest this episode is Bay Area comedian Johnny Steele, who has an opinion or two himself. 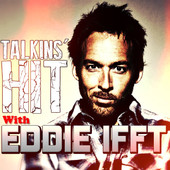 TalkS Hit with Eddie Ifft
Here’s a podcast that’s known by slightly different titles depending where you look for it. On its homesite, it’s Talking Shit with Jim Jefferies and Eddie Ifft. Or sometimes just Talking Shit with Eddie Ifft. Or Jim And Eddie Talk Shit. On iTunes, to get past the censorship on titles, it’s called TalkS Hit with Eddie Ifft. Whatever you call it, it has just passed 200 episodes, so something’s working. I will warn you that this show is NOT for the meek. This particular episode they have comedian Greg Wilson dropping by and the stories are, quite frankly, a little rough. Definitely NSFW. But there’s a crude hilarity and sense of fun…up until the moment Eddie shits his pants. Yes, that's right. Say no more.

The DC AM
AM is the host of The DC AM which is in Washington, DC. In a most recent epsiode, AM and a friend – the podcast homesite is very devoid of names – ventured to the Music And Gaming Festival (or MAGFest) in search of costumed weirdos running amok in our nation’s capitol. In the clip we have, they’ve cornered a dude dressed like Encio from the Assassion’s Creed video games. 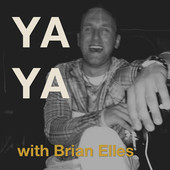 Brian Elles hosts a man-on-the-street type of show in Chicago called Ya Ya in conjunction with Peaches and Hot Sauce Productions. (I think I mispronounce the title of the show during the podcast - it's not "yah-yah" but more "yeh-yeh" - guest I'm not street enough to get those nuances…) In this clip that came right out of our TweetSack, Brian has Greg Gilenna (creator and writer of Meet The Parents) as his guest, who reveals the origins of the movie was a two-minute comedy sketch.

There aren't THAT many clips in today's show but, with the Illusionoid interview, this is one of the longer episodes of Succotash we've done. Even so, I still managed to tack on a bonus succotash recipe at the very end, after Bill Haywatt signs off.