Happy holiday season to you! Hope yours is shaping up well. I normally don't plug our wares in the blog too much BUT in case you feel like passing the Succotash for the holidays, now would be a good time to hop up to our Succotashery and get friends, loved ones, or just yourself some nifty Succotash t-shirts, mugs, and other assorted stuff. 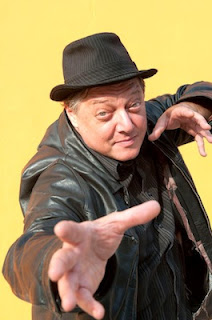 This epi brings us a special guest, Chris Bonno, in a special two-part interview but in a single show. See, I started the interview live, face-to-face, when Chris was up in San Francisco as the feature act for Hal Sparks, who I also interviewed. (Catch THAT chat back in Epi41!) But we only got about 8 minutes in when things got busy and we never got a chance to finish. Until a few days ago, when I caught up with Chris in LA via Skype and we picked up right where we left off.

Chris is a comedian, an improvisor, a musician, an artist and a podcaster. A VIDEO podcaster, no less, and we will talk about his Electric Bonnoland show during the course of the interview. He's also a guy I've known for about a decade and a half, one of those "comic's comics" who everyone in the comedy scene in LA and Austin, where he got started, knows well but the public is still waiting for him to become an "overnight success".

How Did This Get Made?
A consistently awesome bad movie podcast — that is, a podcast about bad movies — HDTGM? is hosted by Paul Scheer along with Jason Mantzoukas and June Diane Raphael. They have always done feature films on the show but in their Episode 51 they tackle their first TV movie, Liz And Dick, the recent abomination starring the abomination known as Lindsay Lohan. (I give these guys the full review treatment on in This Week In Comedy Podcasts on Splitsider.com, so check that out, too!) 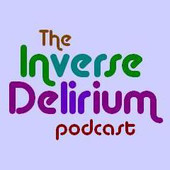 Inverse Delirium
This podcast hails from Baltimore (or Smalltimore, as host Geoffrey Welchman proclaims it.) Geoffrey’s put a lot of effort into his sound quality and he’s got a great pro announcery voice, which you don't find a lot of in podcasting. In this clip, Geoffrey got guest comic-impressionist Kevin Pollak to star in a sketch he wrote.

Larcher And Lorensen
Chicago boys Al Larcher and Clark Lorensen host a sports-and-comedy-based podcast called, rightly enough, Larcher And Lorensen. They’re also part of a comedy troupe in Chi-town called Comedy Accident and, in the clip they sent us, they were visited by a couple of guys from the group.

Ragtime
This is a comedy podcast in the vein of movie reviews as well as news about films. It stars Schwood and Suds. (I know that Schwood is actually Chris Sherwood but I have no intel on the identity of Suds. Doesn’t matter…) In a clip from their epi 15 — just in time for the holidays — it’s their Gift Guide for Celebrities!

Oddcast Podcast
Succotash gets a lot of love and support from Adam Barker, the brains behind the Oddcast Podcast in the UK (which is also part of Adam's Pod Gods Network.) Adam and his crew did a Very Special Christmas episode which a clip from can only partially do justice to — it’s basically their version of a Christmas Carol, where Adam is taken to visit the past, present, and future of his own podcast.

Burst O' Durst
Veering a little off of politics (although they're in here, too), our Ambassador to the Middle, Will Durst, reveals his Top 10 Comedic New Stories of 2012. Enjoy!

In addition to the basket o' clips we have this epi, there are a few other treats… 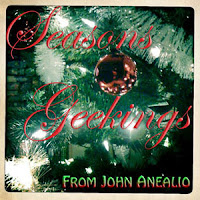 Friend-of-Succotash and past guest John Anealio provides us with a new holiday tune: Batman Smells (A Rebuttal) off of his new seasonal EP Seasons Geekings — and he's making the download of that 4-song EP FREE if you hop over to his website, http://JohnAnealio.com!

We've also got a holiday greeting from the Bonn And Obo (Bonnandobo) Show, a show that we have yet to play an actual clip from but we will as soon as they say they're ready.

I've been enjoying a video series on YouTube by Joe Plummer's Gotta Kid To Feed Productions, Real Actors Read Yelp Reviews. It's not a podcast but it's such a clever and funny idea I wanted to share it with you Succotashians. In installment #11, actor Darren Goldstein (Damages, Limitless) reads a 5-star Yelp review for a place called Schnitzel Queen. Click over to watch the performance, it's even tastier.

That's pretty much everything we've got in store for you in Epi43. Have a good time, don't let the holidays make you too nuts, and please remember to pass the Succotash!