Getting very excited as the holiday season looms. Not so much for Hanukkah or Christmas, but for Succotash Day! It's coming up on Tuesday, December 4th, and it's all thanks to Jabs, the main man at The DHead Factor podcast in Australia. (We talked about it when he was my special guest co-host in Epi40, if you missed it…) Given our production schedule, this show — Epi41 — is about as close as we're going to get to celebrating it on the air (on the pod?), although we might surprise you. Click over to Jabs' show on the day and find out which other podcasts will be talking about us — and we'd appreciate any ratings, reviews and other kudos that you might want to foist upon us up at iTunes, Stitcher and anywhere else Succotash is heard. 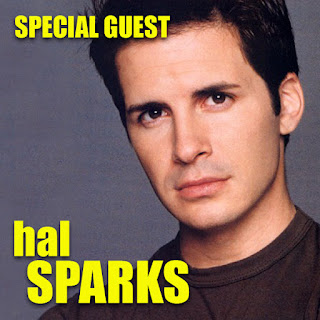 Getting on with this show, I've got my interview with Special Guest Hal Sparks. As I already apologize to Hal in the epi, I recorded our chat two months ago, when he was doing a couple of shows at Yoshi's in San Francisco. I would have gotten this up earlier but…it's Succotash. One of these days we'll actually get everything together on time. But Hal was a terrific interview and, what's more, it was a real treat to see him live. As long as I've been in the comedy world, our paths have never crossed and I've only seen him on TV, in the movies, heard his voicework…but never seen him on stage. check out his homesite for his live appearances and radio shows!

DO IT FOR THE KIDS!

I also have a chat via Skype with Ethan Dettenmaier, host of Combat Radio, about his upcoming 2nd Annual Christmas Breakfast for Homeless Children. That's happening on Saturday, December 8th, at the Salt Creek Grille in Valencia, CA. It was nice to connect with Ethan live after playing a few of his clips on the show, and to hear about this great cause he's putting together to bring Christmas morning to some kids who might otherwise be having nothing but pain this year for the holidays.

As mentioned on this podcast, I got the opportunity to have an informal get-together (AKA beers) with two members of the still-coagulating Pod Mafia. Ed Wallick of Don't Quit Your Daycast and Tom Bevis, host of Destination Asphyxiation, met up with me in San Francisco over the Thanksgiving weekend and we chatted about all things podcasty. Great to see those guys and be sure to check out their shows.

JUST IN TIME FOR THE HOLIDAYS!

If you're looking to do some cyber Christmas shopping this year and Amazon is your destination, you can help put a little something in the ol' Succotash stocking by clicking on our Amazon carousel at the bottom of our homesite to get there. That way, Amazon shaves off a tiny bit of whatever you spend with them and kicks it back to us. On the other hand, browing through our Succotashery might be just the thing if you're looking for some of our lovely merch to make this holiday season bright!

Besides the two interviews in Epi41, we even had room for a few clips. Here's what you'll hear on the show this time around:

Ratchet & The Geek
Over on Splitsider.com in the This Week in Comedy Podcasts column, I’m reviewing Ratchet & The Geek with Luvvie Ajayi and Scott Hanselman. They’ve only put up their 3rd show but they already have over 10,000 downloads. Luvvie runs a highly read comedy blog and Scott's digital nerdiness spreads out in a blog and two other podcasts about tech. It’s entertaining chat, blending gadget talk with current events – their homesite calls it “The Intersection of social media, pop culture and technology.”

That it for Epi41. Next show I will have Special Guest Host That Chris Gore from the PodCRASH podcast with me, pulling clips and kicking back in San Francisco.

Happy Succotash Day (December 4th), everybody! What a great day to pass the Succotash!