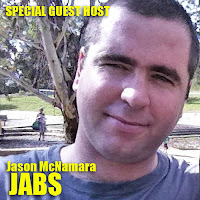 We've got a bunch of clips in Epi40, the longest episode of Succotash yet! Yes, I said "we", because I'm joined by special guest co-host Jabs (aka Jason McNamara) all the way from Canberra, Australia, through the magic of Skype. Jabs is the main man behind The DHead Factor and invited me to share the hosting duties several months ago on his show, so I figured it was high time to return the favor. Wasn't sure how it was going to come together, given the time difference, but Jabs is on holiday down under so he was kindly enough to give up part of a Monday morning at his end.

He really serves as a true co-host in this installment - I didn't really get a chance to interview him about his podcast or his life or anything. So if you're hoping to learn more about Jabs the man, please click right over to his podcast and start filling your ears. We split the job of pulling clips for this show, which allowed us to surprise each other with new discoveries. (And since we both enjoy yakking so much, the running time on this episode is over an hour and a half.)

It was great having Jabs on the show, and that's not just because he's announced that he's proclaimed December 4th to be Succotash Day! That's right - an international observance of this very podcast! We chat about it during the episode and you can be SURE I'll be talking more about it as the blessed event approaches.

In the previous episode with my interview with Andy Bumatai, I offered to give away an old t-shirt of Andy's from the Crack Up Thursdayz one nighter comedy gig in Hawaii to someone who could tell me the distance in miles between San Francisco and Honolulu. I had a number of people email in with the mileage — 2387 — and then randomly drew Esben Borsting's name from the correct entries. So I'll be sending the t-shirt his way...back to Honolulu. Thanks to everyone who entered.

Maybe I don't talk about myself enough on THIS show but I can't shut up about me when I guest on Epi126 of the Functional Nerds podcast. Hosts John Anealio (who was a guest on Succotash back in Epi33) and Patrick Hester made me feel welcome and the time flew by. At least for me. Might be different for you. Click over and give a listen...

Alba Lewis and Thomas Moore of The Brit & The American podcast swept through San Francisco on a roundabout journey to Peru, stopping just long enough to tuck into a Chinese dinner and have some good conversation with yours truly. Thanks for the eats, kids, bon voyage, and I'll be putting up some or all of our chat in the near future.

Let's do this thing…

The DHead Factor
The usual haunt for our guest co-host Jabs, The DHead Factor is also occasionally co-manned by #FUJosh and others, all the way from Canberra, Australia. Random news, lively chat, and more.

Royal & Doodall
In a classic R&D clip chosen by Jabs, Royal & Doodall pull off a dramatic send-up in which they pay homage/skewer a number of their fellow podcasters. Including US. Check it.

This Week With Larry Miller
Comedian Larry Miller suffered a head injury about a year ago and his podcast over on Adam Carolla’s ACE Broadcasting System has been playing reruns ever since. Larry's been on the mend and fronts a recent repeat episode with this message to his fans…

The Christopher Titus Podcast
I've always enjoyed the rambunctious energy of comic Christopher Titus – even more so now that the sound quality of his podcast is coming together. This episode's a treat, seeing as it also features freind-of-Succotash Kelly Carlin.

Pissed Off Man
Jabs has brought along a clip from a podcast that's a favorite of both of ours - The Pissed Off Man, featuring Gavin, aka Gee from Belfast's Gee & Jay Show. Here our mate's gotten all pissy about eating our at restaurants. Not because of the food. Because of the people.

Garagecast
Is anybody as incensed about the Red Dawn remake as Jake and Bryan? I don't think so. Give a listen to the Garagecast podcast, why don't you? 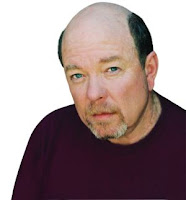 Good things DO come to those who wait! Years ago, living in Northern California, my only reliable access to Phil Hendrie’s KFI radio show out of Los Angeles was the occasional CDs of the show my friend Matt would send me. And any time I was in the southland, I’d gobble up as much Hendrie as my ears would hold. Hendrie created some of the most original and hilarious programming to be found on radio. NOW he’s making hours and hours of past moments available via his daily podcast. Dr. Jim Sadler’s his guest in this epi, and he’s giving hints on how to get people to move along that are blocking your way in the fast lane on the freeway. “Get right up on their bumper and highbeam ‘em!” urges the doc. “Nobody ever gets mad. In fact, they appreciate you letting them know they’re going too slow.” And if that pokey driver ahead of you is handicapped? “Four short blasts of the horn lets them know you’re back there,” adds Sadler. No one messes with me – I was an all-star wrestler and one look of my well-muscled arm resting on the windowtells folks I mean business.” The people who call into the show are increasingly outraged the more outlanding Sadler gets and even Hendrie cautions him about going to far. Spoiler Alert: Hendrie IS Dr. Jim. And he’s even one of the outraged callers. But the other callers often don’t get the gag…and neither will you until you hear a few episodes and get hip to Hendrie.

Mental Poison
Bill and the rest of the East Coast crew of Mental Poison made it safely through Hurricane Sandy a couple of weeks ago. Now they just need to survive more fantastically lame-brained marketing ideas from Brian…

The Bugle
This clip is a slice of the well-crafted and droll wrap-up of the USA’s presidential election, seen through the British filter provided by hosts John Oliver and Andy Zaltzman. We've played a few clips from The Bugle before, and we'll continue to play samples of this great show until you finally relent and subscribe to it! 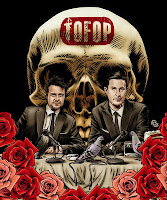 TOFOP
Thirty Odd Feet Of Podcast is a show I've not heard before, although I did catch a few minutes of co-host Wil Anderson at last month's first ever Los Angeles Podcast Festival. Highly recommended by Jabs, Wil's an Aussie stand-up who's at the top of the pile, while his partner-in-podcasting Charlie Clausen just landed a TV gig that's put their show on hiatus.

Unkempt
Does a podcaster shit in the woods? The last time we featured a clip from Unkempt, one of them had, and left it wrapped in a groddy towel. Let's see what Mike & Matt have in store this time around…

Burst O’ Durst
Our political correspondent Will Durst takes a side trip into Thanksgiving Town.

Happy Thanksgiving to our American audience - that would be Happy Thursday to the rest of you. And what an appropriate time for me to urge you to please pass the Succotash!