I’ve really fallen behind in getting Succotash episodes out the door so apologies to those of you who have been trained by decades of televison and radio with their regular release of content. I’d love to be more on top of the release schedule but I have a regular fulltime gig which, if I were just sitting here with an open mic and spitballing witty bon mots off of today’s headlines, I could probably pull it off. But on this show I try to bring you snippets and bits from comedy podcasts around the interwebs and around the world and that just plain takes time. 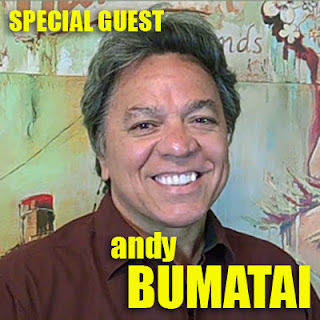 So Epi38 is a clipless show BUT I do have a great interview with one of my favorite comedians. Andy Bumatai is from Hawaii and is IN Hawaii and made his name there as well. He gets to the mainland from time to time, which is how I first got to know him. We get into that story in the interview. I recorded my chat with Andy when I was in Honolulu back in September and I was hoping to have it up before now, because it’s got some plugs for a show Andy and some other bruddas from the islands did in the Bay Area and Southern California at the end of October. I was hoping to spread the word but it’s like my whole show is on island time of something.

Anyway, you can see Andy regularly now on YouTube with his series In The Car with Andy Bumatai. (Note: Andy's show hit the web a good half year or so before Jerry Seinfeld’s Comedians In Cars Getting Coffee debuted online.) We talk about not just this current project of Andy’s but touch on many of the other shows he’s done over the years that helped to make him as much about Hawaii as pineapple, poi and pupu platters. 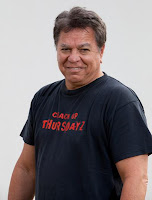 Speaking of pupus, that’s one of the things mentioned on a t-shirt I’m giving away this episode! Seriously. It’s an artifact of Andy’s – a genuine black tee from a long-defunct live comedy show called Crack Up Thursdayz. The show was at Honolulu's East Side Bar & Grill. I even have a picture here of Andy wearing it. Bear in mind I have ONE, it’s a large and it’s well-worn. But it’s also been well-laundered – Andy left it in my rental car when I drove him to a show when I was in Hawaii in September. Wanna win this timeworn classic? Here's how.

Send the number of miles (or kilometers for our metric friends) between San Francisco and Honolulu to me, marc@SuccotashShow.com. I'll draw one name from the correct guesses and mail the winner the Crack Up Thursdayz tee shirt. Be sure to include a mailing address with your emailed entry!

I was going to do a show around the 8th Annual Podcast Awards, which the voting on closes November 15th. Perfect self-contained show idea, right? I thought I’d feature clips from the ten shows in the Comedy category but, again, no time. In lieu of playing those clips, here are the shows nominated:

Beauty and Da Beast, Citizen Radio, Comedy Bang Bang, File Under Horrible, Metrobuzz, My Brother My Brother and Me, The Green Light Show, The Ramen Noodle, Walking The Room, and WTF with Marc Maron.

So get up to http://podcastawards.com and vote before November 15th. (There are a bunch of other shows in other categories as well, but we really don’t care about them here on Succotash, the COMEDY Podcast Podcast.)

With the elections upon us, don't forget that our inhouse political comedian and Ambassador to the Middle Will Durst has an ebook out! It’s called Elect to Laugh, a collection of his election year rants and observations, both from his act and from the syndicated column he does. You may even see a few familiar passages that you’d have heard right here on our Burst O’ Durst feature. Get over to Will’s site and grab it there.

Early Warning: I'll be a guest on the Functional Nerds podcast next Tuesday night, November 13th, hosted by friend-of-Succotash John Anealio and Patrick Hester. Catch it at 10 PM EST/7 PM PST at http://FunctionalNerds.com or download it later from iTunes!

Next episode not only we'll we have a full rack of clips, but I should be joined by special guest co-host Jabs from The DHead Factor podcast, Skypecasting with me from Australia!

That's it for now. Until next we meet, please be sure to pass the Succotash!