Succotash is legal! Well, at least we've turned 21, as in episode 21. Now that our podcast is officially an adult, we intend to stay out late, stop listening to our parents, and vote for whatever candidate spends the most money on TV commercials.

I'm continuing the campaign we kicked off last episode, the Save Our Hard Drive Drive. In an effort to stir more emotions about donating money to our efforts to retrieve some unproduced interviews off of my broken external hard drive, I feature a quick Skype conversation with comedian/writer/podcaster Ed Crasnick, who is the subject of one of the lost interviews. 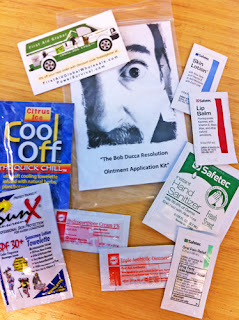 Here's the picture that I promised I'd include during this podcast - it's the contents of the "Bob Ducca Resolution Ointment Application Kit" that I discovered included in a shipment I'd ordered from First Aid Global in Tarzana. Considered that image of my eyeball is from my @hershco Twitter avatar, I have to assume that Todd West, GM of the company and whose card was included in the bag, must be a Succotash passer. I love it!

In addition to the bouquet of comedy podcast clips included in this 'sode, and the chat with Mr. Crasnick, I've got a couple of other little tidbits: An audio sketch by Steve Shaw from New York, a short musical ditty by writer Chet Haase and a fresh new commercial from the good folks at Henderson's Pants. Speaking of which, our announcer Bill Heywatt is observing Lent this year and has sworn off the sauce until after Easter. So in lieu of Boozin' With Bill, we have him onboard reading an original poem, Ode To A Rose.

This episode is capped off, as usual, by friend-of-Succotash and top-notch political wag Will Durst in our Burst O' Durst. (Get more of him at http://WillDurst.com and watch him tweet as @WillDurst on Twitter!)

Comedy podcast-wise, here's who we have in this new episode:

This installment of AN is about three weeks old and was called in by Bob from the road. I'm a little concerned that there's been nothing new since then. Is Bob okay? You might check in with http://Earwolf.com or on iTunes to see if Mr. Ducca's been rescued.

The edgy, funny, politically savvy David Feldman continues to create entertaining content each week for his show on Peninsula radio, which is then released as a podcast. This particular clip delves into the news of the Richard Nixon love letters to wife Pat that were recently made public, and features Frank Conniff and Rick Overton doing the voice of Nixon. Catch all the fun at http://DavidFeldmanComedy.com, iTunes or on Stitcher.

After some 86 episodes, the guys behind this Seattle-based comedy p'cast are calling it quits. Well, not quits, but they ARE switching gears, changing formats and ditching the current title in favor of a new monthly show that will be performed in front of a live audience. This is part of their farewell announcement. 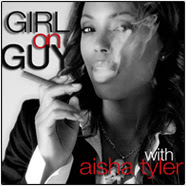 Providing a woman's touch to the heavily testosteroned world of comedy podcasts, comedian Aisha Tyler goes one-on-one with Jimmy Pardo. Pardo's Never Not Funny podcast set the bar for comedy podcasts when he hit the 'net in 2006 with a paid model for a show and he proved the exception to the rule that people wouldn't pay for such a thing. Check out the full conversation at http://GirlOnGuy.net, iTunes or download her smartphone app for iOS or Android.

Fun title for a rollicking show from Walla, Australia. The three hosts - Matt Olsen, Sheyne Halloran, and Dana Simpson - are less than a dozen episodes into the podcasting game so far, but they're such big supporters of Succotash that we figured we'd give 'em a spin. The focus of this particular clip was so captivating that it actually inspired this week's Henderson' Pants ad. See more of them at http://podsmack.net or on iTunes.

Booming out of the Baltimore area, comedian/radio personalities Rob Maher and Joe Robinson have pulled themselves from the rubble of terrestrial radio and now put this show on live, online, every Monday night at 7:30 PM EDT. It then gets the podcast treatment at http://RobAndJoeShow.com and on iTunes.

TAH is one of the hottest comedy tickets for live shows in Los Angeles. It stages once a month and sells out way in advance. Presented in the fashion of an old-style radio show, it's a perfect format for modern-style podcasting. This clip features TV star Nathon Fillion (Castle, Firefly) as Cactoid Jim, King of the Martian Prairie.

BTW, this 21st episode of Succotash originates from Studio P in Sausalito, California - The Home of The Hit! - and I want to thank our engineer/producer Joe Paulino for pulling it all together, as well as Scott Carvey, our Musical Director.

If there's a comedy podcast out there that YOU listen to (or that you HOST), feel free to tell us all about it via marc@SuccotashShow.com, on our Succotash Hotline at (818) 921-7212.